The global agricultural adjuvants market size was valued at USD 3.4 billion in 2020 and is anticipated to expand at a compounded annual growth rate (CAGR) of 4.1% from 2021 to 2028. The growth of the market is expected to be driven by the growing demand for effective insecticides across the globe. Moreover, increasing pesticide utilization in agriculture to increase crop production and yield is also driving the demand for agricultural adjuvants. Various types of adjuvants are used with pesticides for different purposes to increase pesticide penetration, wetting, and better retention, among others. 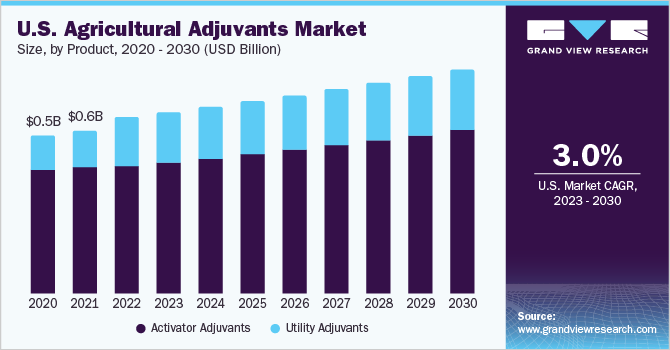 The increasing demand for food and beverages globally owing to the growing population is also a major factor for the agricultural adjuvants market. To meet the current demand for food, farmers are focusing on increasing the production and yield of the crops by using suitable pesticides which are driving the market. As adjuvants are made up of chemicals and petrochemicals, during production they may go under various chemical processes that release toxic gases and wastes. Adjuvants can be beneficial for the crop but can give harmful effects while consumption.

Various regulatory authorities such as Registration, Evaluation, Authorization, and Restriction of Chemicals (REACH), and the Environmental Protection Agency (EPA), among others address them by mapping and monitoring the toxicity emission within permissible levels. Regulations on agricultural adjuvants by various authorities in different nations are the major restraining factors for the market. For instance, in Brazil, the regulation for adjuvants was the same as the regulation for agrichemicals (Law 7,802 regulated by Decree 4,074) until 2017. In 2017, the Ministry of Agriculture, Livestock, and Supply (MAPA) is addressing the agricultural adjuvants in Brazil.

The demand for green adjuvant is expected to be high in the near future. Increasing focus on health and wellness among consumers is one of the major factors for the growth of green adjuvants. Consumers are gradually inclined toward organically produced foods in the U.S. Hence, companies are focusing on developing bio-based eco-friendly adjuvants such as organo-modified siloxanes, modified vegetable oils, and methylated seed oil, among others.

The activator adjuvants segment led the market for agricultural adjuvants and accounted for 70% of the global revenue share in 2020. They are extensively used in agrochemicals owing to ready availability and low price compared to utility adjuvants. The activator adjuvants include surfactants (non-ionic, cationic, and anionic) and oil carriers. Surfactants are the most commonly recommended adjuvants on herbicides mostly for systemic and water-soluble herbicides.

The utility adjuvants segment is expected to expand at a CAGR of 3.5% over the forecast period owing to the increasing use of pesticides to limit various unwanted things in the cropland. Utility adjuvants are of various types depending on the application. Key utility adjuvants include compatibility agents, drift control agents, buffering agents, and water conditioning agents.

The herbicide segment led the market for agricultural adjuvants and accounted for 48.6% of the global revenue share in 2020. Herbicides are extensively used pesticides in the agricultural sector. They are used to control various types of unwanted plants in the crops such as weeds. According to FAO, in 2019 over 2 million tons of herbicides were consumed globally. This is twice the number of insecticides used in 2019.

The insecticide segment is expected to expand at a CAGR of 4.7% over the forecast period. This growth can be attributed to the increasing demand for various crops such as cereals, grains, fruits, and vegetables, among others. They are found effective to prevent early germination pest attacks in various crops. 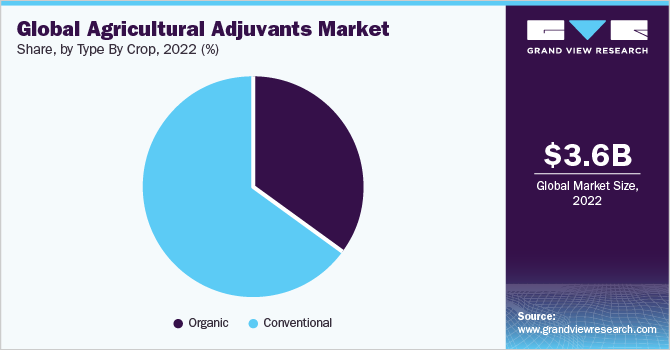 Asia Pacific dominated the market for agricultural adjuvants and accounted for a 36.8% share of global revenue in 2020, on account of several factors, including increasing demand for improved varieties of crops, increasing population, and the presence of countries with vast arable lands. The region’s per capita income is majorly dependent on the agricultural sector. Due to urbanization and industrialization in the region, the total arable land is shrinking. Thus, agriculturists opt for agrochemicals that help in increasing productivity and yield. Countries such as India, China, and Japan are the major contributors to regional market growth.

The market for agricultural adjuvants is highly competitive due to the presence of a large number of tier I, tier II, and local players. Manufacturers in the market offer a wide range of agricultural adjuvants including activity and utility adjuvants, for various applications such as herbicides, insecticides, and fungicides, among others. Competition among players is based on numerous parameters including quality, product offerings, innovation, sustainability, eco-friendly products offerings, corporate reputation, and price.

New product launches, innovation, geographical expansion, distribution network expansion, joint ventures, mergers & acquisitions are some of the key strategies being adopted by the players to strengthen their position in the market and gain a higher market share. For instance, in May 2020, Clariant AG launched its new formulation NBP. It is a new polar aprotic solvent for use in agricultural adjuvants Genagen formulations. Some of the prominent players in the agricultural adjuvants market include:

This report forecasts revenue growth at global, regional, and country levels and provides an analysis of the latest industry trends in each of the sub-segments from 2017 to 2028. For the purpose of this study, Grand View Research has segmented the global agricultural adjuvants market report based on type, application, crop, and region:

How big is the agricultural adjuvants market?

b. The global agricultural adjuvants market size was valued at USD 3.4 billion in 2020 and is expected to reach USD 3.5 billion in 2021

What is the agricultural adjuvants market growth?

Which segment accounted for the largest agricultural adjuvants market share?

b. Asia Pacific dominated the agricultural adjuvants market and accounted for a 36.8% share of global revenue in 2020, on account of several factors, including increasing demand for improved varieties of crops, increasing population, and presence of countries with vast arable lands.

Who are the key players in agricultural adjuvants market?

What are the factors driving the agricultural adjuvants market?