The global agricultural tractor market demand was expected to be at 1,974.7 thousand units in 2019 and is expected to expand at a CAGR of 3.0% from 2020 to 2027. This growth is attributed to rising demand for food products and increasing mechanization in the agriculture industry. Furthermore, rapid urbanization is promoting the migration to cities, resulting in farm labor shortage and thus propelling the demand for agricultural tractors. As per the data released by the UN, in 2018, around 55% of the global population lived in urban areas. This number is expected to reach 68% by 2050. 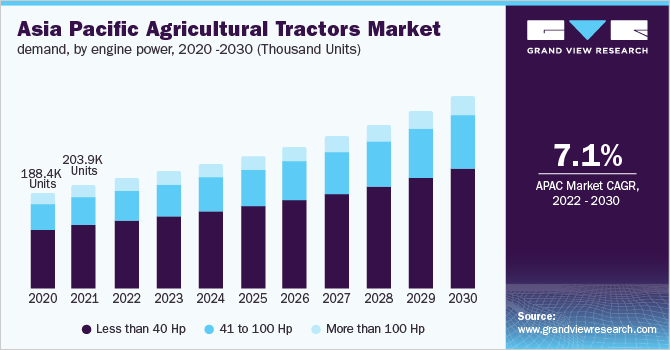 Government initiatives across the globe are further providing an impetus to the adoption of machineries for farming and other agricultural activities. For instance, the Indian government introduced the “Macro-Management Scheme of Agriculture” that provides a 25% subsidy on tractors up to 35 PTO HP. Similarly, the Canadian government has implemented the “Canadian Agricultural Loans Act” (CALA) program that provides farmers with a loan up to USD 500 thousand for purchasing land or tractor and repairing buildings. Such initiatives, along with increasing need for operational efficiency and rise in labor cost, are expected to boost the demand for agricultural tractors over the forecast period.

The market is also gaining momentum owing to the technological advancements that are revolutionizing the farming and agricultural processes. For instance, the implementation of agricultural tractors with self-driving capabilities is expected to increase productivity and efficiency in agriculture. Companies such as CNH Industrial N.V., Escorts Limited, and Deere and Company have already launched concepts for their autonomous and electric tractors. For example, in October 2019, Deere and Company announced the launch of its autonomous concept tractor that produces zero emissions and has a power output of 500 kW. Furthermore, in 2018, Escorts Limited announced the launch of its autonomous concept tractor that is designed specifically for precision farming.

Need for the replacement of existing machinery with advanced machines is expected to fuel the market growth. However, high cost of agricultural tractors is one of the prominent factors restricting market growth, especially in the developing economies. Similarly, taxes and import tariffs imposed by the governments of different countries are expected to hinder market growth. For instance, in 2017, the Republic of Turkey announced a 21% import duty on agricultural machinery imported from non-EU countries. Similarly, the government of India imposes a 29.8% import duty on agricultural tractors.

Shortage of skilled labor and increasing labor cost are expected to drive the market for agricultural tractors over the forecast period. Migration of people from rural areas to urban areas is one of the major reasons for this shortage. For instance, according to the data released by Our World in Data publication, in September 2018, the global urban population grew at a rate of 1.98% between 2016 and 2017. This growth has resulted in increased demand for food, which in turn has paved the way for the demand for agricultural tractors. 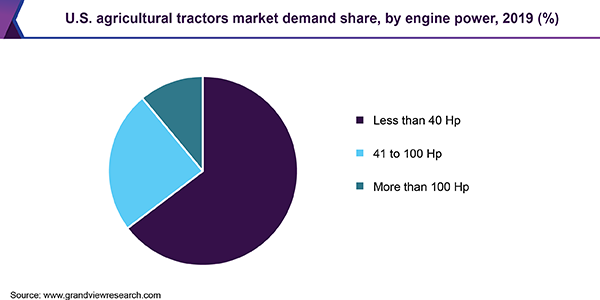 Asia Pacific held the largest share of over 65% in terms of volume. This is attributed to increasing demand for tractors in countries, such as China and India. In India, tractors play an important role in increasing the country’s agricultural output. The average annual sale of agricultural tractors in the country ranges from 600 thousand units to over 700 thousand units. Furthermore, Deere & Company announced that most of its tractors that are used in the U.S. are manufactured in India. The company exports around 30% of its tractors that are manufactured in India. Thus, the demand for agricultural tractors is projected to rise in this region from 2020 to 2027.

Europe is estimated to witness considerable growth in terms of volume during the forecast period. This growth is attributed to large farm sizes in various European countries, such as the U.K., Denmark, Hungary, Netherlands, and Spain. Farms in Europe managed around 38% of the total land area. In addition, according to the European Agricultural Machinery Industry Association, all the tractors introduced on 1st January 2018 were mandated to be equipped with lighting and braking features. Such mandates pertaining to technical requirements are expected to fuel the market growth. Additionally, presence of major companies such as CLAAS KGaA mbH and CNH Industrial N.V. in this region is expected to positively impact the market growth.

Market players are significantly investing in research & development to introduce technologically advanced agricultural machineries. The advent of self-driving tractors and the use of telematics for farming are anticipated to bolster market growth. For instance, in August 2016, Case IH, a brand of CNH Industrial N.V., unveiled its autonomous concept tractor and is researching on its autonomous technologies through its Autonomy and Automation Program. Similarly, in 2018, KUBOTA Corporation announced its plans to invest around USD 64.2 million in its new research and development center for tractors in Europe. The key objective of the company behind this initiative was to expand its business throughout Europe and enhance its sales.

Additionally, manufacturers are inclined towards catering to the growing demand for compact tractors with low engine power from developing economies that account for the majority of the share in the agricultural tractors industry. For instance, in 2016, Deere & Company announced its plan to focus on agricultural tractors below 40 HP for the Indian market in order to gain greater market share in the country. Furthermore, companies are focusing on mergers & acquisitions and alliances to cater to the end user requirements.

For instance, in November 2019, CNH Industrial joined a data interface project known as DataConnect. This interface project was launched by John Deere, CLAAS, and 365FarmNet. There are now five key farm equipment brands: John Deere, CLAAS, CNH Industrial, STEYR, and New Holland Agriculture, who have joined the DataConnect project, along with their respective telematics platforms. The data interface ensures the exchange of machinery data between the telematics platforms, which enables users to view all the brand information on a single platform.

This report forecasts volume growth at the global, regional, and country levels and provides an analysis of the latest industry trends and opportunities from 2016 to 2027 in each of the sub-segments. For the purpose of this study, Grand View Research has segmented the global agricultural tractor market report based on engine power and region:

How big is the agricultural tractor market?

What is agricultural tractor market growth?

Which segment accounted for the largest agricultural tractor market share?

Who are the key players in agricultural tractor market?

What are the factors driving the agricultural tractor market?

b. Key factors that are driving the market growth include rising demand for food products and increasing mechanization in the agriculture industry along with the technological advancements that are revolutionizing the farming and agricultural processes.