The global anime market size was valued at USD 24.80 billion in 2021 and is expected to grow at a compound annual growth rate (CAGR) of 9.7% over the forecast period. The growing popularity and the rising sales of Japanese anime content worldwide are anticipated to drive the growth of the market over the forecast period. As such, foreign sales are expected to contribute to substantial revenue generation in the market. The growing preference for internet distribution and application games, which account for the majority of overseas sales in Japan, is projected to play a decisive role in propelling the market growth. The outbreak of the COVID-19 pandemic has had a significant impact on the market. 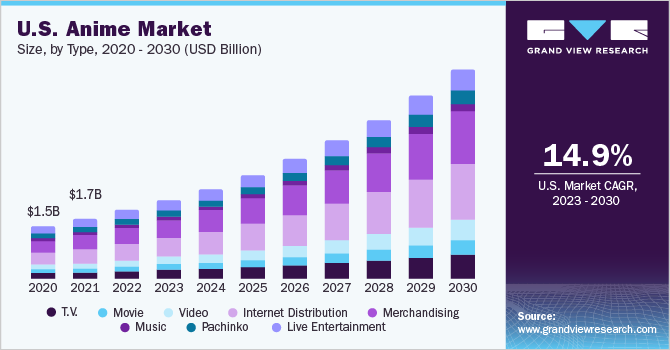 The month of April is usually considered the busiest of the year because of the start of new shows. However, several animated television programs, including those already in production, were either postponed or canceled in the wake of the outbreak of the pandemic. At the same time, theatre releases and live performances were also impacted as a result of the lockdowns and restrictions imposed on the movement of people as part of the efforts to arrest the spread of the coronavirus. On the other hand, streaming services, such as Netflix, have gained immense popularity. For instance, in Japan alone, the platform witnessed a sudden rise in the number of subscribers as individuals preferred spending most of the time watching animated series and movies.

Advances in the latest technologies, including Artificial Intelligence (AI), Virtual Reality (VR), Augmented reality (AR), and Internet of Things (IoT) among others coupled with the increasing levels of disposable income are expected to play a vital role in driving the market growth. The latest, most up-to-date, and technologically advanced gadgets, smartphones, and other mobile devices are increasingly being introduced in the market as technologies continue to advance. The rising levels of disposable income are allowing the young generation to invest in the latest smartphones and other gadgets. This is encouraging the consumption of anime content across the globe through various gaming applications, websites, and other sources.

Advances in cutting-edge technologies, such as VR, and the continued development of new, innovative VR gaming equipment are driving the popularity of anime games with virtual surround sound and in-game communication, which also bodes well for the market growth. The growing preference for the distribution of anime content over multiple platforms, including television, comics, Over the Top (OTT) streaming platforms, games, and social media among others, is equally expected to contribute to the market growth. At this juncture, animators, artists, publishers, developers, and other creative agencies are all working aggressively towards the development of new content.

For instance, in March 2021, Netflix Inc. announced its plan to introduce new anime shows at the AnimeJapan 2021 Expo in Tokyo. The company announced to launch  of40 anime shows at the event. The company announced its plans to launch double the number of anime shows and series in 2020. Furthermore, during the forecast period, the global market is expected to be driven by the rising popularity of media shows and rising consumer expenditure on online shows. The market growth is further aided by the increasing number of anime production firms and film artists. In Japan, the animation industry has made a substantial contribution to the country’s economic growth.

As a result, the government in the country is pursuing several supportive initiatives to fund the production of such films, serials, and games. In response to the growing popularity and the increasing demand for animated games and animation films, a number of animation companies are also emerging in other countries, such as the U.S., China, and France. In addition, these animation companies are collaborating with marketing and advertising agencies to realize their branding and marketing goals. All these factors will bode well for the growth of the global market over the forecast period.

Based on anime type, the market has been further segmented into video, T.V., merchandising, pachinko, movie, internet distribution, music, and live entertainment. The merchandising segment accounted for the highest share of more than 29.00% of the global revenue in 2021 and is anticipated to continue dominating the market during the forecast period. The popularity of anime merchandise including t-shirts, keychains, posters, and figurines is growing significantly among the young population. Moreover, this merchandise is available for sale through a variety of online and offline channels, thereby allowing easy access to consumers. As such, collecting figurines, keychains, t-shirts, and other anime character merchandise is emerging as a trend, thereby driving the segment growth. 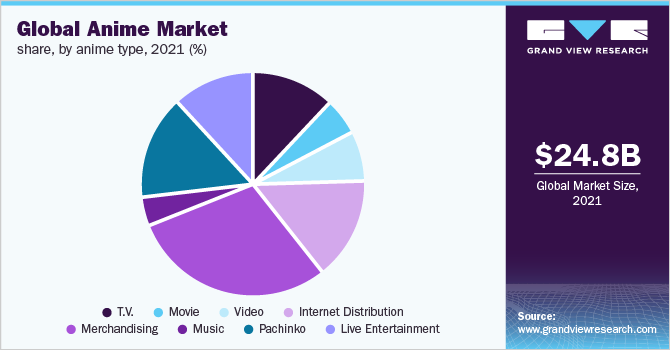 The internet distribution segment is anticipated to grow at the fastest CAGR over the forecast period. The growing sales of anime content via application games and internet streaming platforms, particularly in overseas markets, are expected to drive the segment growth. Online streaming services, such as Netflix and AbemaTV, are producing original animation content and shows as part of their efforts to gain a competitive edge in the market. For instance, in February 2020, Netflix partnered with six Japanese anime developers, namely Shin Kibayashi, Otsuichi, Mari Yamazaki, CLAMP, Yasuo Ohtagaki, and Tow Ubukata, to deliver original anime content.

Japan accounted for the highest market share of over 43.0% in 2021 and is expected to continue dominating the market during the forecast period. Japan is considered a hub of animation studios. There are around 622 animation studios in Japan, including around 542 in Tokyo alone. The growing popularity of manga, the Japanese comic novels, is particularly inspiring young and creative people to pursue a career in this industry. The Asia Pacific Ex. Japan's regional market is also anticipated to witness significant growth from 2022 to 2030 in line with the rising popularity of anime content among young individuals in China and India. The growing preference for developing in-house anime content in China is particularly expected to drive the growth of the regional market.

The Middle East and Africa (MEA) regional market is anticipated to grow at the fastest CAGR from 2022 to 2030 due to the growing fan base of anime content in the region. As a result, the sales of anime content including comic books & video games, and anime merchandise show no signs of abating. Several studios, such as Doleep Studios, The Company Films, and RD Content, are working toward catering to the rising demand in the region. The popularity of anime content is rising significantly in Saudi Arabia owing to the presence of one of the largest anime communities. The country is also witnessing an increase in the number of retail stores for anime in various cities including Khobar, Jeddah, and Riyadh.

At this juncture, market participants associated with the direction, shooting, production, editing, and planning of content have started emphasizing the use of advanced technologies to represent stories with high-end graphics. Key players in the market are adopting the latest, advanced technologies, such as 3D, blockchain, machine learning, AI, and VR, to offer an immersive experience to the audience and gain a competitive edge. Advances in these latest technologies are also allowing companies to explore innovative storyboarding techniques and cut production costs.

For instance, in November 2021, Masterpiece Studio, a 3-dimension creation, and animation software platform provider introduced a cost-free edition of Masterpiece Studio Pro. The new, advanced platform would offer a complete VR creative suite for artists and indie creators deploying 3-dimensional props and characters for animations, games, and metaverse. The platform can be deployed either as a standalone or with other 3-dimensional modeling VR and desktop applications. Some of the prominent players operating in the global anime market are:

This report forecasts revenue growth at global, regional, and country levels and provides an analysis of the latest industry trends in each of the sub-segments from 2018 to 2030. For the purpose of this study, Grand View Research has segmented the global anime market report on the basis of anime type and region:

How big is the anime market?

What is the anime market growth?

Which segment accounted for the largest anime market share?

b. Japan dominated the anime market with a share of 43.2% in 2021. This is attributable to increased sales of anime content across the globe.

Who are the key players in the anime market?

What are the factors driving the anime market?

b. The rising popularity and sales of Japanese anime content in other parts of the world apart from Japan are expected to drive the growth of the anime market over the forecast period.