The global antimicrobial coatings market size was valued at USD 2.44 billion in 2015. Growing concern regarding cleanliness in various professional industries has led the rapid development of this industry. These are used to protect surfaces against micro-organisms which primarily includes parasites, germs, bacteria and unwanted micro-organisms.

This was initially developed to deter the growth of micro-organisms on the surfaces to which they were applied. However, owing to growing health concerns & infections regarding the effect of such micro-organisms on people, they are now readily used to protect both surfaces and human. 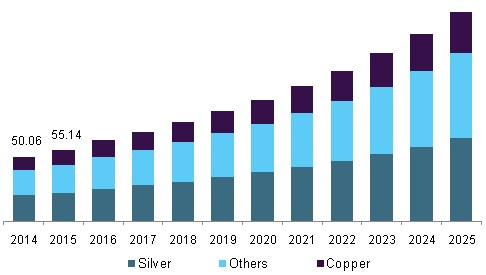 Rising concern regarding the growth of hospital-acquired infections among human beings is also an important factor to boost the overall industry growth. Nowadays, doctors prefer using these products as compared to disinfectants and powerful cleaning agents. This would also help to reduce both coat and time for the hospitals in which they are increasingly used. They help in stopping the spread of germs, which can otherwise cause weakened immune systems among people.

Never the less, health concerns related silver usage in various applications along with strict regulations in the European Union and the U.S. is presumed to create the hindrance for the overall demand. The SHER-NAR coating which primarily consists of three coat finishing process is required to meet the standards of the American Architectural Manufacturers Association’s specification. AAMA 2605-13 is considered the most stringent solution used mainly in architectural applications.

In recent past, the FDA began considering drug-device combinations as a separate regulatory class. They meet the safety and efficacy part based on specified requirements. Moreover, the guideline has also been established for urological devices with antimicrobial claims.

In recent past, the antibiotic local application directly on the local surface is considered more efficient as compared to antibiotics penetration through biofilm. The bacteria is killed instantly before the biofilm is formed. These antibiotics can be applied in bone cement that is used to fix implants associated with orthopedic and orthodontic implants.

Biodegradable surface type containing antibiotics can also be implemented for the same application with the similar strategy. The antibiotics can be slowly released directly to the surface-tissue interface. The use of poly(D, L-lactide) which contains gentamycin on orthopedic implants has reduced the infection rates drastically and also an improvement in recovery after infection.

The application of silver nanoparticles directly on medical devices has been used recently to avoid bacterial adhesion and also from the formation of biofilm. The silver is released in bacteria that help in killing the bacteria near the surface.

The key application included in the report include sanitary facilities and kitchen, air conditioning and ventilation systems, food processing and packaging, antimicrobial textile, construction, mold remediation and others segment. Other applications mostly include insulation products and touch screen and switches. 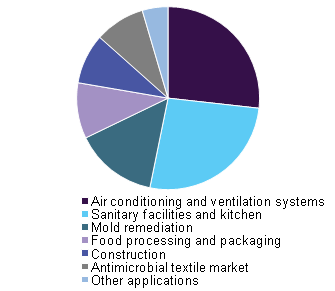 Air conditioning and ventilation systems were the leading segment and accounted for 26.8% of total volume in 2015. Lots of initiatives and research are being taken by EPA with CEFPI to educate schools about air quality. The growth of micro-organisms can be reduced if there are moisture control, reduced temperature, and nutrient supply.

North America dominated the regional market and accounted for over 35% of overall volume in 2015. The region is anticipated to be the witness the highest CAGR for antimicrobial coatings at a rate of 11.1% from 2016 to 2025.

High living standards coupled with rising healthcare expenditure in the U.S. are anticipated to remain a driving factor for assisting the market growth. However, the growth of major end use industries such as medical, construction and food mainly in China and India will serve as major opportunities for companies to invest in Asia Pacific.

The industry is reasonably concentrated with top three to four companies catering to over 40% of global demand in 2015. The industry displays oligopolistic features with a few gig companies holding a major share of the total revenue generated by the overall market. Some of the leading companies operating in the global industry include AkzoNobel NV, Damond Vogel, Dow Microbial Control and Sherwin-Williams among some other companies.

This report forecasts volume & revenue growth and provides an analysis on the latest trends in each of the sub-segments from 2014 to 2025. For the purpose of this study, Grand View Research has segmented the antimicrobial coatings market on the basis of product, applications and region: