The global atomic layer deposition market size was estimated at USD 1.7 billion in 2021 and is anticipated to expand at a compound annual growth rate (CAGR) of 12.3% from 2022 to 2030.  Growing demand for the semiconductor chips used for various electronic products is expected to enhance semiconductor manufacturing industry output during the forecast period. The atomic layer deposition (ALD) technique is being used for depositing materials during semiconductor fabrication. COVID-19 impacted negatively and restricted the atomic layer deposition market growth due to a significant impact on the semiconductor industry. The demand for industrial manufacturing of lithium-ion batteries as well as solar cells also impacted the overall market growth. The market is expected to recover with increasing precautions and vaccinations during the forecast period. 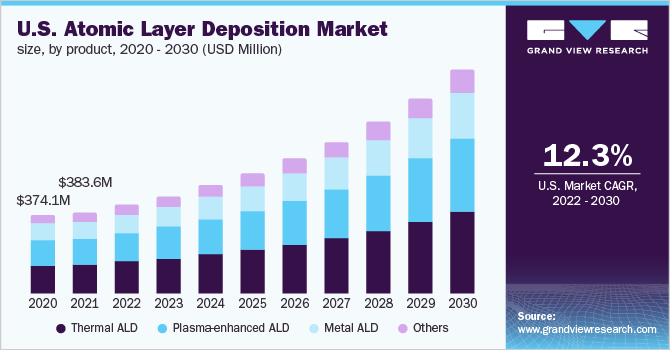 Growing concerns about global warming and environmental pollution have motivated governments around the globe to invest in and encourage the use of electric vehicles. Lithium-ion batteries market, subsequently, is gaining momentum for their use in vehicles as a source of energy. The application of atomic layer deposition for deposition of the Nanostructured materials in lithium-ion batteries is positively affecting the market growth.

Demand for lightweight, portable devices has been rising quickly due to the development of numerous innovative and energy-efficient technologies. Atomic layer deposition technology is widely used for the fabrication of semiconductor chips.  Rising demand for electronic devices is ultimately expected to drive the atomic layer deposition market growth during the forecast period.

Thermal ALD led the product segment and accounted for 36.3% of the global revenue share in 2021. This type of atomic layer deposition technique forms uniform layers with surface control and conformity irrespective of the surface geometry. It is widely used for depositing aluminum-containing molecules. The rising demand for aluminum oxide film, using this deposition technique, is also anticipated to increase industrial penetration.

The deposited aluminum oxide film is known to contain effective permeation barriers owing to alumna’s pin-hole-free morphology and uniformity. Moreover, its excellent properties, ease of access to precursor materials, and stability on various substrates are the factors contributing to the segment's growth.

Plasma-enhanced ALD segment is the fastest growing among all the products, registering a CAGR of 12.6% during the forecast period. The rise in the demand for this product is due to its advantages, such as encouraging the deposition of thin films at lower temperatures and a higher growth compared to traditional deposition approaches like thermal ALD.

The extensive research initiatives for the technology concerning enhanced nucleation have resulted in the deposition of particles and polymers. This technology type holds a smaller share of the overall market due to high capital costs and specific applications. For instance, ALD on polymers mitigates numerous challenges concerning space polymers. However, it reduces the rate of oxygen-atom erosion and vacuum ultraviolet of polymers in spacecraft.

The electronics & semiconductors segment has led the market and accounted for 45.2% of the global ALD market revenue share in 2021. Increasing demand for electronic components in the automotive industry is anticipated to propel the demand for semiconductors, positively impacting the atomic layer deposition market. According to the World Economic Forum, semiconductor companies are increasing their manufacturing throughput to cater to the demand.

The solar devices segment is projected to be the most opportunistic segment during the forecast period. As the environmental effects of utilizing conventional devices and powers result in emissions, specific initiatives have been taken by the government to move towards extensive usage of green energy. Additionally, the rising acceptance and popularity of solar gadgets would drive the segment's growth. 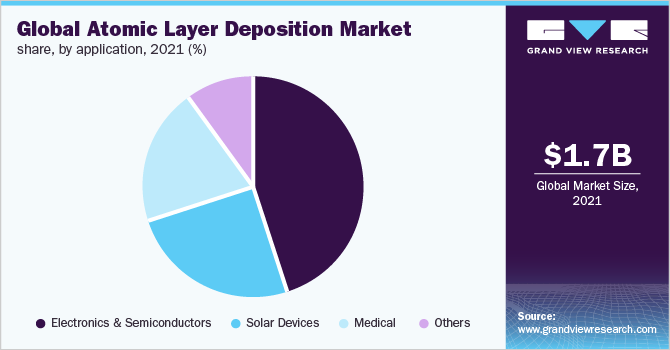 The rising problems of global warming have resulted in the change of government aims to decline carbon footprint, resulting in the growing adoption of environmentally friendly technologies. Accordingly, increasing demand for electric vehicles is seen across the world. The growth of electric vehicles is contributing to increasing demand for lithium-ion batteries and subsequently drives demand for the atomic layer deposition.

The changing consumer preference and government initiatives to reduce greenhouse gas emissions have resulted in the swift growth of the solar sector. The technique is widely used for conformal coatings in solar cells and devices. Solar devices are expected to be the fastest-growing application sector during the prediction period.

Asia Pacific held the largest market share accounting for 40.6% revenue share in 2021, owing to the existence of several electronics manufacturers in the economies. Further, the increased government spending on building infrastructure to attract top electronics and automotive manufacturers to locate manufacturing facilities in the region is expected to favorably impact the expansion of the market in this region.

The deep-rooted electronics manufacturing base in South Korea, China, and Taiwan has led to eased demand for deposition technologies. The proliferating manufacturing of electronics products, tremendous modernization, and growing economies coupled with rising consumer electronics spending have backed up the growth of this region. 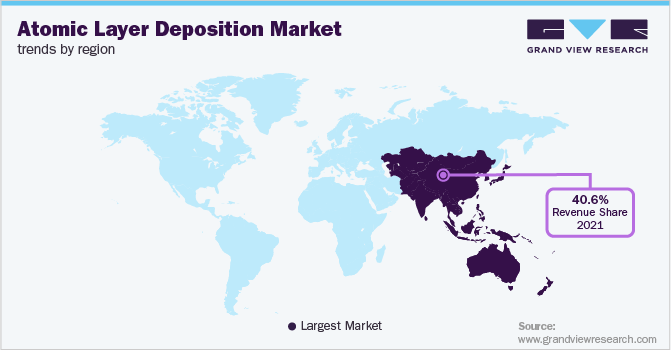 North America is expected to witness substantial growth, registering a CAGR of 12.2% over the forecast period. The manufacturing of Li-ion batteries and solar systems in the U.S. is being fueled by the growing number of solar energy projects and data centers built across the U.S. to meet the need for renewable and sustainable energy sources.

Adequate government regulatory support for promoting domestic-level private investment is projected to be a key driver for the expanding semiconductor and consumer electronics industry in the European region. Furthermore, development in the interest for nuclear layer testimony, particularly in Germany and France, is developing the utilization of nuclear layer statements for various end-client applications.

Some major companies have undertaken recurrent technological upgrades and product launches for manufacturing superior quality conformal films and gaining sustainability in the sector. For instance, in July 2021, Pico Sun Group, a Taiwan-based distributor of high-tech equipment, collaborated with Hermes-Epitek Corporation Pte. Ltd to produce a worldwide network of its semiconductor and optoelectronic manufacturing equipment sales and service. Some of the prominent players in the global atomic layer deposition market include:

This report forecasts revenue growth at global, regional & country levels and provides an analysis on the industry trends in each of the sub-segments from 2017 to 2030. For this study, Grand View Research has segmented the global atomic layer deposition market based on the product, application, and region: 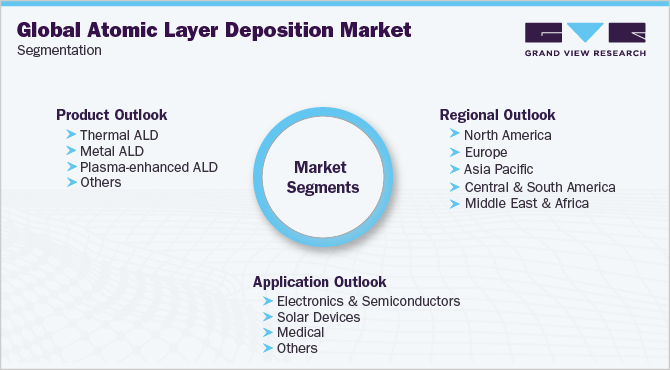 How big is the atomic layer deposition market?

b. The global atomic layer deposition market size was estimated at USD 1.7 billion in 2021 and is expected to be USD 1.8 billion in 2022

What is the atomic layer deposition market growth?

b. The Asia Pacific accounted for the largest market share in the global atomic layer deposition market owing to the presence of electronics and semiconductor, solar cell manufacturing in the region

Who are the key players in the atomic layer deposition market?

What are the factors driving the atomic layer deposition market?

The exponential spread of COVID-19 worldwide has had an adverse impact on the semiconductor industry with manufacturing facilities temporarily shut, leading to a significant slowdown in the production. The outbreak could result in disruption across the ecosystem with several supply chain participants shifting their production facilities outside China, thereby reducing their over-reliance on China. Lockdowns imposed by the governments in the wake of the outbreak not only affected manufacturing but also hauled consumer demand for semiconductor devices. Our analysts predict a decline in semiconductor revenue by over 1% in 2020 as compared to that in 2019. The report will account for COVID-19 as a key market contributor.