The global automotive axle market size was valued at USD 87,133.0 million in 2018 and is projected to register a CAGR of 4.1% over the forecast period. In terms of volume, the market size is expected to reach 423.0 million units by 2025. The growing consumer preference for hybrid vehicles featuring advanced technology is anticipated to boost the market growth over the forecast period. The commercialization of new technologies to reduce the overall vehicle weight and the growing automotive production across the world are also expected to drive the demand for automotive axle. 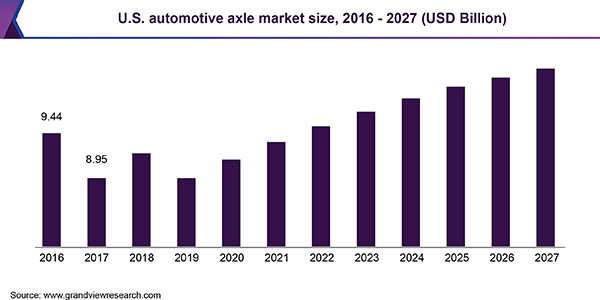 Regulatory bodies in several countries have laid down stringent regulations to limit vehicular emissions and enhance road safety. For instance, in some European countries as well as in China, strict rules have been imposed to encourage the use of hybrid vehicles to reduce the carbon footprint. Similarly, the Mass and Dimensional Regulation published by the European Economic Community (EEC) takes into consideration the issues associated with safe driving for heavy commercial vehicles. All such initiatives to encourage the use of hybrid vehicles are expected to subsequently encourage automotive axle manufacturers to develop innovative automotive axles suitable for hybrid vehicles.

The growing popularity of autonomous and semi-autonomous vehicles is another major factor that is expected to drive the market growth over the forecast period. Autonomous cars, which are also known as self-driving cars, driverless cars, or robotic cars, are vehicles that can sense the environment surrounding them and move safely. They feature advanced technologies that allow them to operate with little or no human interference. The increasing demand for road freight transport, which is subsequently driving the demand for light and heavy commercial vehicles, is also expected to play a crucial role in driving the demand for automotive axle.

Based on type, the market has been further segmented into drive, dead, and lift. The drive axle segment held the largest market share in 2018 as automakers focused on delivering higher torque and optimizing the vehicle performance. However, the segment is estimated to register a minimal CAGR over the forecast period. The growing demand for all-wheel-drive vehicles would take a toll on the adoption of drive-type automotive axles.

On the other hand, the lift axle segment is anticipated to register a significant CAGR over the forecast. Lift axles are being increasingly used in heavy commercial vehicles. A lift-type automotive axle helps in reducing the operational costs, increasing the load-carrying capacity, and improving the fuel efficiency of the vehicle. According to the European Economic Community’s Mass and Dimensional Regulation, the determined load carried by each automotive axle is limited and the suitable liftable automotive axles should be dropped automatically to obtain an adequate load distribution.

The rear application segment dominated the market in 2018 and accounted for a market share of 56.0% in terms of volume. However, the segment’s volume market size is expected to plummet considerably over the forecast period. The anticipated decline in the segment’s volume market share can be attributed to the increasing demand for front-wheel-drive vehicles. The fact that the production process of a rear automotive axle relies on the specific vehicle type is also expected to restrain the demand for rear automotive axle over the forecast period.

The passenger car segment dominated the automotive axle market in 2018 and accounted for a 66.0% revenue share. The passenger car segment has been a dominant segment owing to the increasing production of automobiles across emerging economies, such as South Africa, Indonesia, India, and Mexico. The automotive industry has witnessed an average growth of more than 3% over the past five years owing to the growing consumer preference for hybrid and luxury vehicles featuring advanced technologies. The increasing production of all-wheel-drive vehicles is expected to encourage automotive axle manufacturers to introduce latest automotive axles for hybrid and luxury passenger cars. 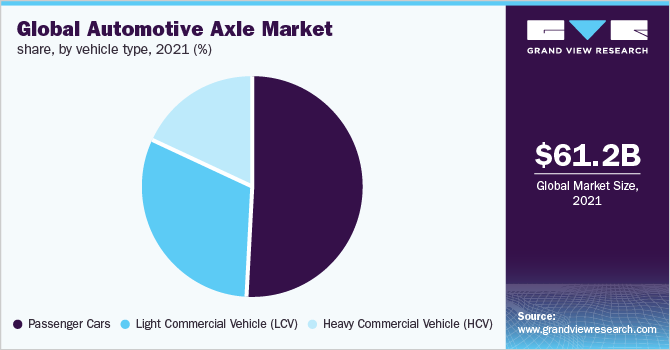 The key players in the market include Dana Incorporated; ZF Friedrichshafen AG; American Axle & Manufacturing Inc.; Daimler AG; and Melrose Industries PLC; among others. These companies accounted for a significant share of the global market in 2018. Automotive axle manufacturers are signing collaborative agreements and striking alliances with automotive original equipment manufacturers (OEMs) to strengthen their foothold in the market. For instance, in January 2018, American Axle & Manufacturing, Inc. partnered with Drexler Automotive GmbH to incorporate high-performance differential and differentials technologies into SUVs, passenger cars, crossovers, and light trucks.

The growing popularity of autonomous and hybrid vehicles and the increasing awareness about vehicle safety are some of the crucial factors that are opening growth opportunities for automotive axle manufacturers. The growing demand for comfortable and safer automobile functions has also triggered the demand for technologically-advanced automotive axles. As such, companies are aggressively investing in research and development activities to develop highly advanced automotive axles and defend their position in the market. For instance, in September 2018, Dana Incorporated launched the new Spicer 175 series single drive axles ideal for North American linehaul trucks and European heavy-duty vehicles.

This report forecasts revenue growth at global, regional, and country levels and provides an analysis of the latest industry trends in each of the sub-segments from 2015 to 2025. For this study, Grand View Research has segmented the global automotive axle market report on the basis of type, application, vehicle type, and region: