The global automotive engine oil market size was valued at USD 35.7 billion in 2021 and is projected to rise at a compound annual growth rate (CAGR) of 3.2% in terms of revenue from 2022 to 2030. This is attributed to growing automobile production and demand for synthetic and conventional products. Sales of the automotive vehicles are witnessing a constant growth over the past few years, majorly in Europe and Asia Pacific regions owing to the rising population and consumer spending capacity. The market is expected to witness substantial growth during the forecast period due to the high level of technological innovations implemented in the overall automotive industry. The emerging need for high-performance engine oils is ever-growing due to tactical vehicle mechanisms and operational blueprints being implemented by multinational automobile manufacturers. 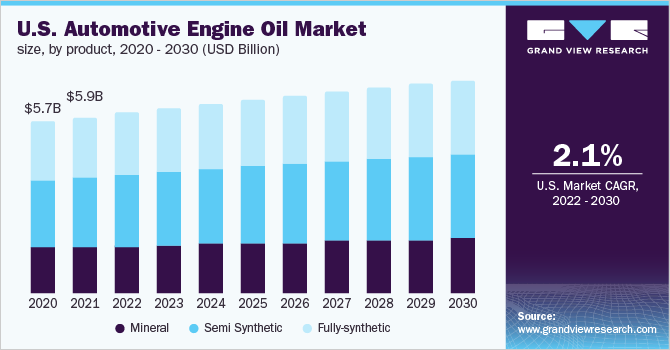 Raw materials such as base oil and additives are used in formulating the product. Crude oil exploration is mainly concentrated in countries such as Venezuela, Saudi Arabia, and Canada. Crude oil processing companies that are engaged in producing heavy carbon fraction and base oil are concentrated in the U.S., China, Russia, and Japan. Saudi Aramco, Marathon Petroleum, and Exxon Mobil are some of the key producers of the raw materials used in manufacturing automotive engine oil.

The global automotive engine oil market is characterized by the integration of raw material suppliers. Base oil availability is the major factor that influences the value chain consisting of the manufacturers. The starting material base oil is obtained from the fractional distillation of crude oil. Several multinationals have a well-established, integrated value chain and are engaged in manufacturing raw materials as well as supplying engine oils as the finished products. These companies are integrated across multiple stages of the value chain in order to maintain a continuous supply of raw materials and ensure low manufacturing costs.

The fully-synthetic grade type is projected to play a crucial role in the further development of vehicle engines. Across the automotive industry, consumers demand smaller engine vehicles with great fuel efficiency and high performance. Vehicle manufacturers have started using turbochargers for engines, which leads to an increase in engine temperature. In such engines, synthetic oil performs smoothly even at high temperatures.

The fully-synthetic segment accounted for the highest revenue share of over 35% in 2021. This is attributed to multiple desirable characteristics which include increased lubrication, better stability, reduced degradation, lower deposits, and more. It offers three times advanced engine protection as compared to traditional mineral oils, up to five times higher cleansing properties, and restricts engine wear & tear by almost half as compared to mineral engine oils.

The semi-synthetic was the second-largest segment in 2021 and is expected to expand at a CAGR of 3.2% in terms of revenue during the forecast period. This is attributed to its benefits such as better component protection and higher performance. Semi-synthetic engine oil typically comprises around 20% to 30% synthetic base which gives them the ability to outperform mineral-based engine oils. They are usually more stable across a broader range of temperature scales as compared to mineral oils.

Mineral grade type is a lubricant that is directly formulated from crude oil and possesses characteristics that enable the product to be used as a lubricant in high temperatures, thereby ensuring high stability of the engine over a long duration of time. High-quality mineral grade type ensures that the engine is clean, which in turn helps the vehicle to increase its fuel economy as well as in extending engine life by protecting the internal components. Also, they are comparatively cheaper than their synthetic and semi-synthetic counterparts.

The diesel segment accounted for the highest revenue share of over 50% in 2021. This is attributed to its far superior anti-wear load which is typically in the form of ZDDP (zinc dialkyl dithiophosphate). Unlike gasoline or natural gas-charged engines, the diesel type has a comparatively higher viscosity and possesses more additives to deliver higher performance. Among the multiple formulators of this type, the majority of the market share is captured by Castrol, ExxonMobil, and Royal Dutch Shell.

Gasoline was the second-largest segment in 2021 and is expected to expand at a CAGR of 3.2% in terms of revenue during the forecast period. This is attributed to high leaching loss resistance and excellent solubility. Ammonia is an important pillar of the nitrogen fertilizer industry. It has nitrogen content higher than any other commercial counterpart. Ammonia can either be applied directly to the soil as a plant nutrient or converted into other nitrogen fertilizers.

Multinationals such as HP Lubricants have introduced their own line of engine oils (HP GASENOL 20W 50) specifically for CNG and natural gas-driven engines. These products are not only used in heavy-duty trucks but also in smaller segment passenger cars. The product crafted for natural gas-based engines have the ability to start at a low ambient temperature range and also protect the engine against nitration and oxidation, which usually occurs due to high-temperature combustion in LNG fuels.

The passenger cars segment held the largest revenue share of over 35% in 2021. This is attributed to the growing disposable income and swiftly growing urban population. Consumer preferences in the passenger vehicle segment across advanced economies such as North America and Europe have changed over the past decade. Consumers now desire to purchase vehicles with reduced carbon emissions and also consume less fuel yet provide outstanding overall performance. These factors have led to immense foreign investments in the sector in order to formulate a product that meets the current market demand.

Heavy-duty vehicles were the second-largest segment and are anticipated to register the highest CAGR of 3.7% in terms of revenue during the forecast period. This is attributed to the growing urbanization which has led to the increased usage of off-highway construction vehicles. Engine oil manufacturers are formulating products that help reduce emissions and are in line with BSIV compliant on-road heavy-duty vehicles that use modern Selective Catalytic Reduction engines. 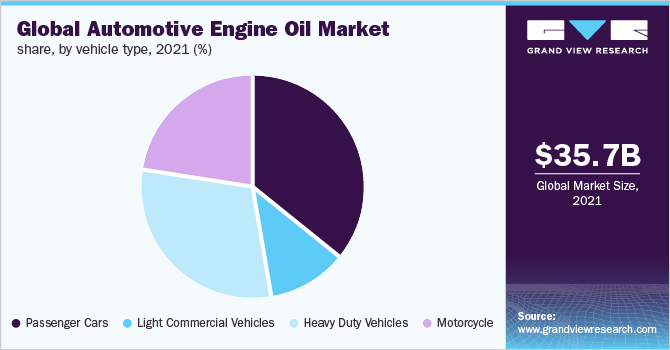 Light-weight engines usually produce a lower amount of soot as compared to their counterparts. Heavy-duty type contains a higher amount of dispersant additives and detergents as they need to increase the oil drain intervals. The product is formulated such that its utility is applicable across all vehicle types and is adapted by consumers as per their vehicle application preferences.

Asia Pacific region accounted for the largest revenue share of over 40% in 2021. This is attributed to the presence of a large consumer base and increasing production and consumption of the product in countries like China. Product formulators such as Total are increasingly investing in the Asia Pacific region to tap the growing potential. Automotive Multinationals operating in the region have started investing heavily in digitizing their production facilities for faster output delivery.

China is rapidly advancing in terms of automation and robotics, with major automotive manufacturers investing heavily in the market. A significant driving factor of the product in China and the overall Asia Pacific is the interval of an oil change. In regions such as Europe and parts of America, the change occurs at around 30,000 km for ordinary passenger vehicles. In Asian countries, vehicles are manufactured in a manner that requires their oil change after every 5,000 to 10,000 km depending upon the usage of the vehicle.

North America was the second-largest regional segment in terms of revenue in 2021 and is anticipated to witness a CAGR of 2.3% in the coming years. This is attributed to the rising demand for commercial vehicles from the e-commerce and logistics industry in the region. The U.S. has recorded high sales of on-road diesel fuel power vehicles as compared to off-road diesel fuel-driven vehicles, as per the U.S. Department of Energy. The country uses a substantial amount of diesel fuel, as compared to gasoline or natural gas alternatives, due to high fuel economy and lower carbon emissions.

The distribution channels in the market include third-party distribution channels, direct supply agreements to industrial users, and the company’s own distribution network. Direct supply agreements are getting popular as end consumers are entering into agreements with companies for ensuring uninterrupted supply and cost benefits through the foreseeable future. Third-party logistics has become a global phenomenon due to the presence of several multinational companies consuming variable quantities of the product. Some prominent players in the global automotive engine oil market include:

This report forecasts revenue growth at global, regional, and country levels and provides an analysis on the latest industry trends in each of the sub-segments from 2018 to 2030. For the purpose of this study, Grand View Research has segmented the global automotive engine oil market report on the basis of grade, engine type, vehicle type, and region:

How big is the automotive engine oil market?

b. The global automotive engine oil market size was valued at USD 35.7 billion in 2021

What is the automotive engine oil market growth?

b. Asia Pacific region accounted for the largest revenue share of over 40% in 2021. This is attributed to the presence of large consumer base and increasing production and consumption of the product in countries like China.

Who are the key players in automotive engine oil market?

What are the factors driving the automotive engine oil market?

b. The market growth is attributed to growing automobile production and demand for synthetic & conventional products