The global cattle feed market size was valued at USD 74.8 billion in 2019 and is expected to grow at a compound annual growth rate (CAGR) of 3.2% from 2020 to 2027. The industrialization of cattle products like meat and dairy products, along with the growing population, has positively influenced the market globally. The increase in consumer awareness about the safety of meat and milk products, along with the nutritional content of the food, emerged as the key driver for market growth. Cattle can be segmented into young ruminants and mature ruminants. Based on the age of these ruminants, the additives include amino acids, vitamins, feed acidifiers, antibiotics, feed enzymes, antioxidants, and others. Vitamin A and mineral pack products like Availa-4, 20-10 Plus Mineral are widely used to improve immune function, reproduction, and vision and reduce cattle’s deficiencies. Cattle feed mainly comprises fodder, legumes, grass, silage, and also includes hay and dry forages. Rising demand for feed to add nutritive value and increase the cattle’s efficiency is estimated to fuel the market growth. 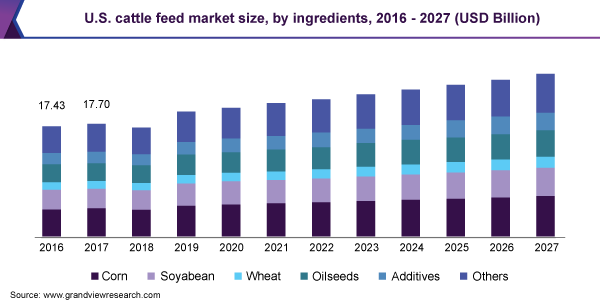 The emergence of Covid-19 in the capital of Hubei province, Wuhan, has taken a toll on the supply-demand of ingredients and additives, as China is a major raw material manufacturer in the region. In addition, transport restrictions to and fro from the country prevented vital ingredients, such as soybean meal, from being delivered to the cattle farms. Even though China has lifted the ban from the transportation of essential products, manufacturers in the country are still facing issues to get their products out of the country.

The majority of the global supply of ingredients, including Vitamin B & D, lysine, and threonine, is manufactured in China. Major product consumers in North America and Europe have suffered the most during the pandemic due to delayed exports and disruptions in shipping. This also resulted in a price hike due to supply chain bottlenecks. However, ease in restrictions for essential commodities across the globe is estimated to boost the product demand.

Corn was the leading ingredient segment in 2019 and accounted for more than 25.0% of the global revenue share. Major grain manufacturers, such as Cargill, Inc. and BASF SE, are integrated along the value chain to provide feed ingredients and serve as a comprehensive supplier to manufacturers and reduce sourcing and logistics costs. Few companies, such as Charoen Pokphand (CP) and Alltech, are also integrated backward to produce raw materials (feed grains) and end products to cut down on raw material costs.

Increasing consumer awareness regarding the disease caused in livestock animals, including foot & mouth diseases, has raised concerns regarding meat quality and safety, which has prompted the use of quality feed ingredients. Overlapping demand for major grains, such as barley, maize, and wheat, from other commercial applications, such as biofuel and food industries, is expected to restrain the market growth over the forecast years. However, in current times, there has been a significant rise in partnerships and M&A among market participants, enhancing the brand portfolio, gaining access to regional markets, and providing appropriate benefits, which is estimated to trigger the product demand.

Some of the most prominently used amino acids in the animal feed additive industry are lysine, methionine, and cysteine. Lysine acts as a building block for protein in the animal body. As animals are not capable of producing this amino acid in sufficient quantity, it is provided through diet or supplementation. Methionine is an essential amino acid and a potent antioxidant, which is vital for animal liver and detoxification. It also aids in preventing nail and skin problems in animals. This amino acid is also known as grass saver, as it is often added in dog food to lower the acid level in urine. Thus, the amino acid is projected to have a high demand from the cattle feed industry as a feed supplement, over the forecast period.

Feed additives are manufactured and distributed by different participants in the form of premixes, through mills and distributors. These industry participants sell additives directly to the consumers by their brands or supply feed additives to integrated feed producers. With recurrent regulatory updates and rising R&D spending, the market is continually developing. However, the restriction on antibiotic use in developed economies of the U.S. and Europe is predicted to open the market for alternative products, including amino acids, acidifiers, and enzymes.

The dairy segment accounted for more than 54% share of the global revenue in 2019. The United Nations Food & Agriculture Organization (FAO) projected an increase of 55% in dairy products and 70% in beef products by 2050. The segment’s growth can be attributed to increasing demand for dairy and milk products in the emerging economies, thus resulting in the augmented industrialization of cattle rearing. 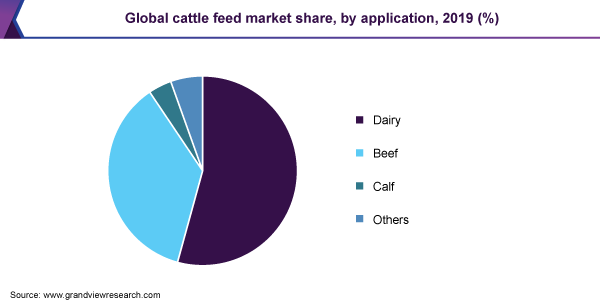 The value of cattle and calf production in the U.S. is rapidly increasing from 2010 due to high demand and rising competition in the market. Manufacturers are inclined towards product innovation and are offering customized products for dairy and beef applications. In September 2018, Kemin Industries, in collaboration with Micronutrients, launched Intellibond Vital 5 Cr containing six necessary trace minerals to support dairy and beef cattle health and performance.

North America led the market and accounted for over 34% share of the global revenue in 2019. Growing meat consumption, mainly in the U.S., coupled with stringent regulations regarding meat quality, is expected to drive the regional market over the forecast years. Furthermore, easy and abundant availability of raw materials, such as maize and dextrose, in the region is expected to augment the market growth. Asia Pacific is estimated to register the fastest CAGR from 2020 to 2027. Emerging economies like China and India are witnessing rapid growth in cattle inventory since the last decade due to a high population and a significant rise in meat consumption. This has resulted in higher demand for cattle feed in the region.

Spain and Germany emerged as significant markets in Europe. The presence of 330 feed mills in Germany will support market growth in Europe. In addition, pork and cattle share of more than 65% of the overall animal feed consumption is witnessed across Spain, hence emerged as the biggest driver for the Spanish cattle feed industry. Free trade agreements in the region for the European Union countries will positively influence market growth over the forecast period.

The global market is extremely competitive and moderately fragmented with leading companies accounting for the majority of the market share. The introduction of customized products in conjunction with application development and distribution channel expansion is expected to be a critical factor for the industry participants. In addition, frequent mergers and acquisitions are undertaken to diversify the product portfolio and gain a higher market share, and to enhance their regional presence, specifically in unorganized markets, such as China, Brazil, and India. Some of the prominent players in the cattle feed market include:

This report forecasts revenue growth at global, regional, and country levels and provides an analysis of the latest industry trends in each of the sub-segments from 2016 to 2027. For the purpose of this report, Grand View Research has segmented the global cattle feed market report on the basis of ingredients, application, and region:

How big is the cattle feed market?

What is the cattle feed market growth?

Which segment accounted for the largest cattle feed market share?

b. North America dominated the cattle feed market with a share of 34.8% in 2019. This is attributable to growing meat consumption, mainly in the U.S., coupled with stringent regulations regarding meat quality.

Who are the key players in the cattle feed market?

What are the factors driving the cattle feed market?

b. Key factors that are driving the cattle feed market growth include the industrialization of cattle products like meat and dairy products, along with a growing population. An increase in consumer awareness towards the safety of meat and milk products, along with the nutritional content of the food, emerged as the key driver for the market growth.