The global caustic soda market size exceeded 74.0 million tons in 2015. Caustic soda accounts for over 40% of the total inorganic chemicals and finds application in various applications such as pulp and paper, chemicals, alumina, soaps and detergents, and textiles. The growth of the market for caustic soda is directly linked to expansions in end-use industries. Increasing demand from pulp and paper as well as textile industries is expected to foster market growth over the forecast period.

Caustic soda serves as a strong alkali compound and readily reacts with various substances, including zinc and aluminum. This is another major factor likely to propel product demand in metallurgical applications. The market is further expected to accelerate with increase in product consumption in alumina extraction. 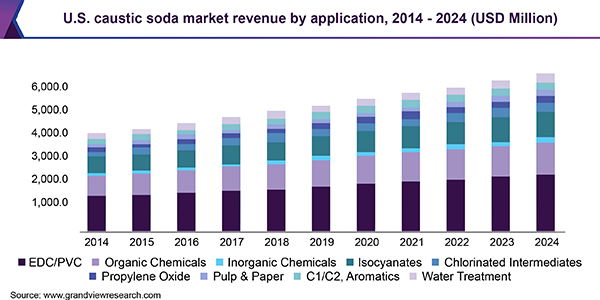 High corrosive and reactive nature of caustic soda has a harmful impact on the environment and this is expected to pose a challenge to market growth. Also, limited consumption of PVC is likely to affect chlorine demand and thereby its production. Caustic soda is a by-product of the chlorine manufacturing process, and as a result, lower production rates for chlorine will have an adverse impact on the production of caustic soda in the coming years.

The market in Asia Pacific is growing significantly due to increasing consumption of the product across industries such as aluminum and textiles. On a global scale, while demand for organic and inorganic chemicals as well as soaps and detergents may be growing at a moderate pace, the domestic overall consumption of caustic soda in Asian countries will continue to grow at a rapid pace.

Apart from the organic application scope of sodium hydroxide, the product has several applications in inorganic chemical formulations as well. Inorganic chemicals such as glass, paints, cosmetics, and ceramics utilized for the production of fuel cells also accounts for a majority stake in the global demand for caustic soda.

The textile sector is expected to emerge as the fastest growing application segment, generating revenue worth over USD 8.0 billion by 2024. In the textile industry, caustic soda is used to remove waxes and oils from fiber, making it receptive to bleaching, dying, etc. Treatment of textile with caustic soda lends greater tensile strength and luster to the fabric. Caustic soda is also used in manufacturing manmade fibers.

Other application segments such as water treatment and soap and detergents will witness steady growth over the course of the forecast period. The growth of these segments is dependent upon evolving demand for cleaning applications.

Asia Pacific is anticipated to emerge as the fastest as well as largest regional market over the forecast period. High product demand can mainly be attributed to growth of the textile industry in emerging economies such as China, India, Vietnam, and Taiwan. Demand in this region is anticipated to escalate further owing to rising product consumption in aluminum, soaps and detergents, organic chemicals, and more.

Asia Pacific is expected to account for over 55.0% of the market by 2024. This is likely due to increasing production of and demand for caustic soda in the China market. Over 40% of the global production, as well as demand, comes from China on account of the high growth of various industries. 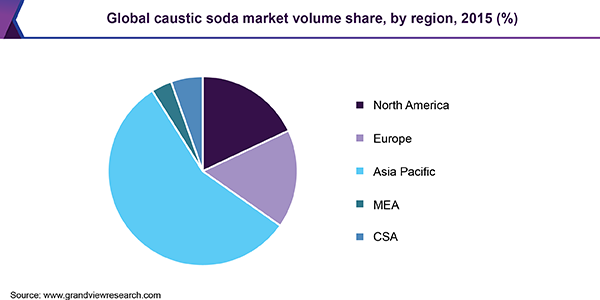 North America is anticipated to witness steady growth from 2015 to 2024, exhibiting a CAGR of 3.2%. Higher demand from textile as well as soap and detergents applications is expected to fuel the regional market over the forecast period. As of 2018, demand of caustic soda went from balanced to moderately high, along with a slight surge in price-points. Conversely, high temperature fluctuations in the U.S. and other North America countries have led to disruption in production volumes, longer formulation time, and reduced operating rates of few plants. This could prove to be a challenge to market growth.

Caustic soda production is an energy intensive process. This leads to high manufacturing cost, which poses a challenge to market growth. Price fluctuation is another challenge that market players will face during the forecast period. Caustic soda is likely to be the only commodity chemical that witnesses a price fluctuation in the range of 5 to 15 % in the spot market.

Increasing R&D activities for development of new products and production processes are expected to provide new opportunities to market players. Major stakeholders in the market will focus on capacity expansion and joint ventures in emerging markets such as India and China to cater to the augmented demand.

In terms of process innovation, among the few established industry participants, Solvay has been leading the market in major geographies. The product’s demand and supply also largely depends on the location of the manufacturing facility, and thereby, subsequent transportation modes and costs need to be taken into consideration. Several key players in the market are working on establishing brand value to promote long-term consumer relationships with regionally launched products.