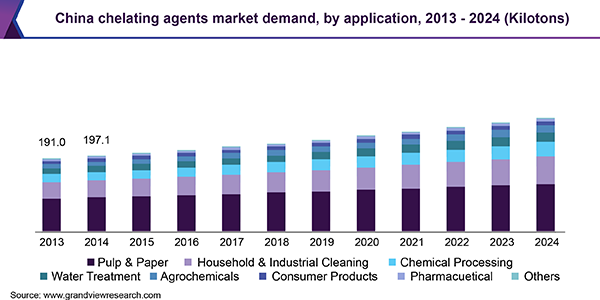 These agents are mainly employed in various mainstream industries including textiles, pulp and paper, and cleaning and detergents. Rising health awareness and increasing concerns over common diseases among consumers are expected to augment the product demand in these industries, thereby resulting in the significant growth of the market.

Chelating agents are majorly used in the pulp and paper industry as they help in providing the desired level of brightness to the paper when applied with hydrosulfite and hydrogen peroxide bleaches. Their ability to form more than two separate coordinate bonds in between multiple bonds makes them applicable as nutritional supplements, contrast agents, and fertilizers.

Continuous exposure to non-biodegradable chelating agents including EDTA has hazardous effects on the environment, which, in turn, might hamper the market growth over the forecast period. Adverse effects of non-biodegradable chelating agents called in for promoting the usage of bio-degradable and advanced chemicals, particularly in Asia Pacific, which will prove to be an excellent opportunity for the market.

The pulp and paper application segment dominated the market in 2015 and accounted for over 35.0% share in terms of volume as well as revenue. Increasing demand for graphic and tissue papers is expected to augment the segment growth. Moreover, these chemicals play a crucial part and are considered to be an integral element of the pulp and paper making process.

Chelating agents not only enhance the effectiveness of hydrosulfite and hydrogen peroxide bleaches but also minimize the bleaching costs and downtime. Addition of chelating agents to the pulp processing and papermaking process removes the scales, thus improving the overall efficiency.

Household and industrial cleaning was the second largest application segment. These chemicals are used for the treatment of hard water, thus making it available for drinking and commercial purposes. Textile and food and beverages are other significant application segments expected to witness significant growth over the next few years, owing to rising health concerns and improving living standards among the population.

Aminopolycarboxylate (ACPA) and sodium gluconate together dominated the global industry, accounting for a 75.3% share of the overall volume in 2015. Increasing availability of biodegradable APCA products is expected to boost the growth of the ACPA segment over the forecast period.

Increasing usage of APCAs in household and home care applications, particularly for water treatment and removal of hard water, is expected to drive its demand. Rising awareness among consumers regarding drinking water, coupled with other significant health concerns, is anticipated to augment the demand for ACPAs in the next few years. 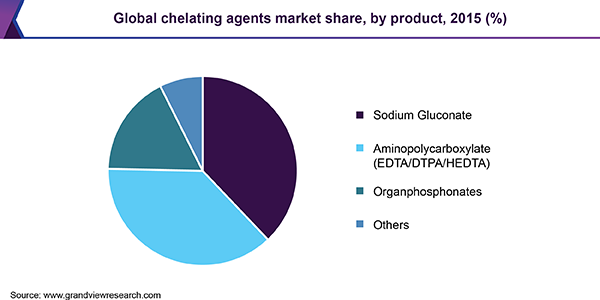 Moreover, they are employed in removing salts and metal oxides from fabrics and hence are widely used in the textile industry. Chemicals including NTA, PDTA, DTPA, and EDTA are the common ACPAs employed in various applications, thus improving the shelf-life of the end products and reducing the maintenance costs.

Demand for sodium gluconate exceeded 385.0-kilo tons in 2015 and is expected to witness above-average growth owing to its extensive use in detergents, personal care products, and industrial applications. The chelate is obtained from natural sources and is considered safe for use in a wide range of cosmetics and bath soaps. Growing demand for these products is expected to bolster growth over the forecast period. Moreover, the substance exhibits excellent chelating properties, making it desirable for use in applications that utilize or come in contact with hard water.

Asia Pacific was the largest regional chelating agents market in 2015, accounting for 39.5% share of the global volume. This trend is expected to continue over the projected period owing to continuous innovations and developments in the textile as well as pulp and paper industries of the region.

Emerging economies of the region including India, China, Japan, Indonesia, and South Korea are expected to show significant improvements in the water treatment, cleaning, and detergent application sectors owing to growing population, coupled with increasing awareness.

Increased demand from the food and beverage industry of the region is also projected to augment the market demand over the forecast period. Rapid urbanization, continuous industrialization, and surging demand for clean and treated water as well as processed food are some of the other key factors driving the market in Asia Pacific.

Few key strategies adopted by the major companies include capacity expansion and mergers and acquisitions. For instance, in 2016, BASF opened a new chelating agents plant at Ludwigshafen to increase its production capacity and acquire a leading market position.