The global chemoinformatics market was valued at USD4.43 Billion in 2015. Some major drivers include the surging prevalence of chronic diseases and the corresponding need to invent novel drugs, growing significance of validating the diverse number of potential drug candidates developed by combinatorial chemical methods, rising emphasis on the effective management of data generated during molecular and atomic reactions, and the increasing number of investments driving the R&D efforts.

One of the critical success factors contributing to the growth of the chemoinformatics market is the advances in computer technology. Positive influences include the surging prevalence of chronic diseases and the corresponding need to invent novel drugs, growing significance of validating the diverse number of potential drug candidates developed by combinatorial chemical methods, rising emphasis on the effective management of data generated during molecular and atomic reactions, and the increasing number of investments driving the R&D efforts. 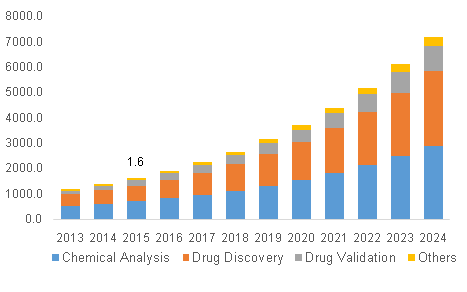 The growing awareness levels related to personalized medicine driving the demand for effective medication coupled with the unsustainable burden of chronic diseases serves as an impelling factor for new drug development, which impacts positively the growth of the chemoinformatics market. These techniques find a vast array of applications in the various stages of drug designing. It has revolutionized the drug discovery process in identifying effective lead targets with estimated success rates thereby assuring a higher probability of success in lowering the high drug attrition rates. Furthermore, With the growing R&D intensity, the sector is further reinforced owing to the technological innovation inputs.

Due to the massive volume of data generated in synthesizing new, potential drug candidates through the combinatorial chemistry approach, efficient data storage and retrieval methods are imperative. The effective management of copious amounts of data is achievable with the help of pertinent tools. As a result, the field has gained significant momentum in research institutions, pharmaceutical companies, biotechnology industry, research laboratories, and academic institutions.

The key applications of chemoinformatics are in the areas of drug discovery, chemical analysis, drug validation, and in few other areas like paper and pulp industry, textile industry, biochemistry, botany, and in the prediction of drug toxicity.

In 2015, the chemical analysis segment accounted for a majority of the revenue. Additionally, the drug discovery category is expected to witness a lucrative CAGR of over 17% during the forecast period and is expected to become the largest application by 2024. The key factors contributing to the segment’s high growth include the increasing investments in R&D and the relatively low success rate of the potential leads as drug molecules; these factors in conjunction with each other are expected to boost the usage of these platforms.

The field plays a prominent role in developing novel medicines due to the wide applicability of its tools in the various areas of drug development including target identification, lead optimization, drug validation, ADMET predictions, determining structure-quantitative relationships, molecular modeling, and 3D structure development. It has been a great breakthrough in the drug development industry as many complex molecular and atomic level problems can be solved with the in-silico approach. The automation based rapid screening of a large number of compounds at a go with the development of high throughput screening techniques has spurred growth. Applications in the drug discovery process is expected to hold a major share as a consequence of the rise in heavy investments being made in the R&D sector and the relatively low success rate of the potential leads as drug molecules.

North America was the largest regional space in 2015, owing to the high R&D intensity and the incorporation of highly innovative technologies, increasing prevalence of chronic disorders, and the presence of some of the major players in the drug manufacturing industry. In 2015, the North America chemoinformatics market was valued at over 1.6 billion. Increasing patient awareness about healthcare services and growing demand for personalized medicine will boost growth. Moreover, North America has a strong foothold in the global pharmaceuticals industry as well as a strong R&D presence.

The Asia Pacific market is expected to witness lucrative growth of over 18%in the coming few years. Some growing economies in the Asia Pacific region, such as India, China, and Singapore, are attracting large multinational players to conduct research activities owing to the cheap manufacturing and labor costs and the presence of a favorable manufacturing environment. In addition, the rapid increase in the research efforts undertaken in the fast-emerging economies of the Asia Pacific region is expected to further reinforce growth.