The global clear aligners market size was valued at USD 2.6 billion in 2020 and is expected to expand at a compound annual growth rate (CAGR) of 27.3% from 2021 to 2028. Clear aligners are a series of tight-fitting custom-made mouthpieces or orthodontic systems that are useful in correcting misaligned or crooked teeth. Clear Aligners are virtually discreet and removable alternative to braces designed around patient’s convenience and flexibility. Factors such as the growing patient population suffering from malocclusions, rising technological advancements pertaining to dental treatment, and growing demand for customized clear aligners are driving the overall market growth. 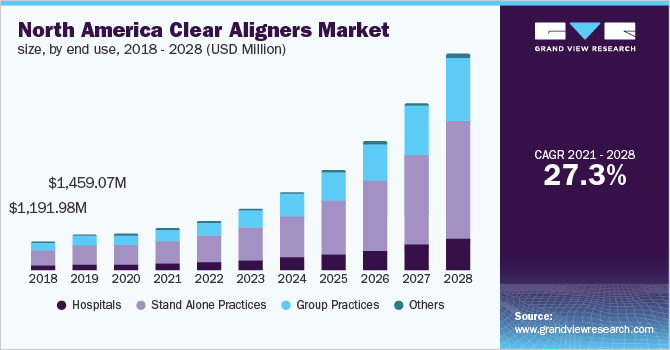 COVID-19 is a global crisis having a considerable effect on people’s life and economy, with nearly 186 million infected and around 4.0 million lives being lost globally. According to American Dental Association, U.S. dental care spending is expected to decline by 38% in 2020 and around 20% in 2021. However, the association also predicts spending projections to be more optimistic in the future as dental practices are opening and patient volume is increasing faster than anticipated. In the U.S., 27 states allowed dental offices to open for elective care by May 2020 and by June around 48 states opened for elective dental care and, as a result, employment at dental offices has seen a rebound.

According to the WHO, malocclusion is the third most prevalent dental disease after dental caries and periodontal disease globally. WHO also states that oral diseases with public health importance should be under periodic surveillance for sufficient planning and treatment and they also included malocclusion in Handicapping Dentofacial Anomaly. Currently, the distribution and severity of oral diseases like malocclusions vary among different parts of the world and within the same country or region. Malocclusion is a condition wherein the teeth are misaligned and crooked which can later lead to severe oral health complications such as hard and soft tissue trauma. Class I (74.7%) and Class II (19.56%) malocclusions are most prevalent among the global population. According to the SMR Journal of Research, The prevalence of malocclusion varies in different countries, ranging from 88.1% in Colombia, 62.4% in Saudi Arabia, 20-35% in the United States, and 20-43% in India. The newly introduced clear aligners are used by many orthodontists to correct overbites, crooked teeth, and various other oral flaws. Previously the clear aligner systems were only used to treat acute problems but with the advent of advancement, they are now proved to treat more severe issues. Class I and II cases of misalignment can now be treated by clear aligner systems. Hence, these systems are being widely accepted by many patients.

Invisible aligners developed through virtual digital models, computer-aided design (CAD-CAM), and thermoformed plastic materials like copolyester or polycarbonate plastic. Most of the clear aligners are capable of incremental tooth movement of 0.25-3mm, over a period of 2 weeks for 20 to 22 hours a day. Inconvenience caused by the metal and ceramic braces and the long-term gum sensitivity they can cause has increased the adoption of clear aligners by the Patients and dentists. The Aligner is designed with the wearer’s comfort and is flexible. According to Dental Tribune, clear aligner technology has quickly become an increasingly popular alternative to fixed appliances for tooth straightening, since it is an aesthetically appealing and comfortable choice. Invisalign is the largest producer of clear aligners, and other brands include Clear Correct, Inman Aligner, and Smart Moves. However, factors like high cost of clear aligners, less number of dentists in emerging areas, and limited insurance coverage on orthodontic treatments are likely to hinder market growth.

The teenage segment dominated the market and held the largest revenue share of 73.0% in 2020. The segment is expected to reciprocate the highest CAGR over the forecast period. Based on age, the market is segmented into adults and teenagers. Dental conditions like malocclusion are widely prevalent amongst the population and apart from affecting the quality of life, it can also lead to problems such as impaired dentofacial aesthetics, disturbances of oral function, such as mastication, swallowing and speech and greater susceptibility to trauma and periodontal disease. Nowadays, acceptable aesthetic appearance including dental appearance plays a vital role in society. An increasing concern for dental appearance is seen more among the adolescent population. Aligner therapy is one of the fastest-growing areas in orthodontics, driven significantly by patients who regard it as a more comfortable, convenient, and discreet alternative to fixed appliances.

The FDA-approved Invisalign clear aligners developed by Align Technology, have been used in the treatment of 5 million people as of 2018 and worldwide Invisalign shipments to teenagers were about 87.1 thousand cases as of 2018. As per NCBI, the prevalence of Class I and Class II malocclusions are highest among the population, the adoption of clear aligners that is effective in treating these conditions have gradually increased. This is because many teenagers prefer avoiding discomfort caused by the metal braces and also look aesthetically appealing. For these reasons, teenagers are highly opting for clear aligners to get treated for their dental conditions. To date, over 1.0 million teenagers have started orthodontic treatment with Invisalign clear aligners.

Standalone practitioners are readily adopting the clear aligner system and are equipped with advanced digital technologies, thus driving the segment. According to the American Dental Association (ADA), there are 10,658 orthodontists practicing in the U.S as of 2017 and approximately 795 of the orthodontist own or share ownership of a practice. Moreover, the group practices segment is expected to witness the highest CAGR over the forecast period as it helps in minimizing costs, and maximize their earning potential while adopting newer advanced technology.

North America dominated the clear aligners market and accounted for the largest revenue share of 57.5% in 2020. The region is expected to showcase a significant CAGR over the forecast period. This is attributed to increasing R&D investments and the local presence of global players and their efforts to obtain new patents. A survey conducted by the American Dental Association stated that 85.0% of individuals in the United States truly value dental health and consider oral health an essential aspect of overall care. There are four million people in the U.S wearing braces out of which 25% are adults and the advent of clear tray-style aligners has attracted the attention of many patients wanting to improve their smile but would prefer to avoid the metal-mouth look of braces Factors like increasing awareness regarding the recent development in dental hygiene, various convenient options available for treating teeth misalignment and surge in beauty standards have propelled people to opt for aligners, in turn, increasing market growth in the region. 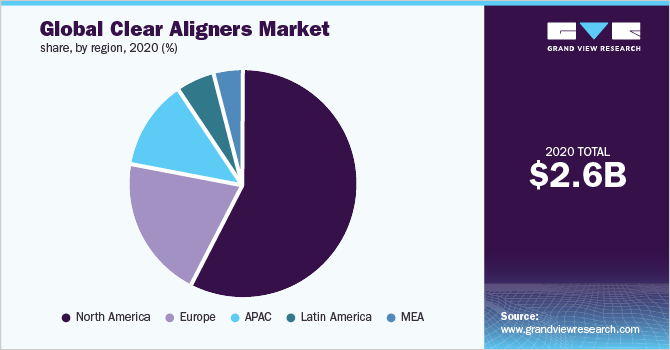 In APAC, the market is expected to witness the highest CAGR of 29.2% over the forecast period due to increasing demand for clear aligners in developing economies, namely India and China. The surge is also due to the aesthetic appeal of the aligner systems. In February 2016, Align Technology announced the launch of Invisalign systems that include Invisalign Full, Invisalign Teen, and Invisalign Lite clear aligners, in India targeting over 80 million urban population as they account for a considerable share of sales of premium oral care products in the country.

The market is highly competitive in nature. One of the key factors driving the competitiveness among market players is the rapid adoption of advanced digital technology like intraoral scans, digital tooth set-ups, 3D printers, and CAD/CAM appliances. Moreover, a prominent number of these players are rapidly opting for strategic expansions and collaborations for increasing their geographical presence and increasing sales volume in emerging and economically favorable regions. For instance, in September 2019, Align Technology formed collaboration with Zimmer Biomet Dental to leverage their extensive direct global sales force and network of dental clinicians and laboratories to help drive further penetration of Invisalign and provide access to clear aligners through the iTero platform. Some of the prominent players in the clear aligners market include:

This report forecasts revenue growth at global, regional, and country levels and provides an analysis of the latest industry trends in each of the sub-segments from 2016 to 2028. For the purpose of this study, Grand View Research has segmented the global clear aligners market report on the basis of age, end use, and region:

How big is the clear aligners market?

What is the clear aligners market growth?

Which segment accounted for the largest clear aligners market share?

b. North America dominated the clear aligners market with a share of 57.4% in 2020. This is attributable to rising healthcare awareness coupled with cloud-based technologies acceptance and constant research and development initiatives.

Who are the key players in the clear aligners market?

What are the factors driving the clear aligners market?

b. Key factors that are driving the clear aligners market growth include increasing medicare reimbursement for telehealth services, reducing emergency room visits and hospitalization rates, and technological innovation in communication technology across the world.