Global CHP installation market was valued at USD 6.25 billion in 2014. The shift in preference towards generating energy from single fuel by replacing conventional separate heat and power system (SHP) is expected to drive the market over the seven years. 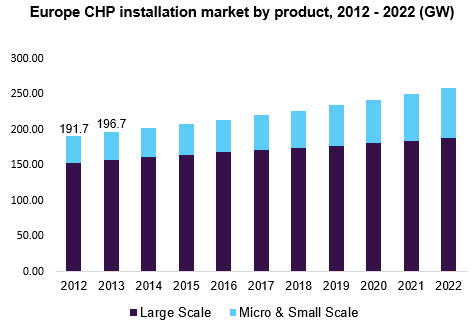 Stringent government regulation to curb CO2 gases into the environment is expected to drive demand over the forecast period. The 2008/EC directive by European Commission (EC) in the year 2004 was developed to promote cogeneration systems and reduce the greenhouse gases (GNG). Governments in various regions are also providing financial incentive schemes to promote CHP usage.

Abundant natural gas supply coupled with low pricing is expected to influence the market positively. Natural gas is widely used fuel for CHP systems as it is available abundantly in Russia, Qatar, Iran, and the U.S. Natural gas based systems are also cost-effective and are easy to install compared to other fuel systems.

Increasing energy prices has led power generation utilities to implement efficient ways of power generation while using less energy resources. In addition, awareness regaring energy efficiency and energy conservation measures are rising in developed as well as emerging countries. These factors are expected to majorly boost the market growth for CHP market in the forecast period.

Increasing energy demand in industrial and commercial sector is expected to fuel the demand. It is a clean approach to generate electricity and thermal energy from single fuel cell. This process can reduce the dependency of purchasing electricity from local utility and then burning fuel in a boiler or on-site furnace.

High initial investment cost is expected to hinder market growth. Due to their complex technology, these systems are costly to install for small & medium size institutions and prove beneficial to large industries. Increasing application scope in residential and commercial sectors is expected to provide opportunities for industry participant’s growth over the forecast period.

Large scale and micro & small scale are two basic prototypes of CHP systems. Large scale prototypes accounted for over USD 6 billion in 2014. This product finds its major application in industrial and commercial sectors.

Increasing energy demand from large scale industries such as refining, chemical, pharmaceuticals, cement, textile, glass, pulp, paper, and sugar is expected to drive the demand for large scale based systems.

Micro & small scale systems accounted for over 15% in 2014 and are expected to witness significant growth rates of over 8% from 2015 to 2022. Increase in clean energy demand from residential sectors is expected to drive market growth.

Natural gas based CHP systems amounted for over USD 5 billion in 2014. Natural gas is a clean source of energy available and hence it is widely preferred in these systems to generate energy.

Biomass are renewable & environmental friendly fuels for CHP installations. They are particularly used as fuels for small & micro based CHP systems and expected to witness high growth rates as they help in curbing harmful environmental gases and achieve government targets of using renewable energy.

Combined cycle system was the dominant technology in 2014 with a market valuation of over 6 billion. These systems are used for application where energy requirement is high particularly for industrial sectors such as chemicals, refining, pulp, paper, sugar, cement, and pharmaceuticals.

Steam turbine based technology accounted for over 30% of the total volume in 2014 and is expected to exhibit moderate growth rates over the forecast period.

Reciprocating engine based technology amounted for over USD 750 million in 2014 and is expected to witness higher growth rates with an estimated CAGR of over 7% from 2015 to 2022. Other technologies used in the market include combustion/gas turbine, waste heat recovery, fuel cell and microturbine.

Industrial sector was the largest application segment for these systems with a market valuation of over USD 6 billion in 2014. These systems are widely used in industries such as petrochemicals and pharmaceuticals. Industrial CHP systems generate electricity and also capture heat that is otherwise treated as waste.

Industrial systems also have benefited by having this system setup of generating thermal energy which can be used a utility for heating or it can be converted to electricity. This thermal energy can also be converted to cooling when it is connected to an adsorption chiller and thus taking advantage of low-cost fuels. 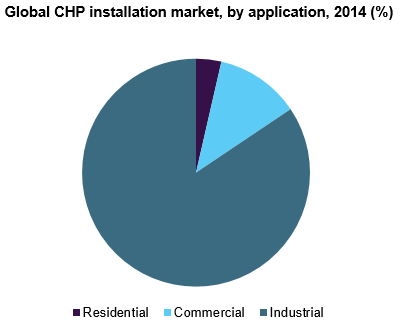 Increasing lighting and space heating & cooling demand in institutions such as hospitals and universities are expected to drive market growth for commercial sector. These systems are also utilized in retail and office space to meet energy requirements.

Europe was the leading regional market for CHP systems demand with a market valuation of over USD 4 billion in 2014. Stringent environment regulation to curb pollution levels is expected to drive this regions demand. North America is expected to witness moderate growth rates of a CAGR of over 3.5% from 2015 to 2022.

Asia Pacific accounted for over 25% in 2014 and is expected to witness significant growth rates with an estimated CAGR of over 4.5% from 2015 to 2022. Presence of large scale manufactures in Asia Pacific countries of China, India, Japan and South Korea is expected to drive this region’s demand.

Governments in major APAC countries such as China and India are committing towards increasing share of cleaner energy mix to reduce the existing high emission levels. Moreover, government in some of the APAC countries are also supporting CHP installations through policies and R&D initiatives. This factor will lead to grow the market in APAC region in future.

Companies are focusing towards entering in strategic partnership for combined research & development efforts to launch better products in the market. For instance, Toshiba and General Electric (GE) in 2013 entered in strategic alliance to expand their joint work in combined cycle power generation and advanced steam turbine technology.

This report forecasts revenue and volume growth at global, regional & country levels and provides an analysis on the industry trends in each of the sub-segments from 2014 to 2025. For this study, Grand View Research has segmented the global CHP installation market on the basis of product, fuel, technology, application, and region.