The global cooling towers market size was valued at USD 3.53 billion in 2020 and is expected to expand at a compound annual growth rate (CAGR) of 4.1% from 2021 to 2028. The growing demand for energy-efficient cooling systems in commercial and industrial applications is anticipated to drive the growth of the market over the forecast period. Cooling towers offer a cost-effective method for cooling large commercial spaces and process cooling applications in various industries and industry verticals, such as oil and gas, chemicals, and food processing. Cooling towers are also deployed on a large scale in thermoelectric power plants to remove the excess heat. Increasing electricity consumption is leading to the construction of new power plants, which is expected to fuel market growth. 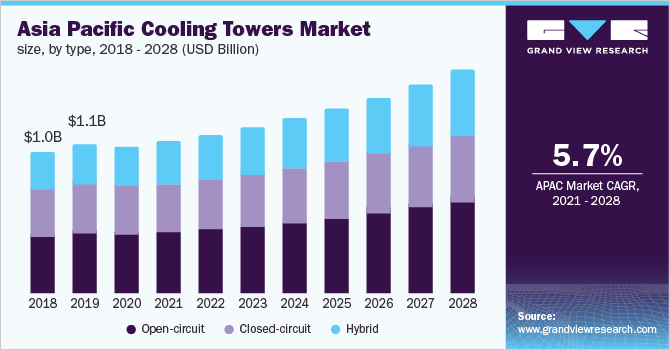 The outbreak of the COVID-19 pandemic and the subsequent supply chain disruptions and temporary suspension of production across various industries and industry verticals took a severe toll on the market. Several end-use industries and industry verticals that require cooling towers had to confront declines in the wake of the outbreak of the pandemic. For instance, the production of chemicals plummeted by 3.6%, while the production in the oil and gas industry declined by 6.4% in 2020. The HVAC and the power generation industries also had to confront revenue declines in 2020, thereby affecting the adoption of cooling towers. Nevertheless, the market is poised for a gradual recovery in 2021 as manufacturing units reopen and manufacturing activities resume.

On the other hand, the hybrid segment is expected to register a CAGR exceeding 5% over the forecast period. Hybrid cooling towers reduce the steam drift and play a vital role in plume abatement. These towers also operate effectively in varied climatic conditions. Hence, the adoption of hybrid cooling towers is expected to gain traction over the forecast period.

The power generation segment accounted for the largest market share of over 20% in 2020. New power plants are being established all over the world to cater to the rising demand for power in line with rapid industrialization. Cooling towers play a vital role in removing the excess heat from power plants, and hence the demand for cooling towers is also expected to gain traction in line with the continued establishment of new power plants. The HVAC segment is anticipated to emerge as the fastest-growing segment over the forecast period owing to the increase in the construction of residential and commercial establishments.

Cooling towers also play a vital role in providing optimal cooling for industrial facilities. As such, incumbents of heavy industries, including chemicals, pulp and paper, cement, and oil and gas, are aggressively adopting cooling towers. However, most of the incumbents of these industries had to confront a dwindling demand in 2020 owing to the outbreak of the COVID-19 pandemic, thereby leading to a negative impact on the market. Although the market is poised for a gradual recovery in 2021, it would be able to attain its pre-pandemic growth levels only over the next three years.

The high-density polyethylene (HDPE) segment is expected to register the highest CAGR of more than 5% over the forecast period. HDPE cooling towers cost less and offer high resistance to corrosion. These towers are lighter in weight and hence easy to transport and install. They are also impervious to chloride attacks and provide better protection against corrosion and leakages. 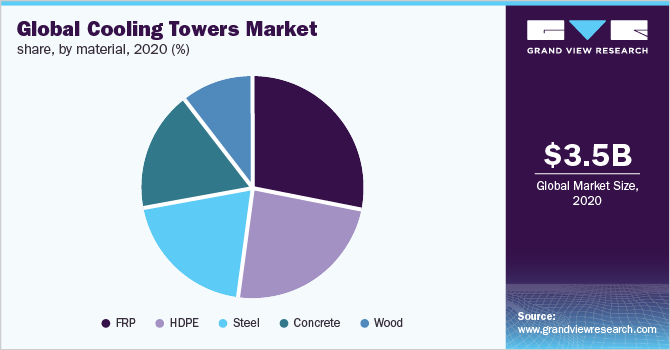 The fiber-reinforced plastic (FRP) segment accounted for the largest market share in 2020. FRP cooling towers offer various benefits, such as high corrosion resistance and the ability to sustain varying environmental conditions. However, the high costs associated with FRP cooling towers are expected to hamper their adoption. The steel segment also accounted for a substantial market share in 2020. Steel cooling towers are made up of galvanized and stainless steel and hence offer high structural strength. These towers also offer good conductivity and enable effective cooling, and are hence ideal for large facilities.

The growth of the Europe market for the cooling tower can be attributed to the growing number of industrial facilities being established by the incumbents of various heavy industries and the stringent regulations being drafted by the governments in the region to reduce carbon emissions. On the other hand, the strong presence of oil and gas companies in the Middle East and Africa is anticipated to drive the demand for cooling towers in the region. Furthermore, several industries are setting up distribution centers and production facilities in emerging countries such as Brazil, Mexico, Argentina, and others, to serve the unattended market. This is expected to fuel the growth of cooling towers across Latin America.

The market is characterized by strong competition owing to the presence of both established players and relatively smaller vendors offering a range of products. The market can also be described as a moderately fragmented market owing to the presence of key players, such as SPX Corporation; EVAPCO, Inc.; S.A. Hamon; Paharpur Cooling Towers; Babcock & Wilcox Enterprises, Inc.; Enexio; and Baltimore Aircoil Company.

Market players are pursuing various inorganic strategies-, such as mergers and acquisitions and joint ventures, to sustain in the intense competition. Market players are also developing and introducing new products to maintain a competitive edge in the market. For instance, SPX Cooling Technologies, Inc. introduced the Marley BasinGard Filter in February 2020. The filter is designed to capture pipe rust, debris, and mineral scale and help in maintaining the hot water basin flow of the cooling tower. The filter would be available for both existing and new, factory-assembled, crossflow cooling towers. Some of the prominent players operating in the global cooling towers market are:

The report forecasts revenue growth at global, regional, and country levels and provides an analysis of the latest industry trends and opportunities in each of the sub-segments from 2018 to 2028. For this study, Grand View Research has segmented the global cooling tower market report based on type, material, application, and region:

How big is the cooling towers market?

What is the cooling towers market growth?

Which segment accounted for the largest cooling towers market share?

b. The Asia Pacific dominated the cooling towers market with a share of 29.5% in 2020. This is attributable to the increasing number of manufacturing facilities and the growing focus on nuclear power plant construction.

Who are the key companies/players in the cooling towers market?

What are the factors driving the cooling towers market?

b. Key factors that are driving the cooling towers market growth include rising construction activities and the growing need for energy efficiency across several application fields.