The global data center generators market size was valued at USD 6.7 billion in 2019 and is expected to grow at a compound annual growth rate (CAGR) of 6.5% from 2020 to 2027. Generators are the backup power supply source for the data centers during a power interruption. Entire power cut off from a data center might require a total restart for the system, this might lead to start-up issues, system downtime, and loss of current/ongoing information. Thus, to avoid such anomalies and errors, data centers are always backed with a backup power supply through the generators. 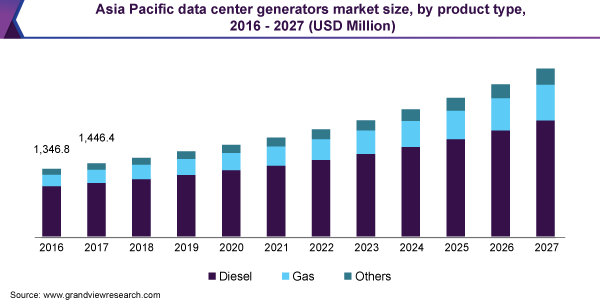 A key driving factor for the market is that these generators do not require an existing power supply to function. In addition, major manufacturers are developing generators with customized capacity due to changing customer requirements. Such systems are equipped with a feature to scale up and down as per the power required by the data center. This flexibility is also expected to escalate the demand, thereby augmenting the market growth.

Several colocation service providers have increased the production of data centers owing to the rising demand for edge data centers across the globe. For instance, in 2019, Google invested USD 3.3 billion to expand its data center presence in Europe. Moreover, the growing construction of hyperscale facilities and increasing adoption of Diesel Rotary Uninterruptible Power Supply (DRUPS) is expected to boost the market.

However, increasing power costs is projected to have a negative impact on the market. The rising trend of using fuel cells as a power backup due to the high costs of generators might also cause hindrance in the market growth. For Instance, in 2019, the Adani Group announced an investment of USD 9.8 billion to set up solar-powered data parks in India.

Data centers are mission-critical infrastructures that handle and process a large volume of data across multiple industries, and hence data centers form significant contributors to the world economy. However, reliable power backup to prevent any data loss during power outages is of prime importance for data center facilities. Generators provide a secure and cost-effective solution to provide backup for data centers and avoid downtimes incurred in restarting the entire system. Generators do not require any external power supply to operate and can suffice to the massive electrical power demands of a data center, resulting in increased adoption for power backup.
Data center generator manufacturers are focused on equipping their products with technologically advanced features to cater to the varying demands of data center facilities. Moreover, companies like Cummins, Inc., and Himoinsa have introduced features like remote monitoring to the generator sets. Thus, the data center operator can observe the load levels, power system status, and alternator data while also controlling it remotely. Such features result in low maintenance costs and higher operating efficiencies for the data center facilities. All these factors are expected to spur the adoption of DC generators across the globe.

The integration of battery technologies such as fuel cells and Li-ion batteries has led to the emergence of fuel cell power systems, which is expected to hinder market growth. The fuel-powered generators used in data center facilities produce nitrogen oxide, carbon dioxide, particulate matter, and other dangerous exhausts released into the atmosphere. Thus, while installing such generators, data centers need to consider various government regulations pertaining to environmental sustainability. Moreover, for installing the generators, ample space is required along with large, on-site fuel tanks. A dedicated UPS is also required for the smooth functioning of the generators. Owing to the aforementioned factors, data center companies are looking at newer technology that can replace fuel powered generators.

Product type segment is categorized into diesel, gas, and others. The diesel product type held the largest market share in 2019. The segment will expand further during the forecast period due to the high adoption of these products as they are coupled with flywheel UPS topology and battery to provide backup power supply.

The gas product type is projected to register the fastest CAGR of 8.1% during the forecast period. Gas product type is highly preferred by the customers owing to long-term usage. Although the initial investment cost associated with gas-based systems is high, they are eco-friendly and offer long-term cost benefits.

<1MW capacity segment led the market in 2019 and is estimated to retain its leading position throughout the forecast period. This growth is attributable to the extensive usage of edge data centers across the globe. Moreover, wide usage of on-premise data centers in developing countries, which generally require generators of less than 500 kW capacity, will also support the segment growth.

The extensive presence of tier I and II data centers in developing regions like Asia Pacific and Latin America has contributed to the growth of this segment. The 1 MW - 2MW capacity segment is likely to witness steady growth.

The adoption of this capacity is normally along with N+1 configuration redundant systems that are installed in large data centers. These systems are designed for providing 48+ hours of runtime. Growing investments in the construction of mega data centers and back up capabilities of long hours are the factors anticipated to drive the market growth of this segment.

The tier standards segment is divided into tier I & II, III, and IV. The tier standards are based on the type of site infrastructure where the generators are used. In terms of revenue, tier I & II is the dominant segment. Tier I & II provide improved UPS to filter power spiked, IT systems, and momentary outages. Moreover, the tier I & II type also have dedicated cooling equipment and offer on-site production of power. This provides increased margin of safety against the IT systems, thereby resulting in market growth. 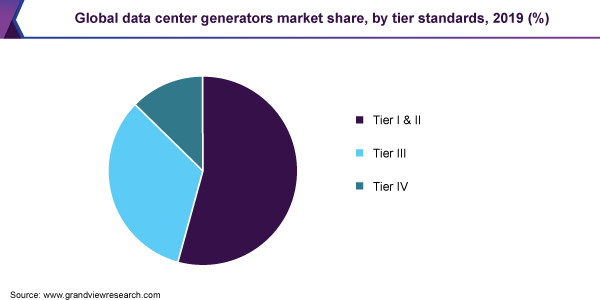 Tier IV is expected to witness the fastest CAGR over the forecast period. The introduction of fault tolerance technology in the infrastructure topology is expected to bolster its adoption in the coming years. Tier IV adoption is observed to have a significant growth rate in Europe, as 25% of all tier IV verified data centers are situated in Luxembourg.

North America is a major shareholder in the market. The presence of major companies, such as Cummins, Inc.; Caterpillar Inc.; and Generac Holdings Inc., has positively affected the growth of the regional market. Factors, such as advanced technology development and awareness about the same, are also expected to positively impact the market.

The high revenue share of North America can be attributed to the aggressive investments in hyperscale projects. The U.S. happens to be a developed economy and already boasts an established, sophisticated network infrastructure. It is also home to major cloud service providers, such as Amazon.com, Google, Inc., and Facebook. These companies are investing in the construction of mega facilities for additional data storage and processing capabilities, thereby opening opportunities for market growth.
Asia Pacific is projected to be the fastest-growing region at a CAGR of 9.0% over the forecast period. Investments by market leaders in developing countries like China and India are expected to drive the regional market. For instance, Atlas Copco is focused on generating its revenue from Asia Pacific region. According to the industry experts, in 2018, Asia Pacific contributed 35% of the company’s total revenue.

Countries like India and China generate a large volume of data owing to rising internet usage and high smartphone penetration. There has been an increase in investments and the construction of hyper-scale data centers across the region. For instance, In 2018, Facebook announced an investment of USD 1.4 billion for the development of a hyper-scale data center in Singapore. Similarly, in 2019, Alibaba Cloud, a subsidiary of Alibaba Group, announced the opening of its second data center in Indonesia. Thus, the increasing number of data center constructions coupled with a high rate of power outages in the Asia Pacific is expected to increase the adoption of generators, thereby contributing to market growth.

Latin America has considerable growth opportunities in the forecast period as several key companies are focusing on M&A to expand and mark their presence in the region. For instance, in June 2018, Generac Power Systems announced the acquisition of Selmec Equipos Industriales, S.A. de C.V. to expand its business of industrial generators in Latin America
.

In a moderately consolidated market, all established companies are trying to sustain their market position. Initiatives and strategies adopted include striking strategic partnerships, investments, and mergers and acquisitions. For instance, in July 2018, Cummins Inc. announced the acquisition of Efficient Drivetrains, Inc., which is engaged in designing and manufacturing both hybrid and fully electric power products. The acquisition was made to broaden the former company’s electrification expertise and products.

Other strategies undertaken by companies include the development of new products and service lines. For instance, in March 2019, Caterpillar announced the launch of Cat G3512 natural gas generator. The generator is designed for performing maximum operations on low-pressure energy supply. This newly launched generator is suitable for data centers, schools, retail complexes, universities, government offices, and research facilities. Some of the prominent players in the data center generators market include:

This report forecasts revenue growth at global, regional, and country levels and provides an analysis of the latest industry trends in each of the sub-segments from 2016 to 2027. For the purpose of this report, Grand View Research has segmented the global data center generators market report based on product type, capacity, tier standards, and region:

What is the data center generators market growth?

b. North America region dominated the data center generators market with a share of 37.8% in 2019. This is attributable to presence of large number of data center service providers and upcoming hyperscale data center constructions in the region.

Who are the key players in data center generators market?

What are the factors driving the data center generators market?

b. Key factors that are driving the market growth include increasing need for backup power supply in data centers, and rising number of data center constructions worldwide.

How big is the data center generators market?