The global diethylene glycol monobutyl ether market size was estimated at USD 178.4 million in 2018 and is expected to witness a CAGR of 3.9% from 2019 to 2025. Increasing consumption of the product as a cleaning agent and in the formulation of paints and coatings is expected to drive the market over the forecast period. 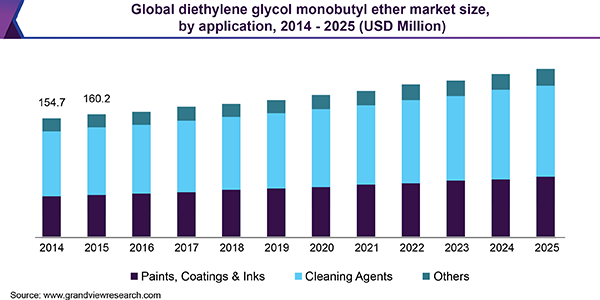 Diethylene glycol monobutyl ether is one of the broadly utilized coalescents in formulating latex paints for architectural applications. Increased construction spending in emerging countries is expected to trigger the demand for paints and coatings in the building and construction sector, which in turn is expected to augment market growth.

Diethylene glycol monobutyl ether is widely used as a solvent in cleaners and detergents, dyes, ink, and paint industries. According to the European Union Risk Assessment Report, in Europe, the product is used as a cleaning agent and in paint and surface coatings. In France, its use in the cosmetics industry is permissible, wherein it is used as a solvent in hair dyes with a maximum concentration of 9%. Moreover, various companies including Eastman Chemical Company have been granted permission under the Federal Insecticide, Fungicide, and Rodenticide Act to use diethylene glycol monobutyl ether without limitation for food-use and non-food use pesticide products.

The textile industry is a rapidly-growing market backed by constant technological innovations such as the development of smart textiles, the introduction of geotextiles, antimicrobial medical textiles, and waterproof breathable textiles. The demand for improved appearance of textiles has paved way for new dyeing techniques and unique formulations, globally. Diethylene glycol monobutyl ether is used as a wetting-out solution in the textile industry. In the textile dyeing application, DEG monobutyl ether promotes rapid and uniform penetration of dyes.

Diethylene glycol monobutyl ether does not cause any severe human health hazard and can be recycled. Therefore, it is not subjected to any stringent waste disposal regulations. Also, safety standards associated with transportation and storage of the product are lenient.

Diethylene glycol monobutyl ether is one of the broadly utilized coalescents in formulating latex paints and paints for architectural applications. Its demand in the paints, coatings, and inks segment accounted for 36.3% of global market revenue in 2018. Latex paints dominate the paint industry followed by oil-based paints. Since latex paints are water-based formulations, they dry faster compared to their counterparts, thereby reducing the time of application for a second coat. These paints are therefore broadly used in indoor painting applications.

DEG monobutyl ethers are used to formulate several industrial multi-purpose cleaners. In manufacturing facilities, proper cleaning of the equipment and its surrounding space is critical to ensure proper and uninterrupted functioning of the machines. Cleaning of the equipment includes degreasing, removal of accumulated dirt and dust, and disinfecting the surrounding areas. To maintain and preserve workplace cleanliness and hygiene, manufacturers working in the cleaning products formulation space have developed multiple surfactants, chelating agents, solvents, pH regulators, and solubilizers, wherein diethylene glycol monobutyl ethers are used in formulations. This is projected to drive demand for diethylene glycol monobutyl ether in cleaning agents with a CAGR of 3.5%, in terms of volume, over the forecast period.

The product is used in lacquers, stamp-pads, dopes, and printing inks, wherein it is required to have an extremely low evaporation rate. It is used in high-bake enamels to provide characteristics such as desirable flow and glossiness. In printing box-boards and other allied materials, it is used as a dye solvent to enable quick and uniform penetration of ink. It is used as a solvent for felt tip pens and ballpoint pen inks, as well as in textile printing and dyeing. Furthermore, it is also used as a diluent in hydraulic brake fluids and as a stabilizer and deactivator for formulating agricultural pesticides. The wide application scope of the product is anticipated to foster the consumption of the product over the forthcoming period.

North America market for diethylene glycol monobutyl ether is majorly driven by the product’s use in pharmaceuticals, detergents, and cleaning agents. The region recorded the highest consumption of industrial and institutional cleaners in 2017, followed by China. This can be attributed to the rising concerns related to sanitation in both the commercial and residential sectors. The aforementioned factors are expected to cumulatively augment the consumption of diethylene glycol monobutyl ether in the region with a CAGR of 3.3% in terms of revenue over the forecast period. 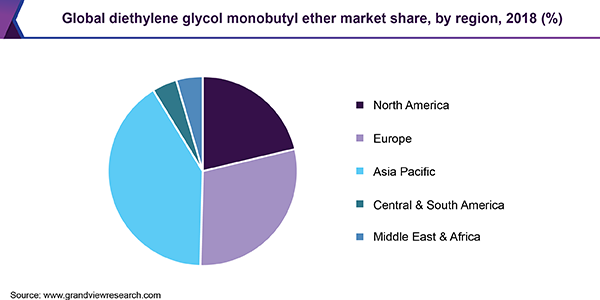 The Asia Pacific is recognized as one of the largest markets for paints and coatings, wherein the key players in the industry are seeking stable growth through consolidation. Rising population, rapid infrastructural development, growing middle-class and upper-middle-class population, and widespread urbanization has cumulatively led to significant consumption of various paints and coatings for individualized living spaces and public infrastructure development. The paint and coatings application accounted for a revenue share of 37.1% in the Asia Pacific market for diethylene glycol monobutyl ether in 2018.

In Central and South America, Brazil is the largest consumer of diethylene glycol monobutyl ether and accounts for over 60% of the region’s demand in paints and coatings application. After Brazil, Argentina and Colombia are observed to be substantially large consumers of paints and coatings, which is driven by the rising demand for architectural paints in these countries.

Key industry participants such as Eastman Chemical, TCI Chemicals, and India Glycols have been investing heavily in research to formulate products for expanded applications in niche applications, particularly cosmetics. Other notable players in the DEGBE  market include Advance Petrochemicals Ltd., The Dow Chemical Company, Petronas Chemicals, and Solvents.

The Asia Pacific is the largest producer of the product with the presence of players such as Advance Petrochemicals Limited, India Glycols, Petronas Chemicals, and Hannong Chemicals. Volatility in crude oil prices has been impacting the overall ethylene oxide and derivatives industry including DEG monobutyl ethers, resulting in fluctuation of operations and product supply. This is one of the key challenges being faced by market players.

This report forecasts revenue growth at global, regional, and country-level and provides an analysis of the latest industry trends in each of the sub-segments from 2014 to 2025. For this study, Grand View Research has segmented the global diethylene glycol monobutyl ether market report on the basis application and region: