The global DNA & gene chip market size was valued at USD 4.50 billion in 2017 and is projected to exhibit a CAGR of 11.4% during the forecast period.The ability of DNA microarrays to allow comprehensive simultaneous analysis of thousands of genes has resulted in the success of this technology in the past decade. Technological advancements in computational capabilities, robotics, and fabrication methods for microarrays have led to rapid uptake of gene chips in clinical laboratories across the globe. Although the popularity of Next Generation Sequencing (NGS) has skyrocketed in the recent past, NGS is not yet able to completely replace microarrays in diagnostics and cytogenetics due to its relatively high price and steady rate of clinical implementation. 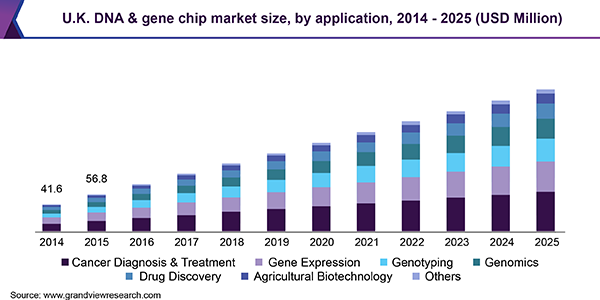 Absence of a well-structured and defined regulatory framework pertaining to use of NGS in clinics is one of the factors driving adoption of microarray methods over NGS protocols. Furthermore, less complicated and less labor-intensive steps for sample preparation in DNA gene chip has led to its widespread adoption among research groups and other life science entities.

Generation of massive DNA sequence information from the Human Genome Project and gene expression studies further pronounced the need for solutions to catalog this vast information into a usable form. This factor is one of the key forces behind extensive use of microarray technology in the past years. The technology has effectively proven its efficiency in accelerating clinical utility of genomic information available on public databases.

Research collaborations between companies and research communities is aiding the technology in gaining grounds in the field of genomics. For instance, in February 2016, Illumina, Inc. signed four biobanking agreements with University of Colorado, Montreal Heart Institute, Vanderbilt University, and Partners HealthCare. This collaboration was intended for the implementation of Illumina’s array platform for genotyping of sample collected at research institutes.

Capability of gene chips in high-throughput monitoring of biomolecules has triggered significant applications in new areas of interest such as pharmacogenomics. This factor has prompted several pharmaceutical firms to adopt this tool for acceleration of drug development process.

Effective implementation of genomic chips for gene expression analysis has also encouraged the use of this tool in non-traditional research areas such as environmental science and agriculture. Agri-biotech companies and research institutes are making significant use of microarray technology for testing of genetically modified foods and crop improvement to overcome challenges of crop reproducibility.

However, this technology is experiencing high market competition from other throughput technologies such as next-generation sequencing. Plummeting costs of sequencing technologies owing to rapid advances in NGS is expected to majorly impede the future market for DNA gene chips. Applications such as chromatin immunoprecipitation and gene expression are witnessing higher adoption of NGS platforms over microarrays due to its cost-effectiveness, specificity, and accuracy.

Consumables accounted for the largest share in the DNA & gene chip market in 2017 and the segment is expected to retain its dominance over the forecast period. This growth can be attributed to technological advancements in gene expression data analysis algorithms, coupled with easy availability of reagents and others ancillary components required for implementing a microarray procedure.

Instruments for microarrays are expected to witness substantial growth over the forecast period owing to introduction of new instruments for assistance in gene studies through microarray systems. For instance, in November 2016, Applied Micro Arrays announced its offering of Innopsys range of microarray scanners for research and diagnostic customers.

Cancer diagnosis and treatment accounted for the largest share owing to rising demand as well as popularity for targeted cancer therapies. Genetic chips provide a better picture of a patient’s cancer genomic profile, which further guides in selecting the appropriate cancer therapy.

On the other hand, drug discovery is expected to emerge as the fastest growing application segment as a consequence of increasing adoption of genomic chip arrays for optimization of different aspects of traditional drug discovery processes such as disease pathway identification, disease pathway validation, compound screening, and clinical trials.

The market has been segmented on the basis of end use into academic and government research institutes, hospitals and diagnostics centers, biotechnology and pharmaceutical companies, and others. Academic and government institutes accounted for the dominant share in the market in 2017 owing to accelerated uptake of DNA microarrays by researchers to conduct their research projects in a wide range of applications. The segment is also anticipated to register the highest growth rate over the course of the forecast period. 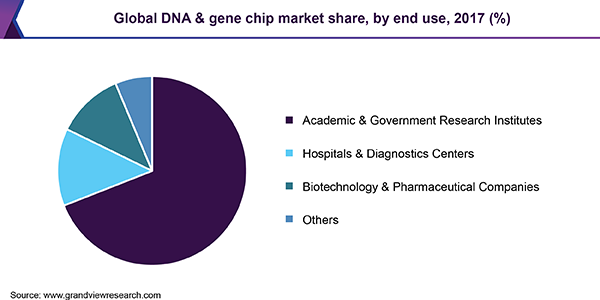 Hospitals and diagnostic centers accounted for the second-largest share in 2017. Fewer complexities pertaining to implementation of microarrays has enabled diagnostic developers to use this technology across various diagnostic aspects such as non-invasive prenatal testing (NIPT).

The North America market captured the largest share owing to factors such as presence of well-established players, advanced informatics infrastructure, presence of experts and skilled workforce, and ongoing genomic R & D practices on a large scale in the region.

Asia Pacific is expected to emerge as a promising market, registering the highest CAGR over the forecast period as a result of rising R & D investments in genomic research. Moreover, growing awareness regarding genetic tests for disease risk assessment and prevention is anticipated to have a positive impact on the growth of the regional market.

These entities are engaged in strategic partnerships with genetic labs and other life science companies to maintain their competitive edge in the market. For instance, in December 2014, Arrayit Corporation entered into a cooperative R & D agreement with the United States Department of Agriculture (USDA) for development of detection methods for bacterial and viral foodborne pathogens that include Salmonella, Campylobacter, Norovirus, hepatitis, Listeria, and E. coli. This development of detection technologies was based on Arrayit’s patented DNA microarray platform and USDA’s DNA sequence detection method.

This report forecasts revenue growth at global, regional, and country levels and provides an analysis of latest industry trends in each of the sub-segments from 2014 to 2025. For the purpose of this study, Grand View Research has segmented the global DNA & gene chip market report on the basis of application, product, end use, and region: