The global electric vehicle adhesives market size was valued at USD 39.3 million in 2019 and is anticipated to grow at a compound annual growth rate (CAGR) of 26.6% from 2020 to 2027. The growth of the market can be attributed to increasing initiatives by the governments of various nations to promote the production and adoption of electric vehicles (EV). 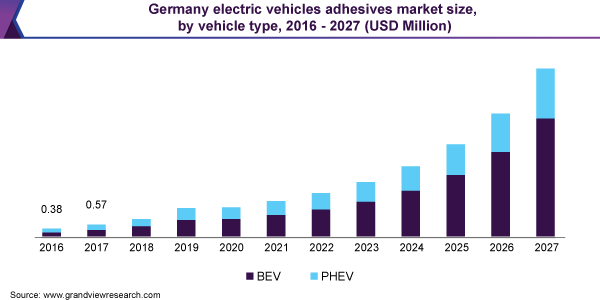 In 2010, among several other initiatives, Electric Vehicles Initiative (EVI) was a multi-government policy forum that was launched by the Clean Energy Ministerial for accelerating the adoption and introduction of electric vehicles across the globe. Considering environmental issues like global warming, it becomes vital to take preventive measures and act on reducing carbon footprints through harmful emissions on earth.

Many governments are providing incentives such as tax exemptions, tax credits, and additional benefits for adopting electric vehicles. The federal government of Germany earmarked a sum of USD 230 million for R&D in electric mobility as of 2017. As of February 2018, there were 29 different electric car models in the German market and around 1 million EVs are expected to be on German roads by the end of 2020. This is anticipated to augment the adhesives demand in the country and across Europe.

Along with the increasing production of electric vehicles, the market growth can be attributed to the shift in trend from welding and metal fasteners to adhesives, since the latter contributes significantly to weight savings and lower carbon emissions. The replacement of heavy mechanical fasteners with adhesives in the EV batteries offers a thinner and lighter bond, which improves the range of electric vehicles.

However, the growth can be obstructed considering the effect of the COVID-19 pandemic, which has impacted the global market as many manufacturing plants have been shut down on account of safeguarding the employees against the infection.

Key Chinese players such as CATL and BYD engaged in Li-ion battery manufacturing are under production delay as of March 2020. The companies involved in the value chain of the EV market faced a sharp fall in their stock prices since the outbreak. The delay in the production of electric vehicles and their batteries is anticipated to hinder the demand for adhesives.

The amount of adhesives consumed by BEVs is higher than that of PHEVs. According to IEA, the stock of BEVs is anticipated to increase at an accelerated rate by 2030, especially in the passenger light-duty vehicle segment. The growth in production can be indicated by increasing investments in the manufacturing of BEVs.

For instance, as per the news released in May 2019, a joint venture between Volkswagen and OEM Anhui Jianghuai Automobile obtained permission to begin the construction of their BEV plant. As per Volkswagen, the joint venture aims at producing 22 million electric vehicles in the coming decade, with 50% of production taking place in China. High consumption of adhesives in BEVs, in addition to the increase in the latter’s production, is expected to prove extremely fruitful for the global market over the forecast period.

Based on application, the market is segmented into pack and module bonding, thermal interface bonding, battery cell encapsulation, and others. The pack and module bonding segment was the largest segment in 2019, accounting for a volume share of 41.6%. The battery packs in electric powertrains make use of adhesives in their production, which leads to various benefits, such as improvement in the crashworthiness and integrity of the battery pack, lightweight, bonding of multiple substrates, and bonding of uncoated metal. 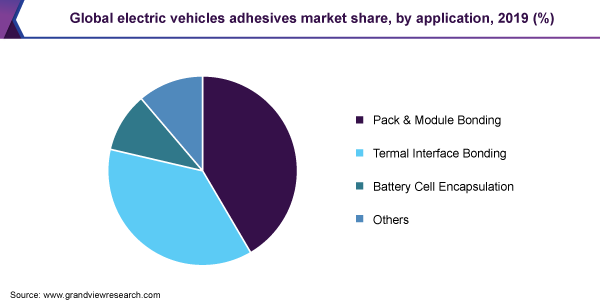 Thermal interface bonding was the second largest application segment in 2019 in terms of volume. Reduction in the size of batteries leads to more heat production that ought to be dissipated, which requires the usage of proper thermal interface materials that are capable of combining low viscosity and high thermal conductivity, along with insulation. In this scenario arises the need for adhesives that can provide mechanical rigidity and thermal connection, along with flexibility in design by eliminating the use of fasteners. In April 2019, Henkel launched silicone-free liquid gap fillers for electric vehicles, along with a new product that offered a thermal conductivity of 3.0 W/m-K. Increasing R&D activities leading to the launch of new types of adhesives for electric vehicles is anticipated to boost the market growth.

Battery cell encapsulation is expected to witness the fastest growth over the forecast period. A battery cell is the smallest packed form of a battery. Cells make use of structural adhesives between them to provide mechanical integrity. Adhesives are used for proper alignment of cells and their firm fixture for preventing any movement in case of vibrations, acceleration, or deceleration.

The Asia Pacific held the largest volume share of 52.2% in 2019. The region is the major consumer as China is the largest manufacturer of electric vehicles in the world. However, amidst the Covid-19 pandemic across the world, which has been reported to originate in China, the market growth is expected to remain sluggish in 2020-21. The unavailability of workers and raw materials has impacted the manufacturing of electric vehicles as of March 2020, which has impacted the demand for adhesives.

North America is expected to be the fastest-growing regional market with a volume-based CAGR of 27.1% during the forecast period on account of rising investments in EV manufacturing. For example, in July 2019, LG Chem announced its plan of building a second factory in the U.S. for producing EV batteries. LG Chem is amongst the leading battery manufacturers and it supplies its products to major companies, such as General Motors and Volkswagen. The factory is expected to begin its production in 2022. The growing production of batteries and EVs in the region is expected to fuel the market growth.

The company is engaged in the production of commercial vans using composite materials, which are expected to be recyclable and are corrosion and UV resistant, thus sustaining the vehicle’s life for 15-20 years. Such initiatives by manufacturers are expected to propel electric vehicle production, thereby generating more demand for adhesives.

The market has been characterized by intense competition owing to the presence of a number of leading players. Growing competition and demand for adhesives have compelled manufacturers to boost their capacity and expand their footprints. For instance, in July 2019, Henkel announced an investment of USD 45 million in upgrading its plant in North Carolina, the U.S. Apart from the major players, the industry has the presence of a large number of small and medium-sized companies as well. Some of the prominent players in the global electric vehicles adhesives market are:

This report forecasts revenue and volume growth at the global, regional, and country levels, and provides an analysis of the latest industry trends and opportunities in each of the sub-segments from 2016 to 2027. For the purpose of this study, Grand View Research has segmented the global electric vehicles adhesives market report on the basis of vehicle type, application, and region: