The global Electric Vehicle Communication Controller market size was valued at USD 61.1 million in 2019, registering a CAGR of 32.5% from 2020 to 2026. EVCC is a component that establishes a gateway to exchange information such as charging data between the charging station and the vehicle Engine Control Unit (ECU). Major factors responsible for the growth of the market are the rise in the adoption of electric vehicles (EV) and on-going work for the development of Electric Vehicle Supply Equipment (EVSE) with a major focus on fast-charging solutions. Market growth is further accelerated by growing Public-Private Partnerships (PPP) for the development of charging stations. Various governments are collaborating with Original Equipment Manufacturers (OEMs) and automotive manufacturers for the development of fast-charging stations, which is expected to increase the demand for EVCC Market.

The market is driven by rising demand for efficient charging systems owing to an increase in financial incentives, including subsidies and tax benefits, provided by several governments for buying electric vehicles (EVs). For instance, in April 2015, the Government of India announced the Faster Adoption and Manufacturing of Electric Vehicles in India (FAME India) scheme under the National Electric Mobility Mission Plan (NEMMP) 2020. Through FAME, the government will provide subsidies on purchases of three-wheeler and four-wheeler commercial EVs. In recent years, there has been an increasing demand for highway charging stations that mostly employ fast-charging solutions. This has further propelled the market growth. 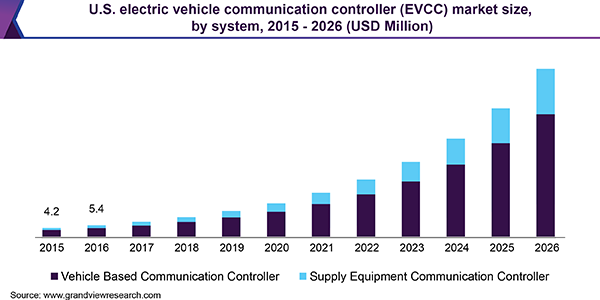 The growing emphasis of various governments and automobile companies on enhancing the performance of charging solutions bodes well for the growth of the market. For instance, in 2016, the Government of Norway made investments worth USD 180.3 billion for enhancing Electric Vehicle Supply Equipment (EVSE). Furthermore, countries such as France, U.K., Germany, and Belgium are focusing on developing EV charging and supporting infrastructure as well as emphasizing enabling interoperability across different EVs throughout the region. Various OEMs and EV manufacturers are looking to enhance the interoperability of charging infrastructure and electric vehicles and this is expected to keep the market prospects upbeat.

The surge in demand for EVSE for EV fleet in sectors such as logistics and transportation as well as Fast Moving Consumer Goods (FMCG) has fueled the need for EVCC. For instance, in April 2017, FedEx spent USD 10,000 on the purchase of EVSE equipment for its fleet of delivery vehicles for the city of Miami (U.S.) Furthermore, the growing focus of EVSE manufacturers such as Siemens AG, Efacec, and ABB, Ltd. on the development of advanced charging solutions such as pantograph that requires communication controller bodes well for market growth. For instance, Siemens AG has developed an Off-board Top-down-Pantograph that consists of a solution for communication with the central grid.

Government agencies are contracting OEMs and EV manufacturers for the development of nation-wide fast-charging networks, which is expected to drive the demand for EVCC. For instance, in 2012, ABB Ltd. and Mitsubishi Electric developed a nation-wide public fast-charging network for Estonia. The network consists of 165 fast-charging stations with CHAdeMO-standard fast chargers along the highways and in some of the cities. The project was funded under the CO2 Emission Quota Sales Agreement signed by the Government of Estonia and Mitsubishi Electric.

The SECC segment is expected to register the highest CAGR over the forecast period as a result of increased demand for advanced charging stations such as EV charging kiosks. In a charging kiosk, EVCC is used for the authentication of the Vehicle Identification Number (VID) and access card information. The unavailability of the additional workforce in developed countries such as the U.S., the U.K., and Germany has made it difficult for EV charging station owners to assign customer service representatives during heavy traffic. This is expected to drive the demand for a charging kiosk. Besides, smart city initiatives are expected to drive the demand for EVCC.

The wired charging segment dominated the global electric vehicle communication controller market in 2019 owing to the rising need for fast-charging that requires vehicle ECU to communicate with EVSE over a standard protocol. In recent years, there has been a rising demand for fast-chargers, which is a major factor responsible for the growth of the market. Furthermore, growing initiatives by EVSE and automotive manufacturers for the installation and deployment of fast chargers in highway charging stations and other public stations are expected to drive the demand for EVCC. For instance, Tesla, Inc. has, to date, installed more than 15,000 superchargers at 1,600 charging stations located at hotels, highways, wildlife parks, and other public destinations, wherein EVCC allows vehicle ECU communication with fast-chargers. Besides this, surging demand for inverted pantographs with EVCC for charging electric buses has fueled segment growth.

The market has been segmented into Battery Electric Vehicle (BEV) and Plug-In Hybrid Electric Vehicle (PHEV). The PHEV segment dominated the market in 2019 owing to the growing need for standardization of communication protocols between PHEV and grids. Also, ongoing PPPs for the development of communication standards for electric grids used for PHEV has further fueled the market growth. For instance, American Electric Power Company, Inc.; Ford Motor Company; New York Power Authority; Siemens AG; and Sacramento Municipal Utility District established the Smart Grid Interoperability Panel (SGIP). SGIP is working on the development of a standard for establishing communication between grids and PHEVs.

The BEV segment is estimated to register the highest CAGR over the next few years as a result of a rise in the number of BEVs. Market demand for BEVs is expected to rise significantly due to growing government initiatives toward the promotion of BEVs and the development of vehicle-based communication controllers. For instance, the government of Switzerland awarded funds worth USD 850 million to ABB, Ltd. for the development of EVCC for BEVs. Also, technologies such as Radio Frequency Identification (RFID) and Near-Field Communication (NFC) have enabled the installation of interactive, kiosk-based, and self-operated highway charging stations. This is expected to drive the demand for EVCC over the forecast period.

The passenger vehicle segment accounted for the largest share in the market in 2019 as a result of rising sales of passenger vehicles. This is owing to the availability of financial subsidies and incentives offered by various governments. Furthermore, various automotive manufacturers such as BMW AG, Ford Motor Company, and General Motors are providing chargers along with electric cars, which has driven the demand for EVCC Market. Besides this, the growing emphasis of automotive manufacturers on the installation of EV charging stations for their employees to raise awareness about electric cars has fueled demand. For instance, the installation of 100 EV charging stations at the parking lots of General Motors Company’s Detroit facility has led to an increase in demand for the company’s Chevrolet Volts electric cars from employees. 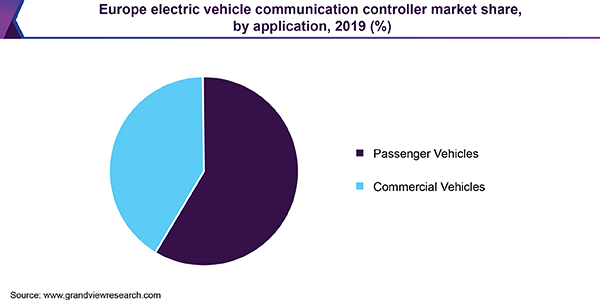 Commercial vehicles are anticipated to emerge as the fastest-growing segment over the forecast period owing to rising demand for commercial EVs such as trucks, vans, and buses from e-commerce, logistics, and public transport agencies. Governments of various countries are focusing on the replacement of fuel-based bus fleets with electric buses. Furthermore, companies such as Siemens AG; ABB, Ltd.; and Schneider Electric are focusing on the development of inverted pantographs for commercial vehicles, which is further propelling market demand.

Europe dominated the market in 2019, as a result of the high demand for EVCC owing to growing government initiatives toward the development of electric highways in the region. For instance, the governments of Norway, Germany, France, Sweden, the U.K., Denmark, and Italy have developed Norway to Italy Electric Highway. It consists of 180 fast-charging stations requiring EVCC for establishing communication between the grid and EVs. The growing focus of European oil companies such as BP Plc and Royal Dutch Shell Plc to capitalize their vast fuel and gas station network across the region for deploying electric vehicle chargers has significantly boosted demand for EVCC. Moreover, demand for EVCC has increased tremendously due to focus on the development of zero or low emission zones that consist of charging stations in the region.

Some of the key players in the market are ABB, Ltd.; BYD Auto; Efacec; Ficosa; LG INNOTEK; Mitsubishi Electric; Robert Bosch LLC; Schneider Electric; Tesla, Inc.; and Vector. These players have adopted strategies such as investments in R&D for the up-gradation of existing products and the launch of new products. For instance, in March 2019, Tesla, Inc. launched the new V3 Supercharging - designed specifically for Tesla’s grid-connected batteries.

Various companies have adopted strategies such as mergers, acquisitions, and partnerships to sustain competitive pressure. For instance, Blink Charging Co. entered into a partnership with Hubject to offer e Roaming service. The eRoaming service enables EV drivers to have a subscription of either of the companies to charge their EVs at charging stations owned by both. Furthermore, various companies are entering into PPPs for the development of EVCC. For instance, American Electric Power Company, Inc.; Ford Motor Company; New York Power Authority; Siemens AG; and Sacramento Municipal Utility District established the Smart Grid Interoperability Panel (SGIP).

This report forecasts revenue growth at global, regional, and country levels and provides an analysis of the latest industry trends in each of the sub-segments from 2015 to 2026. For this study, Grand View Research has segmented the global Electric Vehicle Communication Controller market report based on system, charging type, electric vehicle type, application, and region: