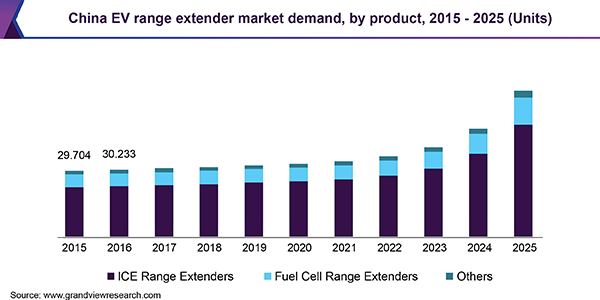 Over the last few years, several government bodies across the globe have been focused on offering financial as well as non-financial incentives, rebates, and subsidies to drive adoption of electric vehicles. As of 2018, global automobile manufacturers invested over USD 90 billion in manufacturing EVs. Increasing need to address the issue of range anxiety is expected to boost market growth over the forecast period.

As of 2017, there were over 4 million electric vehicles on the road and the number is expected to reach over 100 million by 2025. EVs involve several challenges such as limited mileage range and lack of charging infrastructures. In an attempt to meet mileage range requirements, drivers opt for alternative methods to conserve battery power, such as restricting use of air conditioning and other internal systems. This, in turn, hampers the overall driving experience. Urgent need to address these issues is expected to increase the adoption of range extender solutions. These cost-effective solutions boost the range of a vehicle’s battery by several miles.

Several product variants are available in the market, including internal combustion engine (ICE) range extenders and fuel cell range extenders. Governments across the U.S., U.K., and Germany, among others, have imposed regulations for automobile manufacturers to produce low emission or zero-emission vehicles, in turn reducing the overall carbon footprint across the globe. Manufacturers are further focused on enhancing the capacity and efficiency of battery technologies, especially battery electric vehicles (BEVs) and hybrid electric vehicles (HEVs). In line with this, key market players such as Mahle Group and BMW Group have introduced new technologies, such as the onboard fuel converter, which automatically recharges the battery while the vehicle is being driven.

High cost of batteries is a key factor likely to hinder market growth over the forecast period. Trade conflicts between the U.S. and China have also led to several excise duties being imposed on steel, aluminum, and other goods, which is expected to disrupt market growth.

Based on product type, the market has been segmented into ICE, fuel cell, and others. In 2017, the ICE segment accounted for the largest market share of a little over 70.0% owing to increasing demand and lower cost. Companies such as BMW Group and General Motors have introduced ICE EV range extenders for BMW i3 and Volt models respectively. Moreover, hybrid electric vehicles accounted for more than 70% in terms of sale in the global electric vehicles market in 2017.

On the other hand, fuel cell vehicles are expected to witness relatively lower adoption. The operability of fuel cell vehicles relies on the availability of hydrogen and methanol, which are produced from natural gases. This acts as a hindrance in their adoption. However, their lower carbon emission footprint as compared to ICE extenders is expected to act as an advantage, which is likely to boost segment growth over the forecast period. In 2017, Magna International, Inc. launched its first fuel cell range extender at the Geneva auto show.

Based on component, the EV range extender market has been segmented into battery packs, generators, electric motors, and power converters. The battery packs segment accounted for around 40.0% of the total demand in 2017. Standard battery packs are expected to have a life expectancy of up to five years, which is higher than that offered by other components.

Manufacturers are focused on developing new battery technologies to significantly reduce the cost of battery packs. This is expected to drive the adoption of standalone battery packs. For instance, in 2017, Nomadic Power GmbH developed towable batteries for EVs that provide on-demand battery recharge facilities.

In 2017, the passenger vehicles segment accounted for over 80.0% of the overall market demand. Key players are focused on offering innovative fuel cell range extenders for passenger vehicles. Governments across countries such as China, U.S., and Germany are offering tax rebates and other incentives for the purchase of low/zero emission range extender electric cars. Additionally, companies such as BMW Group, Volvo Car Corporation, Nissan Motors Corporation, and General Motor Company are looking to incorporate range extender technologies into their new models. 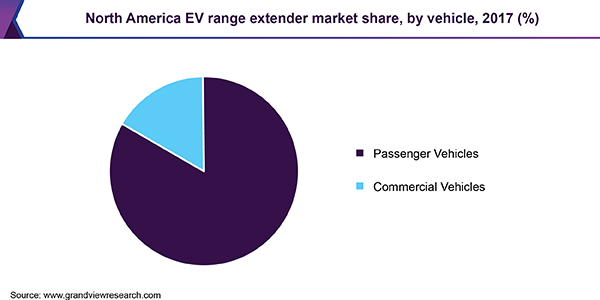 Growing product adoption in commercial vehicles across developed countries such as the U.S., Canada, and the U.K. is expected to drive the commercial vehicle segment over the forecast period. Range extended electric commercial vehicles can help reduce additional payload and costs along with minimizing the deployment of costly charging infrastructure at depots. For instance, Tevva Motors Limited offers extended range electric trucks ranging from 7.5 tons to 14 tons with long zero emission scope, on-board generators, and retro-fit solutions.

North America accounted for approximately 40.0% of the overall market in 2017. Market growth can be attributed to significant adoption of hybrid and pure EVs, along with a lack of charging infrastructure across the region. Factors such as increasing demand for improved battery range, high adoption of new technologies such as towable generators and batteries, and government initiatives promoting zero emission vehicles in the U.S. are expected to help increase demand for range extenders over the forecast period.

The Europe market is expected to exhibit a CAGR of 10.0% from 2018 to 2025. This can be attributed to high sales of electric vehicles in key countries such as the U.K., Germany, Norway, and France as well as the wide presence of key manufacturers in the region. Manufacturers such as BMW Group and Volvo Car Corp. are aiming to launch the new Range Extended Electric Vehicle (REEV), which is expected to drive the regional market over the coming years.

This report forecasts revenue growth at global, regional, and country levels and provides analysis of the latest industry trends in each of the sub-segments from 2015 to 2025. For this study, Grand View Research has segmented the global EV range extender market report based on product, vehicle, component, and region: