The global enteral feeding formulas market size was valued at USD 5.32 billion in 2018 and is anticipated to register a 7.2% CAGR over the forecast period. Rise in prevalence of chronic diseases such as cancer, stroke, multiple sclerosis, dementia, chronic liver disease, Chronic Obstructive Pulmonary Disease (COPD), and diabetes is projected to drives the demand for products that support patient with oral intake issues. According to Cancer Research U.K., nearly 17 million new cases of cancer were reported in 2018 around the globe. Cancer incidence was expected to increase by 62% between 2018 and 2040.

Rise in preterm births is one of the significant factors that propel the demand for sip feeds to meet the nutritional requirements of newborns. According to the Center for Disease Control and Prevention (CDC), in U.S., preterm births affected about 1 in every 10 newborns in 2016. In addition, rise in nutritional deficiencies including severe deficiency of protein and other micronutrients particularly in infants and pregnant women boost their demand. 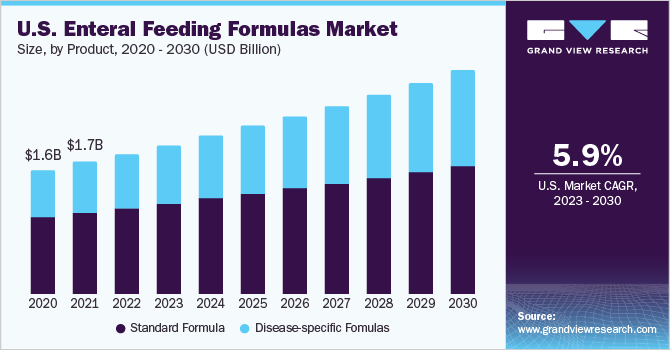 Increasing number of new product launches is another key factor positively impacting the growth of tube feeds. For instance, in 2017, Nestle Health Science launched three new sip feed products under its product line both adult and children population. The new formula contains variety of ingredients including real food, proteins, vitamin, and minerals and other ingredients. Rising number of home health agencies and nursing care also drives the demand as these centers supports patients in post-surgery recoveries. In addition, these centers serve a large number of old age people having difficulty swallowing.

Recent developments in tube feed products increases its demand, which in turn is expected to boost market growth. For instance, in 2018, Danone Nutricia Research of Group Danone introduced a new packaging for its sip feed product called the OpTri bottle. It combined the design of both bottle and pouch to improve patient usability and safety and reduces medical waste. Moreover, recent advancements in enteral feeding tubes is anticipated to drive the demand over the forecast period.

Ongoing clinical trials indicate the growth of new product developments. For instance, in 2018, Alcresta Therapeutics, Inc. released a new data pertaining to the short and long term study result from the clinical trial on RELiZORB (immobilized lipase) cartridge. The short term result (over 24 hours timeline) in patients within the age group of 5 to 34 years with Cystic Fibrosis (CF) associated Exocrine Pancreatic Insufficiency (EPI), showed that the plasma concentration of EPA and DHA surged by 2.8 folds with RELiZORB. Moreover, the long term result (over 90 days’ timeline) in patients with CF, showed the increase in red blood cells of DHA and EPA, for pediatric and adult patients with cystic fibrosis to hydrolyze fats in enteral formulas. However, risks associated with tube feeding including blockages, abdominal distention, infections, bleeding, nausea, and vomiting may also impacted the adoption rate, which in turn, may impede market growth.

In 2018, standard formulas emerged as the largest segment accounting for 64.3% of the market share in terms of revenue. Growing deficiency of micro and macro nutrients among hospital patients during both pre and post-surgery propel their demand. These tube feeds commonly contain proteins and polysaccharides intended for patients who are able to digest and absorb nutrients without any difficulty. The various macronutrient sources of these products include corn syrup solids, sucrose, fructose, casein, whey, soy, and milk protein concentrate and others.

The disease specific formula segment is expected to witness a lucrative CAGR of 8.6% around the forecast period. High prevalence of chronic disease, such as cancer, diabetes, and liver failure, is propelling the demand for disease specific formulas. In addition, recent product developments order to cater specific nutritional requirements of various diseases is expected to boost the demand in the forthcoming years. NOVASOURCE RENAL by Nestle Health Science and SUPLENA by Abbott are examples of standard tube feeds used in patients with Chronic Kidney Disease (CKD).

Cancer patients are prone to severe malnutrition induced by the tumor or its associated therapy including tumor removal surgeries, radiations, and chemotherapy which in turn surge the demand for tube feeding for nutritional support. Manufactures develop formulas to specifically target the cancer associated conditions, thereby increasing the adoption of enteral feeding formulas among cancer patients. For instance, ProSure by Abbott is intended for cancer patients suffering from cachexia and unintended weight loss. It promotes weight gain, builds and maintains lean muscle mass, strengthens immune response, and improves appetite.

Diabetes emerged as the fastest growing segment with a CAGR of 8.1% over the forecast period. Growing need for glucose control in hospitalized patients drives the demand for diabetes specific feeds. In addition, these feeds provide the benefits of reducing insulin requirements and duration of hospital stays, which in turn drives its demand.

In 2018, hospitals accounted for the largest market share of 49.8% in terms of revenue. Surge in demand from critically ill patients and high prevalence of chronic diseases including diabetes, cancer, inflammatory bowel disease, and others are some of the key factors driving the adoption among hospitals. According to various existing guidelines, tube feeding should be initiated within 12-24 hours of admission to ICU, unless the patient is inadequately resuscitated, hemodynamically unstable or GI tract in non-functional.

Hospital associated malnutrition is another significant factor that drives the adoption of tube feeds among hospitals. According to a recent data released by Baxter International, Inc. in association with American Society for Parenteral and Enteral Nutrition (ASPEN) and the Agency for Healthcare Research and Quality (AHRQ), around 2 million hospital stays in U.S. involves malnutrition. Moreover, growing awareness among healthcare professionals and changing role of dieticians in hospitals further contribute to growth.

Home care emerged as the fastest growing segment with a CAGR of 8.6% over the forecast period. Increasing number of home and nursing care centers is expected to boost the demand as these centers provide assistance to chronically ill as well as geriatric patients incapable of eating by mouth. Furthermore, government interventions in promoting safe enteral nutrition among home health care patients further promote the growth of tube feeds over the forecast period. For instance, Home Enteral Nutrition (HEN) Model of Care implemented by Australian government aimed at ensuring effective and appropriate delivery of home enteral nutrition for people of Western Australia.

In 2018, the adult stage emerged as the largest segment accounting for 68% of the overall market share in terms of revenue. Increased adoption of tube feeds among adults is one of the crucial factors driving the growth. In addition, commercial availability of large number of tube feed feeds for adults also contributes to its increased revenue share. Glucerna, Jevity, Osmolite, Promote, TwoCal, and Vital are some of the popular brands by Abbott Nutrition for adults.

Rising demand for tube feeds among pregnant women is also one of the key factors driving the market growth. Pregnant women often suffer from hyperemesis gravidarum, characterized by severe vomiting and nausea that may lead to dehydration and deficiency of vital nutrients. According to a research study conducted by Mount Mary University in 2016, enteral nutrition showed successful pregnancy outcomes in women suffering from hyperemesis gravidarum. Moreover, increasing demand for tube feeds amongst patients suffering from neurovascular disorders, positively impacted the growth. 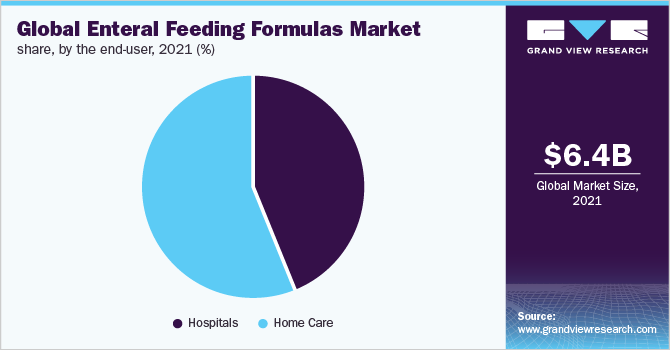 Pediatrics segment is expected to register lucrative CAGR of 8.3% during the forecast period. Factors such as rising number of preterm births and increased prevalence of malnutrition among hospitalized children propel the demand for these formulas. A research article published in Eastern Mediterranean Health Journal in 2017, reported that the prevalence of malnutrition among hospitalized infants and children in various countries ranged between 6.1% and 40.9%.

In 2018, North America held the leading market share of 28.8% in terms of revenue. Growing burden of chronic diseases such as diabetes, cancer, and other neurological conditions drive their regional demand. According to the Centers for Disease Control and Prevention (CDC), nearly 30.3 million Americans suffered from diabetes. Favorable reimbursement scenario favors the adoption of tube feeds among patients as enteral nutrition is covered under Medicare claims.

Rise in number of home health care centers further contributes to the growing demand for tube feeds as these centers handle a large number of chronic as well old age patients. According to CDC, nearly 12,400 home health agencies and 15,600 nursing homes were present in the U.S. as of 2014. Increasing number of government programs towards creating awareness on tube feeding further supports the growth in North America.

Asia Pacific is expected to register the fastest CAGR of 8.7% over the forecast period. Increasing incidence of preterm births is one of the major factors that propel the regional demand. According to the World Health Organization (WHO), India, China, Nigeria, Pakistan, and Indonesia are among the top five countries with largest number of preterm births. Factors such as increasing healthcare expenditure and recent improvements in healthcare infrastructure in many countries including China, Japan, India, and Singapore is anticipated to drive the market in the forthcoming years.

The market is consolidated with the presence of few major players including Abbott; Nestle Health Science; and Danone Nutricia. These players are continuously investing in R&D activities for new product developments that cater niche therapeutic areas with high growth potential to gain a competitive edge. Market entry is challenging for new players as the space is dominated by major MNCs with high brand recognitions. However, the market presents lucrative opportunities for small players in Asia Pacific due to its high growth rate.

This report forecasts revenue growth at global, regional, and country levels and provides an analysis of latest industry trends in each of the sub-segments from 2014 to 2025. For the purpose of this study, Grand View Research, Inc. has segmented the global enteral feeding formulas market report on the basis of product, stage, application, end use, and region: