The global ethylene carbonate market size was valued at USD 487.49 million in 2021 and is expected to expand at a compound annual growth rate (CAGR) of 6.9% from 2022 to 2030. The market growth is attributed to the increased demand for ethylene carbonate (EC) as a raw material to produce lubricants. Additionally, it is used as a solvent for many adhesives and sealants, plasticizers, resins, and polymers. The market is partially consolidated and only a few players are dominant in the market. Some of the large manufacturers including OUCC, Mitsubishi Chemical Holdings Corporation, Fujifilm Wako Chemical Corporation, TAOGOSEI CO., LTD., and BASF SE are expanding their product portfolio and geographical presence. 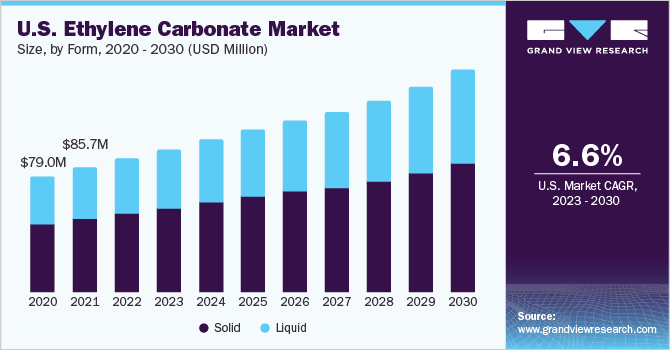 Ethylene carbonate is an organic compound. It is an ester of ethylene glycol and carbonic acid. EC, when placed at room temperature of 25 °C, is a crystalline transparent solid, which is practically colorless, odorless, and somewhat soluble in water. When placed in the liquid state (m.p. 34-37 °C), it is an odorless and colorless liquid.

Solid form dominated the global market with a revenue share of more than 50.0% in 2021. This is attributed to the rising usage in various applications such as chemical intermediates, solvents, plasticizers, and lubricants. EC in solid form is largely used in these applications to cater to the end-use industries such as automotive, medical, chemical, and industrial. Solid ethylene carbonate is used as an additive in the manufacturing of cosmetics, pharmaceuticals, and soldering fluxes. Moreover, in the oil and gas industry, it is used as a solvent to help reduce viscosity during high temperature or extreme pressure drilling operations where other fluids are too thin to function effectively.

The lubricants segment dominated the global market with a revenue share of over 30.0% in 2021 because of its wide usage in multiple end-use industries, such as automobile, industrial, and oil & gas. Moreover, the rising usage of such lubricants in the automobile industry and in the production of engines for collecting, cooling, and cleaning engines is expected to boost the demand for ethylene carbonate.

Lithium-ion battery electrolytes are used as crucial materials in the production of rechargeable batteries for electric vehicles (EV). Ethylene carbonate is extensively used in the manufacturing process of such electrolytes because of its highly polar attribute. According to Huntsman Corporation, approximately 75% of electrolyte, by volume, is solvents, mainly ethylene carbonate.

In addition, the product is used in the production of multiple surface coatings as a solvent. The increasing application of such surface coating products in the automobile sector for reducing the emission of VOCs and as durable protection for all vehicles is expected to have a positive impact on the surface coatings market, resulting in propelling the demand for ethylene carbonate globally.

The automotive segment dominated the market with a revenue share of over 40.0% in 2021. This can be attributed to the high dielectric strength of ethylene carbonate and its increasing usage in the automotive industry to ensure safety and protection against electric shock in the manufacturing of parts such as spark plugs, ignition cable sets, and battery terminals.

The oil & gas segment emerged as the second-largest end-use segment in 2021. It is attributed to the use of ethylene carbonate in the separation process of gas washing and oil fields. The U.S. and the Middle East countries are some of the largest contributors to the growth of the oil & gas industry. Rising demand for ethylene carbonate in these countries, especially in the oil & gas sector, is expected to boost the market growth. 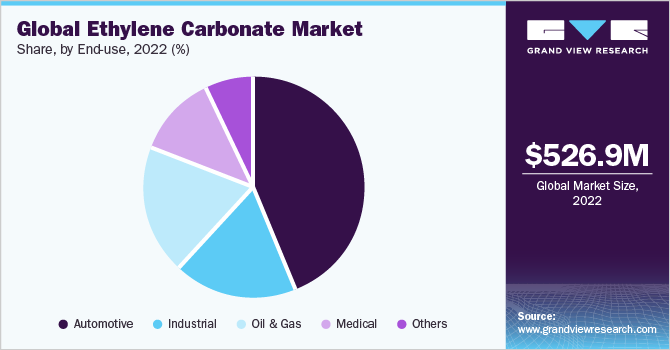 Apart from the aforementioned application industries, the product is widely used in many other industries and has applications in capacitor electrolytes, soil hardening agents, fiber processing agents, and resist strip solvents and as a raw material in the process of organic synthesis.

Asia Pacific dominated the market with a revenue share of over 35.0% in 2021. This is attributed to factors such as a strong industrial base, favorable government policies, and the presence of low labor costs that encourage key players to invest in the region. Additionally, the region is the leader in the production of lithium-ion battery electrolytes along with EV lithium-ion batteries. Such factors are driving the market.

North America is considered one of the major product markets due to the presence of large corporations in the automotive and chemical sectors. The usage of vehicles has been rising consistently in North America over the last decade. This is propelling the demand for ethylene carbonate. Furthermore, there was a high demand for EV vehicles in the U.S. market during the first quarter of 2022, which is expected to have a positive impact on the global market. 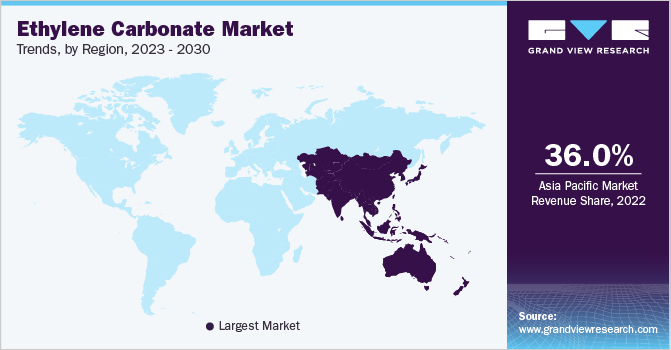 The European region is also expected to witness significant growth during the forecast period. The rapid growth of the industrial sector in the region is fueling the growth of the regional market. Moreover, the steady demand for electric vehicles in the automotive sector has increased the demand for lithium-ion batteries, resulting in the rising demand for ethylene carbonate. According to Visual Capitalist, Hungary, the U.K., Poland, Germany, and Sweden are the major contributors to the growth of the EV battery manufacturing business.

The market competition is highly dependent on various factors like requirements of various industries, geographical location, market leaders and key participants, competencies, and capacities of these companies in terms of production. Manufacturers are focusing on improving their product portfolios to gain a greater market share, and are simultaneously inclined towards sustainable production. For instance, in June 2021, manufacturer Huntsman Corporation declared that its division of performance products is planning to notably increase its existing capacity for ethylene carbonate in Texas by mid-2023. Some prominent players in the global ethylene carbonate market include:

This report forecasts revenue and volume growth at the global, regional, and country levels and provides an analysis of the latest industry trends and opportunities in each of the sub-segments from 2018 to 2030. For the purpose of this study, Grand View Research has segmented the global ethylene carbonate market report on the basis of form, application, end-use, and region: 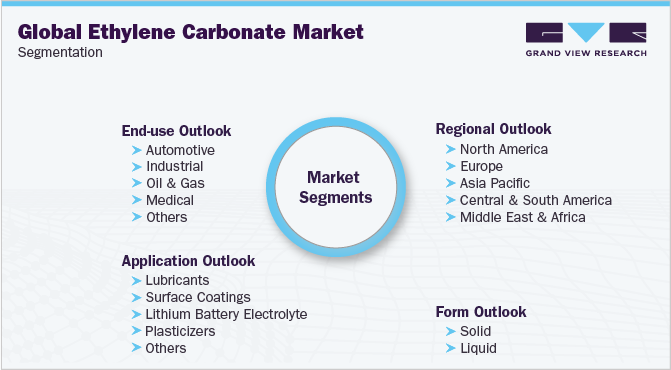 How big is the ethylene carbonate market?

What is the ethylene carbonate market growth?

Which segment accounted for the largest ethylene carbonate market share?

b. Asia Pacific dominated the ethylene carbonate market with a share of 36% in 2021. This is attributable to some of the attractive factors such as a strong industrial base, favourable government policies and the presence of low labor costs that encourage key players to invest in the region.

Who are the key players in the ethylene carbonate market?

What are the factors driving the ethylene carbonate market?

b. Key factors that are driving the market growth include the growing utilization of the product in as a reaction solvent for various chemical reactions, solvent for various polymer compounds, an extractant, a lubricant, a foaming agent, and an electrolyte solvent for lithium-ion secondary batteries, which are used in EVs.