The Europe diabetes devices market size was valued at USD 6.4 billion in 2018 and is projected to grow at a CAGR of 4.0% over the forecast period. The demand for diabetes devices is on a rise owing to the increasing incidence of diabetes due to sedentary lifestyle, obesity, and unhealthy eating habits. Obesity is the primary driving factor responsible for causing diabetes among all age groups.

Increasing diabetes patient pool and rising awareness about diabetes management & control are among the factors expected to contribute towards this market’s growth over the forecast period. According to the International Diabetes Federation Report, 2017, approximately 66.0 million people in Europe suffer from diabetes, and this number is expected to rise to 81.0 million by 2045. Germany, U.K., France, Spain, and Italy are the top five countries in the European region with the highest incidence of diabetes. 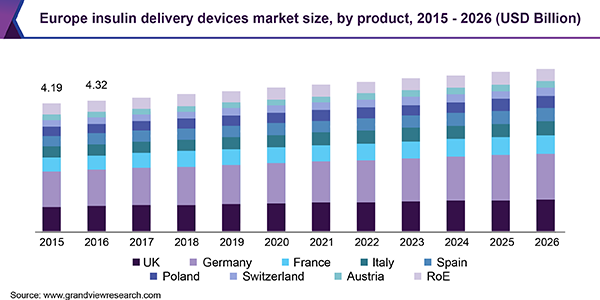 Obesity is one of the leading causes of diabetes in individuals. According to the WHO, in 2014, around 50% of the population was overweight and over 20% of the population was obese in the European region. The prevalence of obesity is higher among men. Risk factors, such as the rising incidence of obesity is directly linked to the increasing incidence of diabetes, thus resulting in a high diabetes prevalence. Consequently, this large diabetes population is propelling the diabetes devices market.

Several government initiatives and various awareness campaigns are also propelling the market growth. UK DESMOND education program is a structured patient education and management program designed for newly diagnosed patients with type 2 diabetes. It aims to support people in identifying early health risks. There is also a rise observed in government funding for healthcare. According to the International Diabetes Federation, healthcare expenditure due to diabetes is increasing at a rapid pace. In 2017, healthcare expenditure for diabetes, in adult population, was USD 207.0 billion and is expected to reach 214.0 billion by 2045. Such supportive initiates and rising awareness is anticipated to drive the diabetes devices demand over the forecast period. 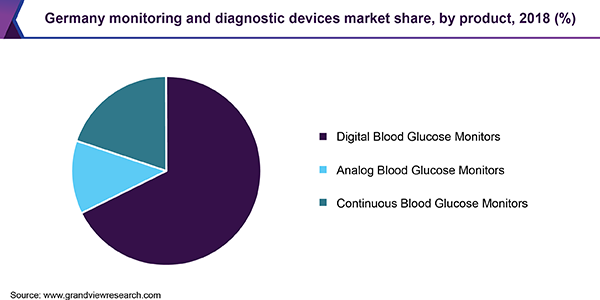 Insulin delivery devices are segmented into insulin pens, insulin pumps, syringes, and jet injectors. Insulin pen devices segment accounted for the largest market size and is growing at a CAGR of 1.95% over the forecast period. Insulin pens are gaining popularity due to its unique features such as easy to carry, user friendly design, and ease of usage. Furthermore, product advancement and high usage of insulin pen are some of the factors propelling the market.

An insulin pump is a small device that is worn by patients externally to deliver precise doses of fast-acting insulin according to the body. The popularity of insulin pump(s) is growing due to its advantages such as precise insulin delivery, predictable insulin delivery, and reduces wide fluctuation in blood glucose. It is an apt option for athletes because it delivers precise insulin dosage and helps boost energy and performance. Hence, the insulin pumps segment is anticipated to grow at the fastest CAGR over the forecast period.

The insulin syringes segment is also growing at a rapid pace owing to its variety of usage. Apart from being a cost-effective option, they are also available in different sizes to match various insulin dosages requirement of patients. Usage of syringes is relatively high in developing countries due to its low cost, but it is expected that the patient will switch to the aforementioned alternatives in the near future

The Europe diabetes devices market is analyzed for U.K, Germany, France, Italy, Spain, Poland, Switzerland, and Austria. Germany is the leading market owing to its well-established healthcare sector. The German medical technology industry is a highly innovative and dynamic sector. Most of the advanced treatment options are available in the country.

The German Diabetes Foundation predicts the number of diabetes cases in Germany to be around 9.0 million which is expected to augment the demand for diabetes devices in the country. Increasing international research collaborations on technology advancement and awareness regarding diabetes among the people are some of the market opportunities for the market players. However, competition arising from biosimilar and generic drugs is primarily challenging the market growth.

U.K. market held the second largest market share in Europe diabetes devices market. The market is primarily driven by rising prevalence of diabetes and increasing government initiatives. Government initiative programs such as National NHS Diabetes are primarily boosting awareness regarding the disease and available treatment solutions. The country has a universal healthcare system, where majority of the population is covered under free healthcare services offered by national healthcare centers.

Major players are focusing on new merger & acquisitions, product launches, advancements in existing products & technologies, and other strategies to expand their product portfolio & strengthen their presence. For instance, in July 2017, Abbott Laboratories and Bigfoot biomedical entered into a partnership to automate insulin delivery for both people on injection and pumpers. This will enable Bigfoot to develop multiple systems using Abbott’s Free Style Libre Sensor Technology.

This report forecasts revenue growth at global, regional, & country levels as well as provides an analysis on the latest industry trends in each of the sub-segments from 2015 to 2026. For the purpose of this study, Grand View Research has segmented the Europe diabetes devices market report on the basis of product, material, end use, and region: