The global astaxanthin market size was estimated at USD 1.0 billion in 2019. Increasing awareness about nutrition for a healthy lifestyle and growing preference for dietary supplements due to the high cost of hospitalization are factors anticipated to drive the demand for astaxanthin and natural antioxidants. Astaxanthin is regarded as a potential antioxidant that has proven its ability to protect human cells from inflammation and oxidation.

The anti-inflammatory properties of astaxanthin help in reducing pain in the muscles, joints, and tendons of patients suffering from chronic arthritis. Furthermore, increasing prevalence of diseases such as diabetes,cardiovascular diseases, cancer, and cognitive health problems is expected to drive the market. For instance, astaxanthin helps to increase general blood flow and reduces blood sugar in patients with blood pressure and diabetes. 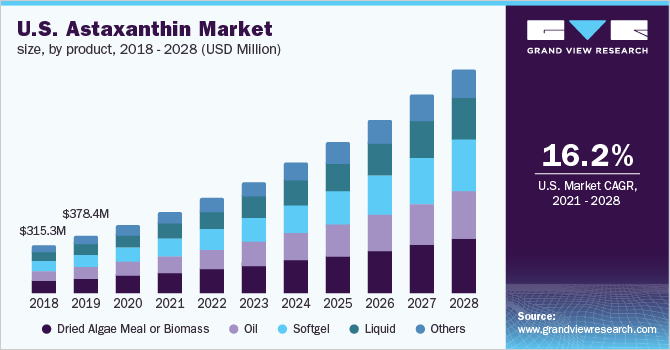 Significant technological advancement is also a key driving factor in the market. Cost-effective technologies are driving the production of synthetic astaxanthin. For instance, ALGAMO produces astaxanthin using photo-bioreactors and micro-modules to focus on reducing water wastage and saving electricity. Moreover, the sealed microalgae cultivation system is yet another manufacturing technology that minimized the risks associated with entrapment of foreign objects, microbial contamination, and agricultural residue, thereby increasing yield and reducing waste.

Astaxanthin in the form of nutraceuticals is also being used to prevent the occurrence of chronic diseases, improve health, and delay the aging process. With the growing interests in the field of dermatology, skin homeostasis benefits of astaxanthin such as antioxidant, photoprotective, and anti-inflammatory effects have been proposed.

Natural astaxanthin held the largest market share in 2019 and is projected to grow at a rapid pace over the coming years. Its production from natural sources such as algae or yeasts has become one of the most popular activities in biotechnology, owing to its great demand in feed, food, pharmaceutical, and nutraceutical applications. Furthermore, high yield of carotenoid, increasing demand for natural food supplements, and low maintenance costs are the key factors contributing to segment growth.

In addition to the practical advantages, significant improvements in culture conditions supported by omics technologies, natural processes, and new sources to produce astaxanthin, and other carotenoids are the drivers projected to fuel market growth over the forecast period.

Demand for natural food supplements and growing awareness about the adverse effects of chemical products among consumers can be attributed to the anticipated production of natural astaxanthin in the future. Some market players, such as BCG and Cyanotech, are currently focusing on developing advanced technology for microalgae cultivation and harvesting.

Dried algae meal or biomass accounted for the largest revenue share in 2019 and is expected to show steady growth over the next seven years. Some of the natural sources that are being used include the Haematococcus pluvialis, crayfish and krill oil, and the red yeast Xanthophyllomyces dendrorhous. Haematococcus algae meal is approved in Canada, U.S., and Japan as color additive for salmon feeds like farmed trout, salmon, prawns, sea bream, and ornamental fish.

Softgels are expected to emerge as the fastest growing segment in the astaxanthin market due to their higher stability, as compared to tablets and liquids. Corn starch and glycerin are used to produce veggie softgels and are preferred by nutraceutical providers owing to their natural origin and fewer adverse effects. Many consumers have been reported to take astaxanthin softgels to maintain skin health and eyesight. Key players manufacturing astaxanthin softgel capsules include Algalif Iceland ehf; Algatech LTD.; and AstaReal, Inc.

Aquaculture and animal feed is the largest application segment as a result of its extensive usage as feed additive. Carotenoid- a type of astaxanthin has been used for fish coloring processes and improving the animal texture by enhancing their reddish pigment.

The nutraceutical segment is estimated to witness the most lucrative growth over the forecast period. Due to the astaxanthin’s capacity to neutralize free radicals, it has become a profound choice for treating several health ailments such as cardiovascular diseases, diabetes, gastritis, and muscle endurance.

North America dominated the overall market in 2019 due to the presence of awareness programs by non-profit organizations, and the existence of the key market players. For instance, Natural Algae Astaxanthin Association (NAXA) is focused on increasing awareness about astaxanthin usage. Hence, such organizations are estimated to rise the regional market share. 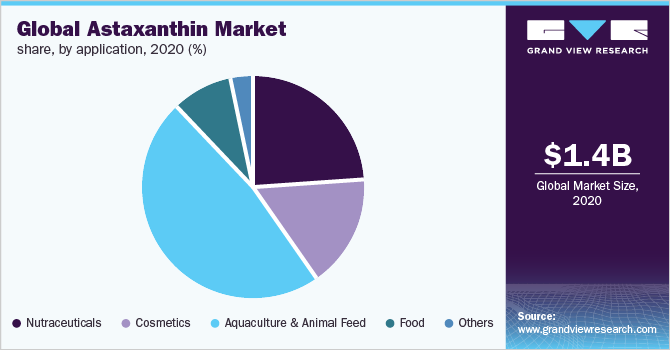 Asia Pacific, on the other hand, is estimated to witness significant growth over the forecast period. The presence of key manufacturers in China with technologically advanced operating facilities including InnoBio and BGG is estimated to drive the market in this region. In addition, growing awareness about astaxanthin among healthcare professionals, the existence of a large population suffering from nutritional deficiency, and a flourishing cosmeceutical industry that uses organic resources are some other key factors propelling the market growth.

In addition, the companies are focusing on management of their resources so as to make astaxanthin the main product in biotechnology. Furthermore, in October 2018, BGG along with Solix Algredients (Solix) and Algae Health Sciences (AlgaeHealth) announced that AstaZine Natural Astaxanthin features a new technological platform named Dispersa, which will be used for other BGG products.

This report forecasts revenue growth at global, regional, and country levels and provides an analysis of the latest industry trends in each of the sub-segments from 2016 to 2027. For the purpose of this study, Grand View Research has segmented the global astaxanthin market report on the basis of source, product, application, and region:

How big is the astaxanthin market?

What is the astaxanthin market growth?

Which segment accounted for the largest astaxanthin market share?

b. Natural astaxanthin dominated the overall market with the largest share of 51.1% in 2019 due to its great demand in feed, food, pharmaceutical, and nutraceutical applications coupled with high yield of carotenoid, increasing demand for natural food supplements, and low maintenance costs.

Who are the key companies/players in astaxanthin market?

What are the factors driving the astaxanthin market?

b. High demand due to its antioxidant properties and increasing applications in the aquaculture industry, growing demand for natural food coloring agents with lesser adverse effects as compared to other chemical products are key factors estimated to boost the market growth.