The global roaming tariff market size was valued at USD 67.4 billion in 2019 and is expected to expand at a compound annual growth rate (CAGR) of 4.5% from 2020 to 2027. The telecommunications industry is one of the key industries during the ongoing COVID-19 (coronavirus) pandemic. With the pandemic spreading, the global population is practicing social distancing and is staying at home, resulting in unprecedented growth in network traffic volume. Therefore, to handle the situation, fulfill additional network requirements, and ensure uninterrupted connectivity, governments, content partners, and operators are engaged in taking several measures such as spreading awareness among customers to use mobile networks wisely, adding extra network capacity, also providing free access to essential websites. 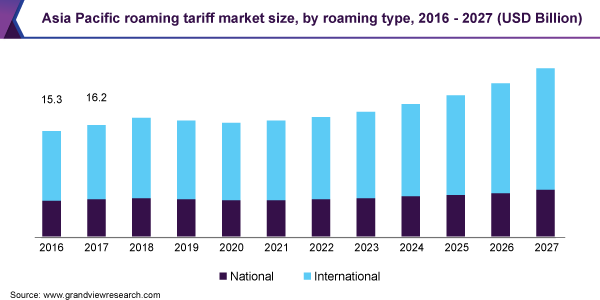 The rising number of mobile phone users and increasing mobile internet penetration are some of the factors anticipated to further drive the market growth. Additionally, the increase in the adoption of 3G- and 4G-enabled smartphones is further expected to bolster the market growth. For instance, according to the International Telecommunication Union (ITU), the recorded percentage of the global population having internet access in 2018 was 80.9%, while the recorded number of internet users globally was 3,896 million.

The growing number of unique mobile subscribers is also expected to contribute to market growth over the forecast period. For instance, according to the GSM Association (GSMA), the number of unique mobile subscribers accounted for 5.0 billion in 2017. In addition, the emergence of 5G technologies providing high-speed internet connection coupled with lower latency is also anticipated to drive the growth of the mobile industry, in turn contributing to the market growth.

The increasing international tourism is further expected to drive growth of the market for roaming tariff. According to the International Trade Center (ITC), international tourism accounts for 30% of the global trade services. For instance, when a subscriber travels from one country to another roaming tariff charges are imposed by the network providers thereby benefitting the mobile network companies when the network operators changes, thus further bolstering the market growth.

However, the rising government intervention and increasing regulations have significantly reduced the profit margin of roaming tariffs, thus hindering the growth. Furthermore, networking services such as 4G and 5G are expected to pressurize various network service providers owing to the rising demand for enhanced network services among consumers. However, advanced network services require heavy financial investments, which is expected to create a hindrance for various service providers and small-sized operators.

International roaming dominated the roaming tariff market with a revenue share of 77.28% in 2019. This was initially due to the rise in international tourism activities coupled with key network operators introducing various tariff plans and international travel sim cards. However, since the end of 2019 and until the last few months of 2020 the international tourism industry is expected to witness a significant dip owing to the ongoing global pandemic COVID-19. This left a significant impact the segment growth. In order to curb the situation countries across the globe mandated lockdowns wherein people were advised to stay at home and all inter/intra country movements were banned which left a negative impact the market growth in the last few months. Nevertheless, the market is expected to bounce back over the forecast period with several technological advancements introduced by operators.

Meanwhile, the national roaming type segment is estimated to expand at a CAGR exceeding 2% over the forecast period. The segment is expected to witness considerable growth over the forecast period owing to stringent government regulations. For instance, the Telecom Regulatory Authority of India (TRAI) imposed a special roaming tariff plan in India, according to which all incoming voice calls for prepaid and post-paid subscribers in national roaming will be free of charge.

Wholesale roaming dominated the market revenue with a share of 73.60% in 2019, attributed to the increasing number of international tourists across the globe. According to the Organization for Economic Co-operation and Development (OECD), in 2016, inbound tourism in developed regions such as North America and Europe exceeded 87% and 60% respectively, thereby contributing to the market growth.

The distribution channel segment has been segregated into retail roaming and wholesale roaming. The retail roaming segment is estimated to expand at a CAGR exceeding 3.0% over the forecast period. This can be attributed to increasing number of smartphone users coupled with the growing penetration of 3G and 4G networks.

Data held the leading market share of 66.76% in 2019. This high share is attributed to the growing demand for smartphones and feature phones coupled with the use of mobile data services while roaming. Furthermore, owing to ongoing COVID-19 pandemic people across the globe are practicing social distancing and to keep the businesses running companies introduced the work from home policy. This work from home policy created a huge demand for data services. 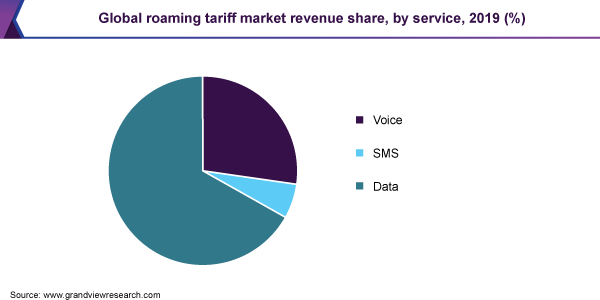 The voice service segment is also estimated to witness considerable growth due to the fact that various customers prefer making calls over text messages even while traveling internationally. The SMS service segment is also anticipated to witness significant growth owing to ease of use of this service as the feature is available on all phones and has no load on the mobile network.

Europe dominated the market for roaming tariff with a revenue share of 42.19% in 2019. This is attributable to the rising disposable income among upper- and middle-class population. Additionally, the European Commission has introduced the Roam like at Home policy to prevent additional roaming charges and reduce bill shock. According to this policy, individuals traveling across Europe can pay domestic prices for SMS, data, and calling services.

Asia Pacific is anticipated to expand at the highest CAGR of over 5% from 2020 to 2027. In developing countries such as India, roaming charges are applicable when traveling from one service area to another, even while using the same carrier. This factor is expected to contribute to the Indian market growth over the forecast period.

The market is highly consolidated and characterized by high competition. The companies are particularly focusing on mergers and acquisitions as part of their growth strategy to hold major market share. Reduced prices of roaming tariffs have resulted in increased price competition among key operating players. For instance, in August 2018, Vodafone Group Plc. and Idea Cellular Ltd. merged to form a company called Vodafone Idea Limited. This merger enabled both the companies to utilize their market potential and vast resources as well as expand the subscriber base of the merged company.

Similarly, in January 2019, America Movil announced the acquisition of Telefonica Moviles Guatemala and Telefonica Moviles El Salvador (regulatory approval pending). These companies provide mobile and fixed telecommunication services that include voice, data, and pay-TV in Guatemala and El Salvador. The company carried out these acquisitions with an aim to expand its operations in both locations. Some of the prominent players in the roaming tariff market include:

This report forecasts revenue growth at the global, regional, and country levels and provides an analysis of the latest industry trends from 2016 to 2027 in each of the sub-segments. For the purpose of this study, Grand View Research has segmented the global roaming tariff market report based on roaming type, distribution channel, service, and region:

How big is the roaming tariff market?

What is the roaming tariff market growth?

Which segment accounted for the largest roaming tariff market share?

b. Europe dominated the roaming tariff market with a share of 42.2% in 2019. This is attributable to rising disposable income of upper- & middle-class population and ‘Roam like at Home’ policy introduced by the European Commission to prevent additional tariff.

Who are the key players in roaming tariff market?

What are the factors driving the roaming tariff market?