The global halloysite market size was estimated at USD 33.0 million in 2019. It is expected to expand at a compound annual growth rate (CAGR) of 7.2% during the forecast period. Surging demand for halloysite in novel applications in the medical, cosmetics, and paints industries is projected to drive the market over the forecast period. In addition, manufacturers are increasingly acknowledging the use of the product in the production of tissue engineering scaffolds, which in turn is poised to spur the growth of the market.

Production of raw material varies annually with manufacturers changing trends to meet the annual projected demand for halloysite material. Extensive integration of manufacturers to the raw material supply leads to its abundance, which in turn benefits the overall market growth. Besides this, rising raw material extraction due to spiraling product demand is anticipated to work in favor of the market. 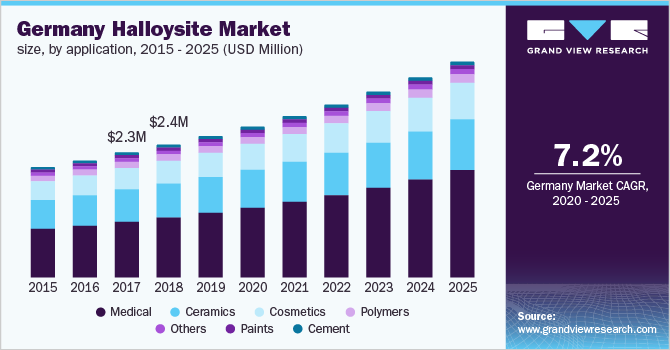 The U.S. accounted for approximately three-quarters of the overall consumption of ceramics in North America in 2017, in terms of volume. The market in the U.S. is likely to remain at the forefront of North America throughout the forecast horizon owing to the increasing production of ceramic ware and other ceramic-based products in the country driven by the booming building & construction industry.

The substance is recognized as safe to use in critical and niche applications by agencies such as the European Commission. The presence of a limited regulatory framework for use of products across various end-use industries is estimated to fuel the demand for halloysite over the forecast period.

The market exhibits a significant threat of external substitution by kaolin and other clays, primarily in the ceramics industry. In addition, the high consumption of the product by the ceramic industry coupled with limited availability increases the substitution threat. However, the product is expected to substitute a number of nanomaterials currently used in applications such as medical and cosmetics.

The global halloysite market is anticipated to be driven by growing demand from the ceramic industry, where the halloysite is used as an additive to improve the performance characteristics of the end products. Halloysite is a crucial component in ceramics, where it is used with kaolin on account of having the same molecular structure. Thus, rising demand for ceramics is likely to aid halloysite demand over the coming years. The use of ceramic tiles in restaurants, offices, malls, and resorts, particularly in developing countries such as India, China, and Brazil, is projected to augment market growth over the forecast period.

Halloysite’s tubular molecular shape enables its use in the manufacturing of fine China and porcelain, as it has low iron and titanium content, which aids in producing ceramic products with exceptional whiteness and translucency. In addition, the fineness of halloysite clay particles aids its use in glazing applications, driving its demand in sanitary ware applications. The ceramic materials fulfill demanding hygiene specifications along with chemical and mechanical resistance requirements in bathrooms. The growth of the sanitary ware sector is expected to augment the demand for ceramics over the forecast period, thereby driving the halloysite market.
The demand for halloysite is expected to witness growth owing to its increasing demand in novel applications as well, such as polymer nanocomposites, paints, cement, etc. Halloysite nanotubes have recently become the subject of interest and research attention for being used in polymer nanotubes and polymers in general, as a new type of additive enhancing the mechanical, thermal, and fire-retardant performance of polymers.

Halloysite is mainly composed of aluminosilicate and has a predominantly hollow tubular structure with the chemical composition Al2(OH)4Si2O5(2H2O), which aids in providing superior performance to polymers in terms of flame retardancy, among other benefits. This is likely to have a positive impact on the demand for the product over the forecast period. In addition, halloysite nanotubes are considered an ideal material for preparing polymer composites as halloysites are rigid materials. Also, in terms of aspect ratio, the crystal structure of halloysite nanotubes is similar to that of carbon nanotubes.

According to Applied Mineral Inc., the global production of halloysite in 2016 was around 25,000 tons, in stark contrast to kaolinite, which recorded a production volume of approximately 6.1 million tons in the U.S. in the same year. Halloysite is expected to have limited reserves, with very few companies mining the product in the U.S. and New Zealand. The overall reserves are very low as compared to its substitutes or similar products such as kaolinite. As a result, the adoption of the clay is relatively low.

Companies such as Applied Minerals, Inc. and Imerys are investing in exploration activities in search of new reserves. However, no new mines or reserves for halloysite have been reported as of now. Hence, depleting halloysite reserves and decreasing the production of the clay is expected to restrain the market growth. Furthermore, major use of the product in ceramics applications is expected to limit its availability in other applications with high commercial potential.

There is a high demand for the product for use as a carrier for manufacturing various cosmetic products such as creams, gels, and lotions. Halloysite offers immobilization of a solid-phase ingredient and sustained release of liquid ingredients in cosmetics. The aforementioned factors are likely to boost the growth of the cosmetics segment.

Polymer manufacturers are increasingly employing the product as an additive for their offerings as it helps improve physical properties such as melting point and strength. Currently, the product is widely utilized as a filler in polyvinyl chloride, polystyrene, high-density polyethylene, and polyethylene terephthalate.

The growth of the ceramic ware industry, thanks to rising demand by the HORECA sector coupled with high consumer expenditure on home décor, is anticipated to register a noteworthy CAGR of 6.7% in terms of revenue over the forecast period.

Halloysite nanotubes have a high aspect ratio and unique crystal shape, which enhances the adhesion and strength of paints and coatings. The use of halloysite-based paints and coatings helps eliminate fungal growth on wallboards and the accumulation of barnacles on ships. As a result, the demand for the product as a suspension agent in the industry is estimated to grow over the forecast years.

In terms of revenue, Europe held the largest market share of over in 2019 of the global market. A shift in the manufacturing bases from European to Asian countries on account of low production costs is expected to affect the ceramics demand, which, in turn, is anticipated to limit the growth of the halloysite market in Europe. Growing demand for specialized clays in the Asia Pacific region is further anticipated to impact Europe’s share in the global halloysite market. 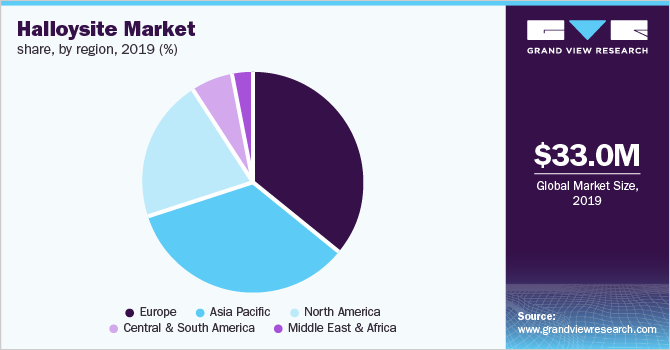 The demand for halloysite in Germany is expected to be primarily driven by its increasing application scope in the medical and ceramics industries. I-Minerals’ Ultra Hallopure halloysite, a product manufactured by one of the major companies, was tested as a new wound treatment material. The companies in the economy have invested significantly in R&D pertaining to the development of advanced products, which, in turn, is expected to drive the market growth over the forecast period.

In terms of volume, Asia Pacific is expected to grow at the fastest rate over the forecast period. Increasing spending in the medical sector in the region is expected to have a positive impact on the demand for halloysite-based products such as implants. The rising demand for advanced ceramics in medical applications is likely to increase the demand for halloysite as it enhances the performance of advanced ceramics. 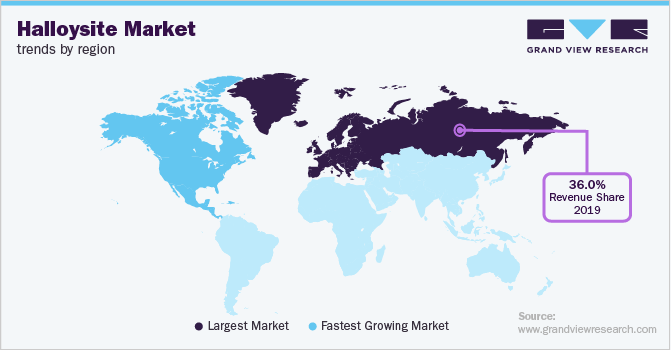 China is anticipated to dominate the product demand in Asia Pacific over the forecast period. Major brands such P&G and Unilever have their manufacturing facilities established in China owing to the low manufacturing cost, and consequently, the country has become a major manufacturing hub for the majority of the cosmetics manufacturers. The product demand is likely to increase in China cosmetics industry over the forecast period as halloysite is used as a filler in moisturizers and other personal care products.

The industry is characterized by the presence of a limited number of players. Small-scale companies majorly compete on the basis of product quality as the type of product manufactured depends on the mine from where the material is sourced. The demand for halloysite is high in major ceramic product manufacturing companies.

Halloysite production is volatile in nature as the process has not yet been fully commercialized. Halloysite clay available in the market has been assigned several grades depending on its purity level. Key market players are resorting to the production of advanced grades of halloysite to cater to the demands of a niche market.

This report forecasts revenue growth at global, regional & country levels and provides an analysis of the industry trends in each of the sub-segments from 2014 to 2025. For the purpose of this study, Grand View Research has segmented the global halloysite market report on the basis of application and region: 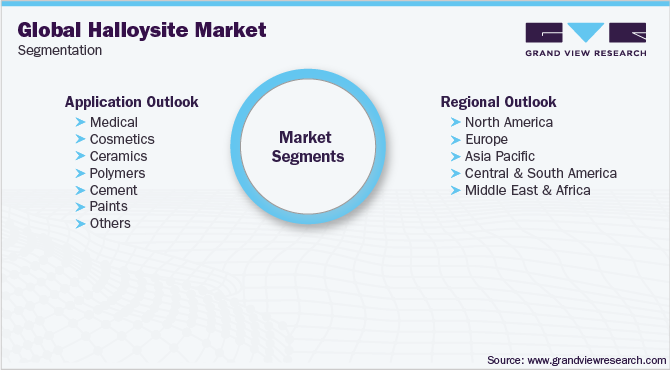