Heart failure POC & LOC devices market size was estimated at 45.4 million in 2018 and is projected to grow at a CAGR of 16.2% during the forecast period. Owing to miniaturization, lab-on-chip (LOC) technology exhibits high potential to improve disease diagnosis with respect to cost-effectiveness, throughput, ease-of-operation, and analysis. R&D towards the development of the novel LOC-based assays for diagnosis of cardiovascular disease (CVD) is expected to drive the market.

Lab-on-a-Chip (LOC) technology for diagnostics has been implemented for both Point-of-care (POC) diagnostics and central lab testing. However, for heart failure diagnosis, only POC tests are commercially available in the current market. This, in turn, has created lucrative opportunities for the emerging diagnostic developers that are striving to establish a substantive position in this market. 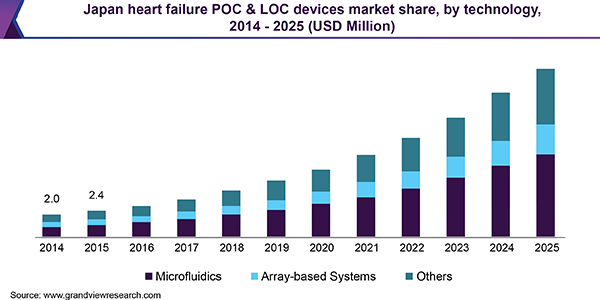 The presence of several clinical manifestations of the heart failure and symptoms that are often non-specific has made the conventional diagnosis mode complicated. This has triggered the development of a substantial number of POC tests as these accelerate decision-making for an individual with the risk of developing heart disorder. POC tests aid in the detection of cardiac markers and other time-critical parameters for efficiently addressing the challenges of health disparities.

Furthermore, the government bodies are undertaking several measures to circumvent the rising healthcare expenditure caused due to hospital admissions. For instance, the European Commission has funded a project- KardiaTool that aimed at the development of low-cost LOC assays for detection of biomarkers from saliva samples to detect the risk of heart failure.

The absence of a well-defined reimbursement for the POC devices equipped with a cassette or cartridge that carries out multiple tests restrains the growth to a certain extent. In order to address this challenge, the manufacturers are engaged in strategizing for effective reimbursement for multi-analyte POC tests.

Technological advancements in omics studies have encouraged research with regard to establishing the role of genomics, proteomics, and metabolomics in cardiovascular events. This, in turn, helps in the identification of novel biomarkers and assays to predict the risk of a heart attack before any symptom occurs.

Thus, most of the companies have targeted this biomarker, considering it as a key revenue-generating segment. The presence of a relatively high number of commercial POC devices that are based on testing of protein marker has contributed to the estimated share of proteomic testing.

Growing concern about mortality and morbidity rates due to Cardiovascular Diseases (CVD) has driven the demand for rapid, portable, and inexpensive biosensing devices for screening cardiovascular events. POC biosensors help in early diagnosis of heart failure without the need for hospital visits, eliminating the need for tedious and expensive laboratory tests.

In the past years, Microfluidic biosensors witnessed an increase in adoption rate as it allows integration and miniaturization of most functional protocols employed in central laboratories into a portable chip. Moreover, it offers several benefits such as less consumption of reagent/sample and rapid turnaround time.

As a result, in the past few years, POC applications of paper-based 3D microfluidics have increased considerably owing to their efficiency in liquid manipulation at a high level. These factors have led to the largest revenue share of microfluidic technology. Growing advances in this technique are expected to drive the segment in the coming years.

In outpatient clinics, the healthcare personnel’s are seeking substitution of curative medicines with predictive disease testing for chances of having heart failure. Outpatient clinics are employing POC devices at a major scale for timely diagnosis to make informed decisions for the treatment of heart failure. This, in turn, has led to the dominance of clinics over other end-use settings. 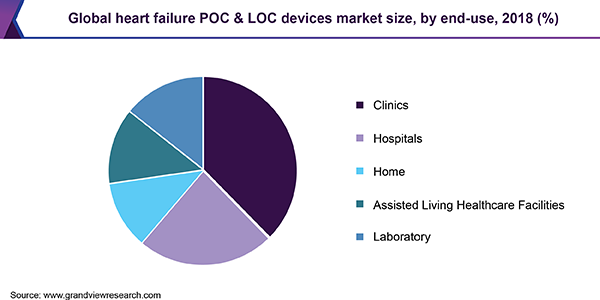 Furthermore, introduction of products like Minicare I-20 by Philips as a simple and easy-to-use device for non-laboratory ‏staff is driving the adoption of products for tests within home settings. Self-testing at home supports timely clinic visits and improves outpatient care, thereby driving the segment with a lucrative CAGR.

With presence of major market participants in the U.S. that are contributing to substantial organic revenue growth in the global heart failure POC & LOC devices market, North America dominated the revenue share in 2018. On the other hand, demand for diagnostic services continues to increase in Asian countries.

This is due to a shift in focus from infectious to chronic diseases like acute coronary syndrome, myocardial infarction, and cardiac ischemia. In addition, owing to rising standards of medical practice and developing state-of-the-art infrastructure, Asian countries are becoming a preferred choice for several global diagnostic companies to expand their business operations.

For example, Illinois-based Abbott Laboratories gains one-third of its worldwide revenues from Asia. Furthermore, global companies are collaborating with state and global government bodies to expand their market access in countries with the lowest market penetration.

For instance, in February 2019, ROYAL Philips collaborated with Saudi Arabia’s Ministry of Health (MOH) to offer integrated Cardiovascular Information System (CVIS) throughout the country. CVIS would enable the availability of medical information of any patient on demand in each one of the connected hospitals. This initiative was undertaken to improve cardiology care in the country

The rising funding into the management of CVD has triggered significant investments in the development of product portfolio for heart failure testing in point of care settings. Moreover, the growing interest of end-users in the implementation of POC cardiac marker testing in clinics has also prompted the key developers to expand their product portfolio.

Some key diagnostic developers that have marked their dominance in this market are Abbott, Danahar, Siemens Healthineers, and F. Hoffmann-La Roche Ltd. Other emerging players such as Quidel Corporation, bioMérieux S.A, Trinity BiotechInstrumentation Laboratory, and Abaxis, Inc are anticipated to boost revenue generation by the growing consumer awareness in home testing for risk of developing cardiovascular events.

These companies are engaged in development of disposable and low-cost laboratory-on-a-chip assays that cover testing of multiple cardiac biomarkers such as troponin I, CK-MB, BNP, Pro-BNP, D-Dimer, and myoglobin from a single specimen. In addition, key players are engaged in collaborating with other players to receive exclusive rights for selling and distribution of POC devices across the globe to enhance their market presence.

This report forecasts revenue growth at country levels and provides an analysis of the industry trends in each of the sub-segments from 2014 to 2025. For the purpose of this study, Grand View Research has segmented the global Heart Failure POC & LOC Devices market report on the basis of test type, technology, end-use, and regional: