The global industrial gases market size was valued at USD 92.0 billion in 2020 and is expected to expand at a compound annual growth rate (CAGR) of 6.0% from 2021 to 2028. The growth of the market is primarily attributed to the growing manufacturing industry in the developing economies of Asia Pacific. Moreover, increasing industrialization and urbanization, coupled with the increasing application of industrial gases in various industries, such as healthcare, metals and mining, and food and beverages, are expected to influence the market growth in coming years. Electronic applications of industrial gas are witnessing strong growth on account of the high demand for flat panel displays, semiconductors, and printed electronics. 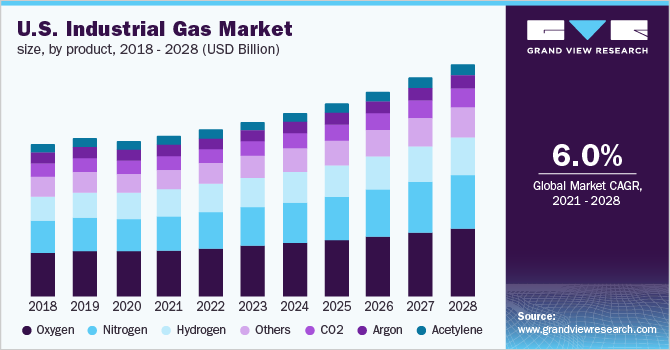 The use of industrial gas in the electronics (photovoltaic) industry for the manufacturing of semiconductors, solar, displays, LED solid-state lighting, wafers, and polysilicon compel the growth prospects for this market. Clean energy, predominantly solar PV, is evolving as an eminent source of clean energy generation, thus attracting investments globally. These gases substantially reduce the manufacturing costs, which is poised to increase their implementation over the forecast period.

Industrial production has been growing globally and is expected to grow further. There is an ever-growing demand in the aerospace and metal and mining industries, wherein various industrial gases are used on large scale. In addition, significant growth of the food and beverage and pharmaceutical industries in North America, Europe, and Asia Pacific is generating abundant opportunities for market growth.

Oxygen held the largest revenue share of 28.1% in 2020. It is known to improve the thermal efficiency of fuel. Oxygen is used to treat polluted water and hazardous wastes and for the gasification process of coal. The gas can also replace chlorine in the pulp and paper industry in order to reduce pollution. Oxygen also finds large applications in the medical industry. Thus, the large-scale application of oxygen in various industries is expected to propel the demand for industrial oxygen in the coming years.

Nitrogen gas held the second-largest revenue share in 2020 and is projected to expand at the highest growth rate from 2021 to 2028. Nitrogen gas is used on a large scale in the healthcare sector due to the growing medical and pharmaceutical industry in Asia Pacific and North America. This is expected to propel the growth of the segment in the coming years.

The cylinder (merchant) segment held the largest revenue share of 36.9% in 2020. The segment includes the gases being distributed in the form of packaged cylinders (high-pressure gas or low-pressure liquid). This form of distribution is however only conducive for customers with a small requirement of industrial gasses. For cylinder distribution, gases such as nitrogen, oxygen, argon, helium, and hydrogen can be conveniently compressed into a cylinder at pressures of up to 300 bars. Many gases are also supplied at room temperature in the liquid state.

The on-site segment is expected to witness the fastest growth over the forecast period. The on-site segment includes the filing station being set up either at the company plant or on another site. This mode of distribution is used for supplying large quantities of gases at varying pressures and states. On-site generation abolishes several problems linked to the conveyance and distribution of hydrogen, and therefore the market is expected to grow substantially. On-site hydrogen generation in small-scale industries has gained more popularity owing to new technologies being offered at affordable costs in comparison to delivered distributed channels.

The manufacturing application segment accounted for the largest revenue share of 26.2% in 2020 and is projected to witness significant growth during the forecast period. The demand for industrial gases, such as nitrogen, oxygen, carbon dioxide, and hydrogen, in the manufacturing industry, is projected to witness substantial growth in the developing economies owing to the growing manufacturing industry in India, China, Brazil, and South Korea. The growing demand for advanced industrial gases in the electronic industry is expected to further propel the growth of this segment.

The healthcare application segment is expected to witness the fastest growth over the forecast period. In addition, the ongoing COVID-19 pandemic has further driven the demand for medical-grade industrial gases, especially oxygen. An increase in global healthcare spending is creating a strong growth potential for this market. 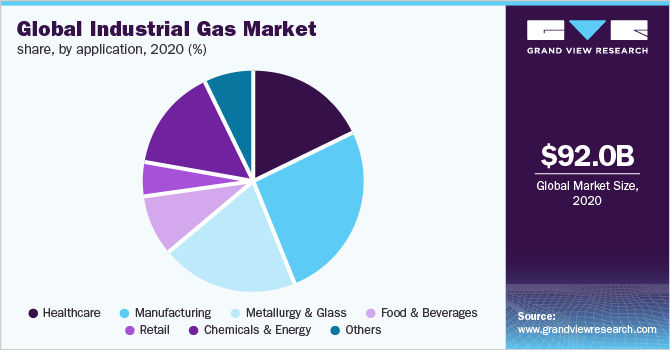 Industrial gases are used for a wide range of applications in the food and beverage industry. In the food industry, industrial gases are employed for numerous applications, including modified atmospheric packaging (MAP), chilling and freezing, and controlling the temperature of products during transportation and storage. It is majorly used to maintain the quality and increase the shelf life of food products. In addition, it is used as an indicator in the detection of food quality during processing and storage. Carbon dioxide is used in the beverage industry in the production of carbonated beverages. Food-grade liquid carbon dioxide is a key ingredient in carbonated drinks, which helps prevent mold growth and inhibits the growth of bacteria depending upon the concentration of carbonation.

Asia Pacific accounted for the largest revenue share of 36.1% in 2020 and is projected to expand at the highest CAGR during the forecast period. The increasing demand for industrial gases in the Asia Pacific can be attributed to the growth and expansion of the end-use industries in China, India, South Korea, and Japan. These countries are the key markets for industrial gases both globally and in Asia Pacific.

China emerged as the largest country-level market in 2020. Asia Pacific observed the maximum demand for industrial gases owing to the upsurge in demand in the aerospace industry for high-quality gas solutions. Additionally, significant growth of the food and beverage and pharmaceutical industries in the emergent economies, such as India and China, is expected to generate abundant opportunities for market growth during the forecast period.

In 2020, the U.S. accounted for the largest revenue share in the North American market and is projected to register the highest CAGR over the forecast period. The growing healthcare and electronic industries across the region are likely to promote the growth of the North American market. Moreover, the expansion of the industrial sector in the region is anticipated to fuel market growth.

The competitive nature of the global market is attributed to the presence of numerous well-established entities who control the majority of the shares in various sectors of the industrial gases value chain and have multiple channels for manufacturing and distribution of their finished products globally.

The high transport costs create benefits of customer density and mitigate rivalry. The industry players compete by factors such as price, brand image, quality, technology, and distribution network. The local companies supply to the multinational companies apart from their sales in the domestic market in order to achieve economies of scale. The presence of a large number of players in the market has resulted in tough competition. New and multifunctional product developments, superior quality, and efficient pricing are the only strategies companies can adapt to survive in this highly competitive global market. The industry rivalry is medium to high. Some prominent players in the global industrial gases market include:

This report forecasts revenue and volume growth at the global, regional, and country levels and provides an analysis of the latest industry trends and opportunities in each of the sub-segments from 2016 to 2028. For the purpose of this study, Grand View Research has segmented the global industrial gases market report based on the product, application, distribution, and region:

How big is the industrial gases market?

What is the industrial gases market growth?

Which segment accounted for the largest industrial gases market share?

b. Healthcare applications captured a market share of nearly 18.0% in 2019 owing to high demand from developing countries in the medical and pharmaceutical sectors.

Who are the key players in the industrial gases market?

What are the factors driving the industrial gases market?

COVID-19 will have a significant impact on the production of industrial gases due to disruption in supply chain and manufacturing. Similarly, a dip in manufacturing will negatively impact the demand for welding gases. The updated report will account for COVID-19 as a key market contributor.