The global insect protein market size was valued at USD 249.9 million in 2020 and is expected to expand at a compound annual growth rate (CAGR) of 27.4% from 2021 to 2028. The growing consumer awareness regarding the consumption of nutritional food products and increasing preference for a healthy lifestyle are expected to drive the demand for insect protein over the forecast period. The growing health consciousness among consumers across the globe has increased the demand for healthy and nutritious food products, thus providing opportunities for manufacturers in various industries to offer such food products. 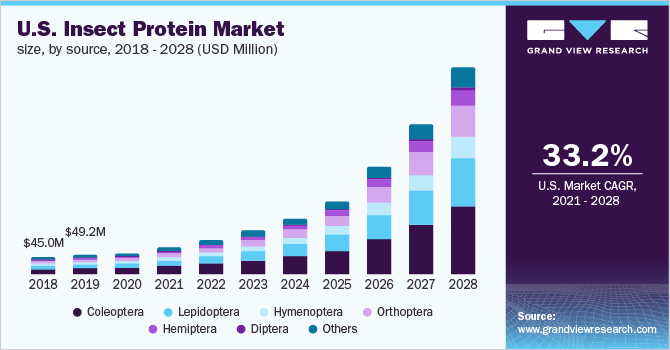 Insect protein holds high potential in combating world hunger as the demand for food products increases along with the growing population. Insect protein has a wide range of applications including animal feed production, food and beverage products, cosmetics, and personal care products. In addition, with the growing threats to global food scarcity, insects are being considered as a new source of human food and animal feed in western countries.

The U.S. accounted for the largest revenue share in the North American market in 2020 owing to the high awareness level among consumers and the presence of health-conscious consumers. Moreover, in the U.S., more than half of the population suffers from one or more preventable chronic diseases, many of which are derived from poor quality eating patterns and physical inactivity. This is increasing the demand for healthy and nutritious food products across the country.

In addition, consumers nowadays focus on the food ingredients and how their food is produced and sourced from and are willing to pay a premium price for natural products. Increasing spending on functional food products, a growing number of sports and gym enthusiasts, and consumers looking for healthy and sustainable food options are some of the key reasons expected to augment the market growth over the forecast period.

The outbreak pandemic disrupted the supply chain in different regions including North America and European countries such as the U.S., the U.K., France, and Germany are the leading markets for insect protein products. Insect protein saw a slow growth during the pandemic and is expected to recover post-pandemic due to the growing awareness and health consciousness among consumers.

Coleoptera dominated the market and held a revenue share of over 30.0% in 2020. The segment includes edible beetles, aquatic beetles, wood-boring larvae, and dung beetles. Coleoptera is fit for human consumption and is offered in various insect-based products including insect-based oil, protein powder, flour, and others. Orthoptera is expected to emerge as the fastest-growing source segment with a revenue-based CAGR of 31.2% over the forecast period.

The orthoptera segment includes insects such as locusts, grasshoppers, and crickets that are widely available, easy to breed, and have high protein content. Lepidoptera is one of the prominent sources of insects used for producing insect protein and covers insects such as caterpillars, butterflies, and moths. The growing awareness, increasing demand for nutritional products, and ease of breeding insects are anticipated to fuel the segment growth.

Animal nutrition accounted for the largest revenue share of over 75.0% in 2020. Insect protein is primarily consumed as a feed additive for poultry, aquaculture, and other animals. High digestibility band amino acid and protein content ranging from 40% to 70% are gaining traction from animal feed manufacturers. Segments such as pet food and aquaculture will be the profitable segments for manufacturers in animal nutrition. The food and beverages application segment emerged as the second-largest application segment in 2020 and is expected to witness considerable growth over the forecast period. 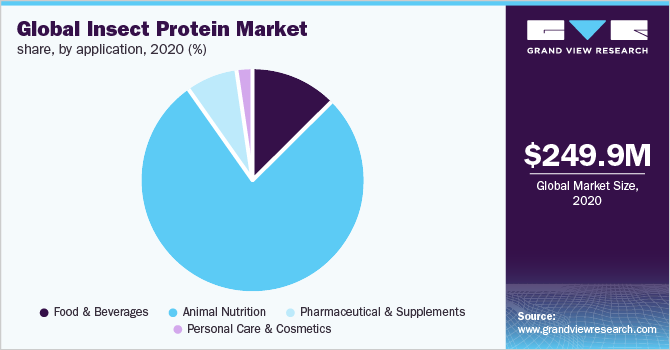 Functional food products, nutritional bars, and protein-rich products are some of the products for application in the food and beverage industry. Many countries authorizing insects for human consumption are expected to fuel the market growth. In the personal care and cosmetics industry, insect protein is widely used for skincare applications as an alternative source of fats. In recent years, the cosmetic industry has been challenged to use more natural and sustainable raw materials due to the rising environmental issues that also determine the growth of the product.

North America accounted for a significant revenue share in 2020. The market is expected to be the largest market by 2028 owing to the demand for nutritional food products and growing awareness among the consumers regarding the consumption of insect-based products. Mexico and Canada have vast potential for growth for new players and new product launches, which is expected to drive the demand for insect protein over the forecast period.

The Asia Pacific region is expected to expand at a revenue-based CAGR of 29.05% over the forecast period owing to the growing consumer base in the countries, including India, China, and Thailand. Moreover, countries such as Thailand and Indonesia have a long history of insect consumption and are among the large producers of insects adding raw material. In addition,the presence of developing countries is anticipated to drive the demand for nutritional food products over the forecast period.

The market is highly competitive with the small and medium level players focusing on innovation, increasing production capacities, and research & development of products. For instance, in November 2020, Innova Feed announced a collaboration with Archer Daniels Midland Company, one of the key players in agribusiness. The collaboration was made to expand its insect protein business by constructing a new site in Illinois, the U.S. that will have a target capacity of 60,000 tons of insect protein per year. Some prominent players in the global insect protein market include:

This report forecasts revenue and volume growth at the global, regional, and country levels and provides an analysis of the latest industry trends and opportunities in each of the sub-segments from 2017 to 2028. For the purpose of this study, Grand View Research has segmented the global insect protein market report on the basis of source, application, and region:

How big is the insect protein market?

What is the insect protein market growth?

Which segment accounted for the largest insect protein market share?

b. Animal nutrition accounted for the highest share of 77.7% in the insect protein market in 2020, with tthe growing acceptance for sustainable and more natural sources of feed additives are gaining traction with the growing concerns for animal welfare and health.

Who are the key players in insect protein market?

What are the factors driving the insect protein market?

b. The growing consumer awareness on the consumption of nutritional food products and preference for a healthy lifestyle is expected to drive the demand for insect protein over the forecast period