The global IoT microcontroller market size was valued at USD 4.69 billion in 2021 and is expected to expand at a compound annual growth rate (CAGR) of 12.7% from 2022 to 2030. The increasing number of IoT connections among consumer and enterprise sectors and the need for low-power, high-performance, and energy-efficient connected products are some of the primary factors to drive the market growth. Also, a growing preference for embedded Non-Volatile Memory (eNVM) solutions over System-in-Package (SiP) in high-end applications such as industrial automation, smart utilities, and smart transportation is expected to bode well for the IoT microcontroller market growth over the next coming years. However, the lack of industry standards, optimization, and data security of IoT-connected devices are expected to hamper the market growth over the forecast period. 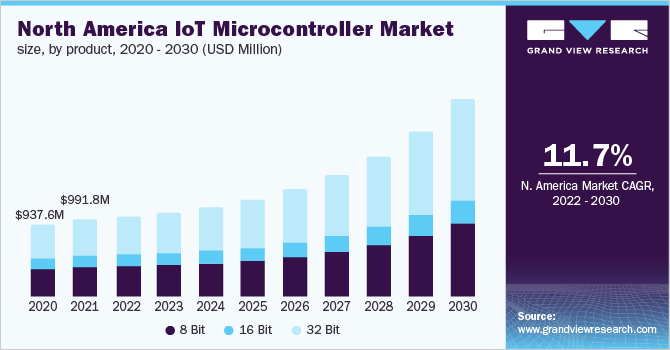 The global slowdown in the automotive industry witnessed in 2018 and 2019 had a negligible impact on overall MCU sales. Although the overall MCU market witnessed an upward trend in 2018, the average selling prices of MCUs continue till H2/2020. On the other hand, the outbreak of the COVID-19 pandemic took a severe toll on the semiconductor manufacturing industry. Economies worldwide implemented stringent measures to arrest the spread of novel coronavirus.

The measures include strict lockdowns and sealing of international borders for trade disrupting the supply chain. Furthermore, enterprises compelled employees to work remotely, as a result of which, the market experienced a sudden increase in demand for IoT-enabled smart devices, wearables, home computers, and mobile phones. MCUs manufacturers witnessed several challenges to balance the supply and demand. Several production facilities were suspended temporarily, and the international borders remained closed for trade.

As a result, the industrial sector is currently confronting a looming shortage of semiconductors and several components, including microcontrollers and microprocessors. Although the restrictions have been relaxed in several parts of the world and trade activities are resumed, the shortage of semiconductors is expected to continue till 2023. The average selling prices of MCUs are also likely to remain affected till Q4/2023. As such, the fluctuating selling prices of MCUs and the shortages of components, which are turning out to be one of the major bottlenecks for OEMs, device manufacturers, and automakers, are expected to restrain the growth of the market.

The outbreak of the COVID-19 pandemic has mainly triggered the level of healthcare awareness among people. As such, the demand for wearables capable of monitoring and tracking various health parameters, such as oxygen level, and heart rate, among others, has been significantly growing. Increasing concerns over maintaining health and hygiene, the rising popularity of fitness apps, and subsequently, the growing awareness about physical fitness and wearable devices, especially in countries such as Poland, China, the U.K., Germany, and India, are typically driving the adoption of wearable technology, the trend is poised to continue over the forecast period. All these factors, which bode well for the growing adoption of wearables, are expected to drive the growth of the market.

Based on product, the IoT microcontroller market has been categorized into 8 bit, 16 bit, and 32 bit. The 32 Bit MCU segment dominated the market in 2021 and is anticipated to register the highest CAGR of 13.6% from 2022 to 2030. The 32 bit is the most compatible MCU for IoT applications. It processes multiple peripherals efficiently and is extensively used in industrial applications such as factory automation and building automation and is also available at affordable prices.

The 8 Bit MCUs segment is anticipated to expand at a CAGR exceeding 12% over the forecast period. The 8-bit segment is extensively used for low-power applications such as smart wearables and connected devices. The growing preference for fitness wearables, particularly among millennials, is expected to drive the adoption of wearables. Lifestyle disorders, such as obesity, prompt individuals to pursue various fitness-related activities and monitor their performance using wearables, which is expected to bode well for the market growth over the next few years.

Based on application, the market is categorized into industrial automation, smart homes, consumer electronics, and others. The smart homes segment was valued at USD 1.04 billion in 2021, registering a CAGR exceeding 14% over the forecast period. The smart home segment is inclusive of home appliances. Advancements in app-controlled (notably mobile app) smart devices create the need for safe, secured, and energy-efficient applications such as HVAC and energy management, lighting, and infotainment applications, a trend which is expected to support the market growth for the smart home segment over the next few years. 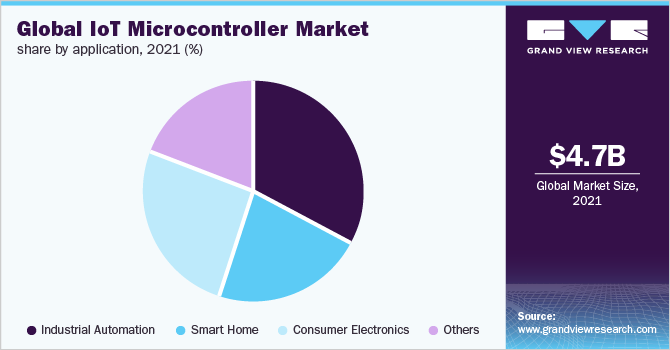 The consumer electronics segment encompasses smartphones, wearables, and others. The COVID-19 outbreak compelled the employees to work remotely. This has further triggered the demand for smart wearables such as smartwatches and fitness trackers. Increasing fitness and health awareness among millennials is also likely to spur wearables sales, which is expected to continue over the next few years. Therefore, the adoption of low-power MCUs coupled with short-range wireless connectivity, notably 8 bit integrated with Bluetooth/KNX/Zigbee/Wi-Fi-based protocols, is expected to drive the IoT MCUs sales over the forecast period.

Asia Pacific dominated the market and is anticipated to expand at a CAGR exceeding 13.0% over the forecast period. The growth is primarily driven by China, India, and Japan which accounted for more than 50% of the overall market share. This can be ascribed to increasing demand for smart wearables and favorable government spending to promote smart cities initiatives. The recent Regional Comprehensive Economic Partnership (RCEP) trade agreement with China and ASEAN countries coupled with the increase in disposable income among emerging economies such as Vietnam, Malaysia, and Indonesia are expected to create affordable smart home devices among the consumers, which will eventually drive the market growth over the forecast period.

The Europe regional market accounted for a revenue share of over 20% in 2021. In Europe, more than 50% of the electricity meters have been replaced by smart meters as part of the aggressive investments in grid modernization. Favorable government investments have particularly propelled the installation of smart meters across European countries, such as France, Spain, and the U.K., which supports the market growth over the forecast period. All these factors are expected to open opportunities for market players to augment profitability and hence bode well for the growth of the market for IoT microcontrollers over the forecast period.

The IoT MCU market is a competitive market characterized by incumbents and a few small-scale manufacturers. Leading market players are investing aggressively in R&D initiatives to introduce innovative, low-power, and energy-efficient MCUs and foray into different application segments as part of their efforts to retain their existing customers while attracting new ones. MCU manufacturers are also pursuing inorganic growth strategies to gain a competitive edge, such as strategic partnerships and Mergers & Acquisitions (M & A).

Besides M&A, OEM emphasizes research and development to develop energy-efficient MCUs for low power applications. Companies are also focused on developing products that comply with regional regulation norms to eliminate the risk of losing business because of regulation violations. For instance, in May 2020, NXP Semiconductor collaborated with OKdo, one of the business units of Electrocomponents Group, to develop E1, a single board computer (SBC). The SBC includes NXP's LPC55S69 Microcontroller, offers a high-performance, secure low-cost platform for IoT applications, and helps the company enhance its customer base. Some of the prominent players operating in the global IoT microcontroller market are:

The report forecasts revenue growth at the global, regional, and country levels and provides an analysis of the latest trends in each of the sub-segments from 2018 to 2030. For this study, Grand View Research has segmented the global IoT microcontroller market report based on product, application, and region:

How big is the IoT microcontroller market?

What is the IoT microcontroller market growth?

Which segment accounted for the largest IoT microcontroller market share?

b. The Asia Pacific dominated the IoT microcontroller market with a share of over 40% in 2021. This is attributable to the proliferation of connected devices and the presence of several key manufacturers pioneering the manufacture of MCUs supporting IoT devices.

Who are the key players in IoT microcontroller market?

What are the factors driving the IoT microcontroller market?