The global lithium market size was valued at USD 2.7 billion in 2020 and is expected to expand at a compound annual growth rate (CAGR) of 14.8% from 2021 to 2028. Electrification of vehicles is projected to attract a significant volume of lithium-ion batteries, thus anticipated to drive the market over the forecast period. The automotive application segment is expected to witness substantial growth over the forecast period, driven by stringent regulations for ICE automakers imposed by government bodies to reduce carbon dioxide emissions from vehicles. This has shifted the interest of automakers toward producing EVs, which is anticipated to benefit the demand for lithium and related products. Government subsidies for EVs, along with investments in this space, are likely to act as an additional booster to the growth of the market. 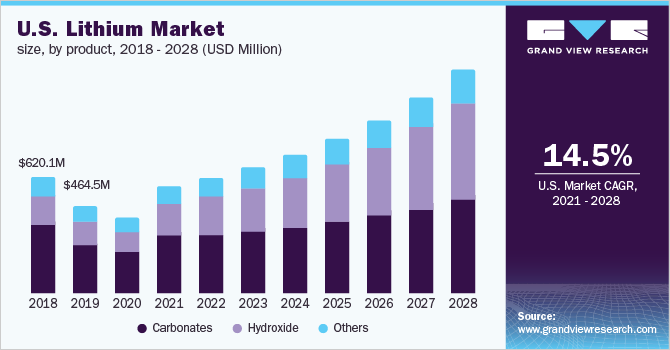 The U.S. holds major significance in battery production after China, which makes it one of the key lithium-consuming countries in the world. The country has huge reserves of lithium. According to the USGS, lithium resources from brines and minerals account for 7.9 million tons in the U.S., as of 2020. However, the country mines only about 1.0% of lithium used in the world.

In 2020, lithium production took place at only one location in the U.S., which is a brine operation in Nevada. However, the country is expected to boost its mining capabilities in the industry over the coming years. The market players in the U.S. are focusing on getting a hold on the battery supply chain owing to the increasing production of EVs in the country and transportation of batteries is dangerous.

In 2018, the Interior Department listed lithium as a critical mineral, which paced up the mine permitting process. In January 2021, the bureau of land management approved the Thacker Pass Mine proposed by Lithium Nevada Corporation. The mine is believed to serve as the largest source of lithium supply in the U.S. and is expected to be able to produce about 60 kilotons of battery-grade lithium carbonate by 2026.

The carbonate product segment dominated the market and accounted for the largest share of over 58.0% in 2020, in terms of volume. Lithium carbonate (Li2CO3) is the most stable inorganic compound and is used in forming other compounds, such as Lithium Hydroxide (LiOH) and even pure metal. Lithium associated with carbonates forms salts and is also used in the treatment of bipolar disorder. This compound is also used in lithium-ion batteries and has several applications in the construction sector for waterproofing slurries and as adhesives.

LiOH is a white hygroscopic crystalline material and an inorganic compound mostly used by lithium-ion battery manufacturers; it is commercially available as anhydrous and monohydrate. It has usage in transportation applications in the manufacturing of submarines and spacecraft. In addition, rapid development in battery technologies is propelling the demand for LiOH, thus, driving the market.

Many automotive players are inclined to adopt LiOH for battery manufacturing, which is expected to benefit market growth positively. For instance, BMW Group signed an agreement with Ganfeng Lithium, a lithium extracting company in China, for supplying LiOH for battery cells owing to the rising penetration of EVs. Rising awareness toward eco-friendly vehicles is driving the demand for EVs on account of which, BMW has planned to introduce 25 electrified models with lithium-ion batteries.

The consumer goods segment dominated the market and accounted for the largest revenue share of 13.9% in 2020. The segment is projected to grow owing to increasing sales of electronic devices, such as mobile phones, laptops, cameras, portable radios, speakers, and mp3 players, which make use of lithium batteries. Characteristics such as lightweight, large energy storage, and small size are driving the demand for lithium batteries; thus, positively influencing the market growth.

Single-use, non-rechargeable lithium batteries are found in remote controllers, handheld games, cameras, and smoke detectors. Rechargeable lithium-polymer cells are used in cell phones, laptops, toys, digital cameras, small and large appliances, tablets e-readers, and power tools. These batteries are made from critical materials such as cobalt, graphite, and lithium and need to handle with safety and precautions. 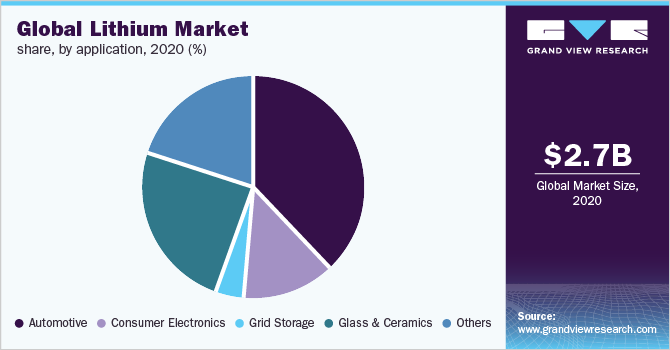 The developed countries worldwide are investing increasingly in the deployment of energy storage systems based on lithium-ion batteries; thus, fueling the growth of the lithium market. For instance, in June 2021, the U.K. launched a 50-megawatt energy system connected with the high-voltage transmission system of its National Grid. This project is a part of the USD 48.5 million Energy Superhub Oxford (ESO) plan of the country. The project is being led by Pivot Power and is backed by the Government of the U.K.

Asia Pacific dominated the market and held the largest volume share of 56.3% in 2020 owing to the rapidly developing automotive, glass, and consumer goods industries in countries such as China, Japan, South Korea, and India. The ongoing investments in the region to advance the battery technology sector is anticipated to drive the market over the forecast period.

To meet the plans and targets pertaining to EV and battery sectors, various countries in the region are witnessing developments in the lithium industry. In July 2020, Khanij Bidesh India Ltd. (KABIL), a joint venture between the NALCO, Mineral Exploration, and Hindustan Copper signed a start-up agreement with the Argentina-based Jujuy Energia y Mineria Sociedad del Estado (JEMSE) for the production and exploration of lithium. This agreement was in line with India’s efforts to establish a battery supply chain to meet the EV targets.

Europe accounted for the second-largest share of the market in 2020 and is projected to witness a volume-based CAGR of 6.8% from 2021 to 2028. The growth of the market in Europe can be attributed to the increasing production of EVs in the region. Europe surpassed China in terms of electric vehicle production and became the largest manufacturer of these vehicles in the world in 2020. The flourishing EV market in Europe has attracted foreign companies to invest in the region.

The market is consolidated in nature with production concentrated in the hands of a few key manufacturers. Albemarle, SQM, Livent Corporation, Orocobre Ltd., Ganfeng Lithium Co., Ltd., and Tianqi Lithium are amongst the key producers of lithium in the world. The manufacturers are mainly located in the Americas, Asia, and Australia. The market players compete against product quality, reliability in terms of supply and customer service, and diversity in the product portfolio.

Furthermore, the market players are investing in the battery sector, which is the key application of lithium. For instance, in June 2021, Albemarle announced about opening an Innovation Center at its site in Kings Mountain, North Carolina, U.S. The center will aid in supporting the company’s lithium carbonate and hydroxide, and advanced energy storage materials product portfolio. With this center, the company aims at achieving important cell-building capabilities to produce meaningful data for advanced battery material design. Some of the prominent players in the lithium market include:

This report forecasts revenue and volume growth at the global, regional, and country levels and provides an analysis of the latest industry trends in each of the sub-segments from 2017 to 2028. For the purpose of this study, Grand View Research has segmented the global lithium market report on the basis of product, application, and region:

How big is the lithium market?

What is the lithium market growth?

Which segment accounted for the largest lithium market share?

b. Based on region, Asia Pacific was the largest market with a revenue share of over 48% in 2020, owing to increasing investments in advanced battery technologies coupled with rising penetration of electric vehicles.

Who are the key players in lithium market?

What are the factors driving the lithium market?

b. Key factors that are driving the lithium market are the rising demand for lithium-ion batteries in electric vehicles and electronic products such as smartphones, laptops, portable speakers, and tablets.