The global malted wheat flour market size was valued at USD 35.89 billion in 2018 and is expected to grow at a compound annual growth rate (CAGR) of 5.5% from 2019 to 2025. An increase in consumption of bread and confectionery items is anticipated to propel the demand for malted wheat flour in the next seven years. Rising demand from emerging economies is anticipated to further fuel the growth. 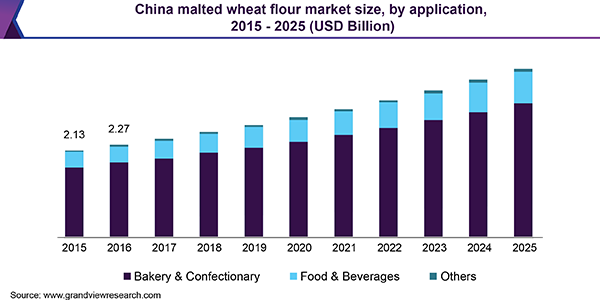 Malting increases the enzymatic activity of the source grain during the fermentation process necessary for bread-making. Hence, malted wheat flour is used as an enzyme controller for the production of bread. It increases the fermentation and results in a softer and fluffier dough as compared to whole wheat and reduced the production time. Rising awareness regarding the enzyme action of this flour is anticipated to increase its consumption in the production of other bakery products such as biscuits and cookies.

Based on the protein content of the wheat, it can be categorized into hard wheat and soft wheat. Soft wheat has low gluten content. As a result, it is ideal for preparing cakes and pastries. Moreover, malting the grain before it is milled helps enzymes convert starch to maltose which makes the source ingredient sweeter. This eliminates the need for artificial sweetening agents or sugar, making the end product comparatively more nutritious for consumption by reducing the calorie content imparted to it by sugars. This factor is anticipated to drive demand for the product in the confectionery industry, propelling the overall malted wheat flour market growth.

Malted wheat flour is witnessing an increasing application as an adjunct in the brewing industry. In major countries such as Germany, wheat beer is produced from extracts of malted wheat. This beer is popular for its characteristic bakery taste and flavor. Moreover, the use of flour lowers the pH value of the beer, enhancing its taste and clarity as it ages. This is expected to drive the demand for the product in the brewing industry, propelling the market growth in the next seven years.

However, due to the high gluten content in the source grain, the demand for malt wheat flour is anticipated to witness significant competition from gluten-free products. Due to high awareness regarding the side effects of gluten such as intestinal damage, the global population is shifting toward healthier products such as rye and barley that have no or less gluten. This is expected to significantly hamper the growth of the market during the forecast period.

Bakery and confectionery registered the maximum demand for malted wheat flour in 2018. The bread was the major bakery product to make use of this flour due to its sweet taste and humectant properties. Humectants are hygroscopic substances that help in keeping the food moist for a longer period of time. This property makes it ideal for bread-making as the end-product remains moist and fresh for a longer period of time. This segment is expected to maintain its dominance over the forecast period owing to an increase in demand for bakery products from major developing countries in the Asia Pacific and Central and South America.

The application of malted wheat in the food & beverage industry is anticipated to witness the fastest growth in the next seven years owing to the transformation in the brewing industry. Maltsters are making use of malted wheat flour along with malted barley to improve the taste of beer and increase the consumption of alcoholic beverages. Moreover, altering the composition of this flour along with malted barley results in various colored varieties of alcoholic beverages. Such transformations are expected to boost the consumption of alcoholic beverages, propelling the product demand in the brewing as well as the food industry.

Europe led the global malted wheat flour market owing to the presence of many global maltsters such as Bairds, Simpsons, and Warminster in U.K. Europe is the leading region owing to the huge consumption of alcoholic beverages in many countries. As the European population is shifting toward healthy food products, the application of malted wheat flour may become limited to brewed and distilled alcoholic beverages. This is expected to affect market growth in the projected period.

The Asia Pacific is expected to witness the fastest growth over the forecast period owing to an increase in demand for bakery and confectionery products. The government regulations related to bakery ingredients in this region are not as stringent as compared to Europe and North America. This is propelling the demand for bakery and confectionery products mainly in China, India, Japan, and Thailand. Moreover, these countries are also major producers of wheat, which will positively influence the production of malted wheat flour. 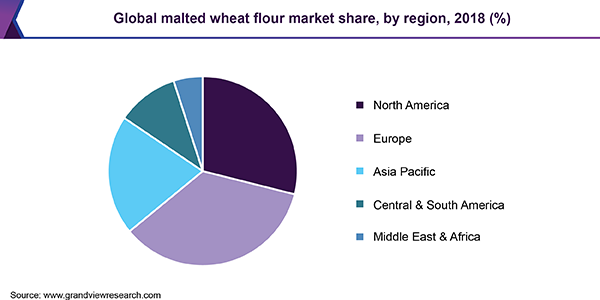 China is anticipated to be the largest consumer of beer over the forecast period due to an increase in demand for alcoholic beverages among the youth population, followed by South Korea and Japan. The alcoholic beverages industry is expected to witness significant growth in the Asia Pacific region, which is anticipated to increase the demand for malted ingredients and malt extracts of barley and wheat, propelling the demand for malted wheat flour.

Central and South America and the Middle East and Africa are anticipated to witness significant growth owing to major demand for bakery products from Brazil and South Africa. Brazil is also one of the significant producers of wheat which makes it ideal for maltsters to set up production facilities. Such initiatives are expected to create product awareness in these regions and drive the demand over the next seven years.

The global market is highly concentrated and with global players established in major regions such as Europe and North America. The manufacturers are focusing on local breweries and millers to increase product sales via contractual alliances. This is expected to positively influence the market growth owing to the inclusion of local players in the market. Moreover, the market may suffer due to the high bargaining power of suppliers as the producers of wheat are comparatively less in Europe and North America. Some of the prominent players in the malted wheat flour market include:

This report forecasts revenue growth at global, regional, and country levels and provides an analysis of the latest industry trends in each of the sub-segments from 2015 to 2025. For the purpose of this study, Grand View Research has segmented the global malted wheat flour market report on the basis of application and region:

How big is the malted wheat flour market?

What is the malted wheat flour market growth?

b. Europe dominated the malted wheat flour market with a share of 34.9% in 2019. This is attributable to the presence of many global maltsters such as Bairds, Simpsons, and Warminster in U.K as well as due to the huge consumption of alcoholic beverages across countries in Europe.

Who are the key players in malted wheat flour market?

What are the factors driving the malted wheat flour market?

b. Key factors that are driving the market growth include increasing consumption of bread and confectionery items and the rising demand from emerging economies.