The global meat extract market size was valued at USD 14.47 billion in 2020 and is expected to grow at a compound annual growth rate (CAGR) of 5.2% from 2021 to 2028. The market is anticipated to be driven by changing global diet trends, market developments, and R&D initiatives taken by major companies in the food sector leading to economic growth in the industry. Increasing consumption of a protein-rich diet and rising health consciousness is anticipated to drive the product demand over the next few years. In addition, the growing popularity of beef due to its various certifications, such as halal and kosher, will contribute to the market growth. According to the Organization for Economic Co-operation and Development (OECD), the total poultry and livestock production in the U.S. is expected to grow at a high rate with increased production of pork, beef, and broiler in 2019. 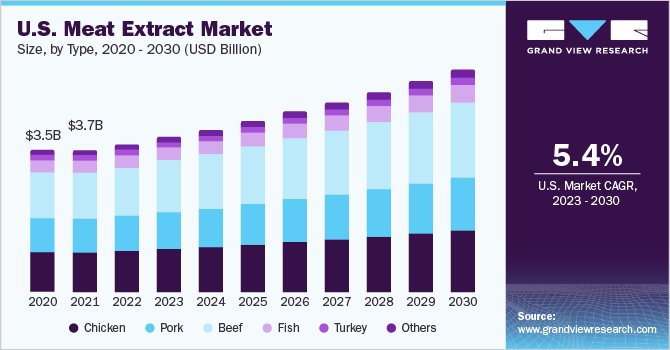 The country also accounted for some of the highest expansions in export volumes in 2019. This factor, in turn, is likely to augment the production of pork extracts tracing the growth of meat production in the country. As per the USDA Statistics, global per capita meat consumption is expected to rise at a decent rate by 2025. Processed meat manufacturers are coming up with new products and also adding new flavors to the existing range of products. Innovative launches, such as meat straws by Benny’s Original in different varieties like beef and pork straws, are expected to propel market growth.

As per the data published by the Food and Agriculture Organization (FAO), the total meat production in the world is expected to reach nearly 366 million tons by 2029. Of the total additional output, 76% will be predominantly contributed by the developing countries. Improved genetics, low feed costs, as well as growing demand for meat are anticipated to result in high production values. Subsequently, the market is expected to benefit from the rise in the production of meat over the forecast years.

Companies including Tillamook Country Smoker and Kerry Foods have come up with new branding methods and innovative products, such as cranberry & pineapple flavored turkey jerky and barbecue flavored meatballs. The novel product segments are expected to result in higher market penetration for the meat extract market over the forecast period.

The growing purchasing power of consumers will also support market growth. There is an increased shift from conventional meat to packaged meat products due to fast-tracked life in both developing as well as developed countries, resulting in an increased demand for meat extracts. Moreover, with the growing consumer awareness regarding the consumption of high-nutrition food, the demand for protein is increasing all over the world, thereby augmenting the market growth.

The estimates by Tyson Foods, Inc. suggest that the global consumption of protein increased from 257 billion tons in 2013 to 298 billion tons in 2020. The increasing number of consumers in the Asia Pacific region are opting for animal and animal products as a feasible source of protein. This is expected to propel the product demand over the forecast period.

In terms of volume, the chicken type segment led the market and accounted for a share of more than 42% in 2020. The increasing demand for poultry and poultry products due to the easy availability and affordable rates has contributed to the large volume share of the global chicken meat extracts market. Chicken has gained increased popularity among fitness-savvy consumers as it has high protein content compared to most other common meat products. The low cost of these products and their manufacturing has made chicken an effective choice for manufacturers and consumers.

Beef is the culinary name for meat obtained from bovine animals and is the second most-consumed meat after chicken. The demand for beef extracts is increasing as there is a high demand for fresh meat without equivalent supply caused by political and environmental factors. Other factors contributing to increased consumption of beef extracts are food safety issues including pathogen detection and chemical residues in other meats, such as poultry and pork.

The powder form led the market in 2020 with a revenue share of more than 52%. Meat extract powder is a potent and rich form of meat stock, which is obtained from chicken, beef, pork, and fish, and is used to make broth for soups and liquid-based foods. The product is insoluble in alcohol while being highly soluble in water and has a distinctly characterized aroma that gives food products the aroma of meaty flavor. The powdered products are rich in nutrients, such as organic acids, vitamins, minerals, nucleotides, polypeptides, amino acids, creatinine, and creatine. The segment is expected to show high growth prospects over the forecast period due to its increased use in food products as a flavor & nutrient enhancer.

In North America, especially in the U.S., the consumer demand for RTE soups is increasing with the products being an essential part of the American household. In addition, low substitution prospects are likely to result in stable product sales over the forecast period. The industry is anticipated to witness significant growth in demand for concentrates-based meat extracts and stock/broth due to various factors, such as decreasing average household size and increasing number of working individuals.

The industrial application segment dominated the global market in 2020 and accounted for a revenue share of over 80%. Meat extracts obtained from sources, such as pork, beef, lamb, fish, and chicken, are used for manufacturing various products including ready meals, snacks, sauces, soups, soup powders, seasonings, coatings, bouillon cubes, nuggets, and stock powder.

The consumption of instant food items, such as Ready-To-Eat (RTE) foods, is expected to witness high growth over the coming years due to the increasing number of working professionals globally.

Meat extracts in their distinguished form, such as powder, paste, and liquid, have shown potential as raw materials that can be used for artificially growing microorganisms, primarily for bacterial fermentation and culture. The manufacturers are producing their products from fresh meat by hydrolysis, autolysis, concentration, and separation among other high-tech microbiological refined soluble paste products for biopharmaceutical fermentation.

In addition, Quick Service Restaurants (QSRs) account for a major share in the commercial segment as numerous chain restaurants, such as McDonald’s and Taco Bell, have realized the time scarcity of the working population and are striving to provide timely delivery of food. As the concept of heavy breakfast has become extremely popular, the chain restaurants are increasingly including meat extracts in their breakfast menu, driving the market growth in the commercial application segment. 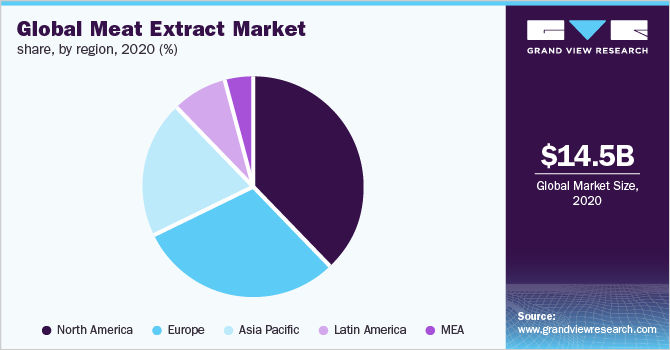 Product traceability is a major drift that exhibits the demand for meat extracts in North America. A rise in the demand for and consumption of canned foods, increasing population, and new technological improvements are some major factors anticipated to contribute to the regional market growth over the forecast period.

Factors, such as increasing demand for convenience food, changing lifestyles, and rise in consumer disposable income, are contributing to the market development in Europe. The consumption of beef extracts is expected to increase with the improving economic conditions and due to lower prices of these products.

Asia Pacific is expected to be the fastest-growing regional market over the forecast period owing to the rising consumption of processed and conventional chicken products in emerging countries, such as Japan, China, and India. Other factors driving the regional market include increasing economic growth, rising consumer preference for healthy food, and growing disposable income levels. Moreover, Asia Pacific is considered the largest consumer base for chicken powder. However, consumers are now increasingly shifting their preferences towards other variants, such as pork and fish meat extracts.

The companies market their products with customization services. The change in the type of product category, such as seafood, beef, and pork, coupled with the change in taste preference of consumers is likely to increase customization of the products. Moreover, local players cater to the local market providing highly customized products with a variety of recipes. Product convenience and its ease-of-use are also important factors in driving their popularity among consumers.

Most of the companies need to rely on a continuous and undisrupted flow of raw materials, such as raw meat. To maintain this flow, companies create various types of agreements, partnerships, and ventures with local suppliers, which ensures high-quality raw materials. These forms of strategic partnerships also assure a timely production schedule for producers. Top players in the industry can derive such strategic partnerships and agreements with local players/suppliers and ensure continuous product supply. Some of the prominent players in the global meat extract market include:

This report forecasts revenue and volume growth at the global, regional, and country levels and provides an analysis of the latest industry trends in each of the sub-segments from 2017 to 2028. For the purpose of this study, Grand View Research has segmented the global meat extract market report on the basis of type, form, application, and region:

How big is the meat extract market?

What is the meat extract market growth?

Which segment accounted for the largest meat extract market share?

b. Probiotics led the meat extract market and accounted for more than 52.2% share of the global revenue in 2019. Probiotics products exhibit a vital growth area within the functional ingredient group, and strong research efforts are underway to improve dairy products into which probiotic organisms such as Bifidobacterium and Lactobacillus species are integrated.

Who are the key players in the meat extract market?

What are the factors driving the meat extract market?