The global metal stamping market size was valued at USD 220.0 billion in 2019 and is anticipated to witness a CAGR of 2.8% in terms of revenue from 2020 to 2027. The growing consumer electronics industry is likely to remain a key driving factor on account of the application of metal frames in mobile phones, headphones, speakers, and game pads and controllers.

In mobile phones, metal stamping is used in manufacturing antennas, chassis, and camera lens holders as it offers high tolerance, corrosion resistance, electrical conductivity, and smooth finish. According to GSM Association, the global number of unique mobile subscribers is expected to reach 5.9 billion by 2025 from more than 5 billion in 2017, which in turn, is likely to propel the demand for mobile phones and eventually metal stamping over the coming years. 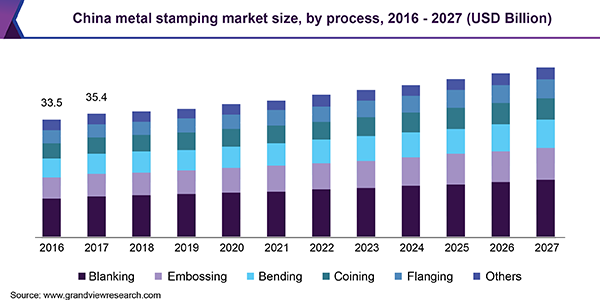 China was the largest consumer of metal stamping products in 2019 on account of the increasing production of vehicles and electronic components. The country’s automobile components industry is largely composed of joint ventures where the foreign companies accounted for about 70% of the revenue share in 2018.

In April 2018, a U.S. based automobile component manufacturer named American Axle and Manufacturing and a China based manufacturer Liuzhou Wuling Automobile Industry Co. Ltd., entered into a joint venture “Liuzhou AAM Automotive Driveline System Co. Ltd.”, in China to produce rear axles and drive heads. The joint venture aimed at meeting the growing demand for vans, mini vans, and sport utility vehicles in the country. The increasing production of auto components is anticipated to propel the growth of the market for metal stamping over the coming years.

According to the International Council on Clean Transportation (ICCT), the global electric vehicle production surpassed 2 million, out of which, China accounted for 51.6% in 2018. Government initiatives such as electric car subsidies to local manufacturers to support the growth of electric vehicles is a major factor responsible for the increase in production. This is likely to boost the usage of sheet metal during the production of auto components such as chassis, interior and exterior structural, and transmission components, which in turn, is expected to drive the market for metal stamping during the forecast period.

The accelerating market growth can be hindered as automobile manufacturers are replacing metals with plastic and carbon fiber as they assist in weight reduction of vehicles. A 10% reduction in weight of the vehicle results in a 5-7% increase in fuel efficiency. The increasing production of lightweight vehicles owing to the stringent government regulations in various countries is anticipated to drive the demand for substitute products. For instance, in U.S., developments in the Corporate Average Fuel Economy (CAFE) regulations to enhance fuel efficiency are encouraging the use of these substitute products in automobiles, which in turn is likely to hamper the market for metal stamping over the coming years.

Blanking is an integral part of manufacturing automobiles on account of its precise and superior stamping ability. The technique involves the use of a die to obtain the desired shape. The growing use of blanking in the automobile industry on account of its ability to cater to mass production lines is expected to augment segment growth over the coming years.

Embossing was the second largest segment in 2019 in the metal stamping market owing to its advantages such as the ability to produce different patterns and sizes, depending on the roll dies. This is done by passing a metal sheet or strip between rolls of the desired pattern. Embossing a sheet metal reduces friction, increases stiffness and rigidity, and enhances traction.

Bending process refers to pressuring a metal on to a plane surface to provide the desired shape. The bending process is cost-effective when used for low or medium quantities of metals. The bent parts are utilized in several applications such as wheels, door hinges, and the engine assembly in automobiles.

Coining is a cold working process that uses extreme force to plastically deform a metal workpiece such that it conforms to a die. A gear-driven press, a mechanical press, or a hydraulically actuated press are used in this process. It was earlier used in the minting of coins but with the growing complexity in the designing of automobiles, the coining process is now being used in metal stamping as well.

Automotive industry including passenger vehicles, light commercial vehicles (LCVs), heavy trucks, buses, and coaches use metal stamping parts in manufacturing body panels to maintain safety standards and control end-costs. According to the International Organization of Motor Vehicle Manufacturers, the global production of LCVs and heavy trucks increased by 5.9% and 3.5% respectively from 2017 to 2018. Increasing vehicle production is expected to foster the growth of the market for metal stamping in automotive applications over the coming years.

Industrial machinery segment is expected to witness significant growth over the coming years on account of growing industrialization in the developing and emerging economies such as India, China, Brazil, and South Africa. In the agricultural industry, metal stamping components are used to manufacture automated processing equipment. Metal stamping companies such as D&H industries are investing in R&D to provide advanced metal stamping technology for agricultural equipment. The developments in the agricultural industry are anticipated to boost market growth across the forecast period.

Asia Pacific accounted for the largest revenue share in 2019 owing to the increasing demand for cars and consumer electronics in the region and is expected to witness the highest growth rate over the forecast period. The growth is majorly driven by developing countries such as China, India, Bangladesh, Indonesia, and Pakistan, where the increasing demand for phones along with other consumer electronics is anticipated to augment the growth of the market for metal stamping over the coming years.

Growing industrialization coupled with infrastructure development and growth in the defense industry is expected to have a positive impact on the demand for machinery and equipment in Asia Pacific. Countries such as China and India are increasing their investments in the defense industry. For instance, China increased its defense budget by 7.5% in 2019 to upgrade the defense equipment, and launch advanced defense aircrafts. The rising demand for defense equipment is anticipated to drive the market for metal stamping over the coming years.

India is another lucrative market for metal stamping where the growing production of components is anticipated to positively influence market growth. Also, the on-going trade war between China and U.S. is likely to propel U.S. manufacturers to shift their production base in India in order to get themselves exempted from high export tariffs. For instance, in June 2019, Apple has asked its key manufacturing partners to explore options to shift 15-30% of its hardware production from China to India, South East Asia, or Vietnam.

In North America, product consumption is likely to be driven by rising demand from the automotive industry. Auto makers in the region are focusing on increasing the production of lightweight vehicles by using metals such as aluminum in various components to reduce fuel consumption. As of 2018, nearly 50% of the vehicles manufactured in the region consisted of aluminum hoods and this figure is anticipated to reach 80% by 2025. The increasing production of aluminum hoods is anticipated to drive the market for metal stamping over the coming years.

For instance, In May 2017, D&H Industries announced to add a new metal stamping and fabrication plant including larger tonnage presses of 300 tons and 400 tons mechanical presses, resistance welding, and assembly in Wisconsin, U.S.

This report forecasts revenue growth at global, regional, and country levels and provides an analysis of the latest industry trends in each of the sub-segments from 2016 to 2027. For the purpose of this study, Grand View Research has segmented the global metal stamping market report on the basis of process, application, and region:

How big is the metal stamping market?

What is the metal stamping market growth?

Which segment accounted for the largest metal stamping market share?

b. Asia Pacific dominated the metal stamping market with a share of 35% in 2019. This is attributable to developing countries such as China, India, Bangladesh, Indonesia, and Pakistan, where there is increasing demand for mobile phones along with other consumer electronics.

Who are the key players in metal stamping market?

What are the factors driving the metal stamping market?

b. Key factors that are driving the market growth include application of metal frames in mobile phones, headphones, speakers, and game pads and controllers.