The global microgrid market size was valued at USD 3.76 billion in 2016. Rising power demand in developing countries including Mexico, China, India, and Russia as a result of growth in household and industrial sectors is expected to be a driving force. A microgrid is a local electric system, which has the ability to provide power either in parallel or isolation from electric grids. Shifting inclination from remote central station power plants to more localized and distributed generation for enhanced reliability, resiliency, and energy in cities, communities and campuses is projected to have a substantial impact. 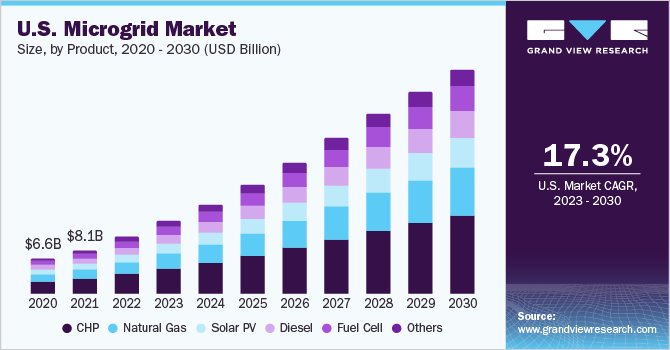 These electrical distribution services are used on account of providing enhanced local resiliency and improvement of operation and stability of the regional electric grid. Furthermore, the utilization of renewable resources for power generation is expected to upscale the requirements of a microgrid in the near future.

The rising importance of the captive power generation system in the manufacturing sector to reduce the reliance on electricity supply from the regional electric grid is expected to remain a key driving factor. Furthermore, growing awareness towards power generation through the usage of alternative renewable sources including the wind, solar, and hydrogen is projected to have a positive impact over the next eight years.

Over the past few years, population growth and urbanization in emerging markets including Mexico, China, and India have resulted in national governments for increasing the spending on infrastructure development. As a result, increasing construction expenditure in the abovementioned countries is expected to play a crucial role in promoting power demand and thus, in turn, will support microgrid market growth over the projected period.

Rising spending on the developments of new prototypes of smart microgrid through the implementation of Galvin Energy Initiative by The Galvin Project Inc. is expected to open new markets. Furthermore, the emergence of the U.S. and Canada as shale gas production destination on account of increased adoption of hydraulic fracturing technology is projected to ensure the access of power sources to buyers.

Combined heat & power (CHP) accounted for 37.5% of the global market share in 2016. Shifting preference from conventional separate heat and power system (SHP) to energy generation from single fuel is expected to have a substantial impact.

Fuel cell is expected to foresee volume growth at a CAGR of 25.1% from 2017 to 2025. The superior ability of fuel cells to operate at high temperatures along with negligible electrolytic loss is expected to promote the market scope in the near future.

Solar PV is projected to account for 19.5% of global volume by the end of 2025. Favorable support by developed countries including the U.S., Germany, the U.K., and Japan aimed to upscaling the power generation output from solar energy is expected to have a positive impact. Furthermore, technological advancement regarding the development of organic solar PV modules is expected to open new market opportunities over the next eight years.

Diesel-source grids market was valued at USD 15.1 million in 2016 and is projected to foresee moderate growth as a result of stringent regulations aimed at limiting the power generation from fossil fuels. However, the high adoption rate of diesel source of electricity generation in the manufacturing sectors of developed economies is expected to be a favorable factor.

The grid-connected products market was USD 2.17 billion in 2016. Gaining popularity of smart micro-grid connected PV system on account of supplying power provides electricity to consumers by reducing transmission losses is expected to have a substantial impact. Over the past few years, North Power Systems have been utilizing technology, which integrates their wind turbines with solar PV, diesel gensets, or other power sources of the microgrid. This hybrid technology has been used in grid projects located in Hawaii, Alaska, Bahamas, and Antarctica. Hybrid product forms are expected to account for 2.9% of global revenue size by the end of 2025.

Education dominated the market, accounting for 33.2% of the total volume share in 2016. Rising government spending toward the improvement of education infrastructure for ensuring school education in rural areas in developing countries including China India is expected to have a positive impact. 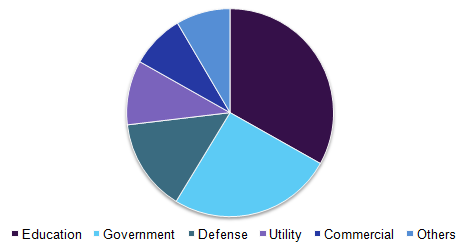 The commercial application is expected to witness volume growth at a CAGR of 18.3% from 2017 to 2025. Extensive requirements of power supply for ensuring lighting, heat ventilation air conditioning (HVAC), and operating electronic goods in hospitals, corporate offices, and retail outlets are projected to have a high impact.

North America accounted for 71.9% of global volume share in 2016. The high adoption rate of captive power generation methods in the industrial and municipal sectors of the U.S. for reducing the reliance on the government-controlled power supply is expected to have a substantial impact.

Asia Pacific is projected to witness revenue growth at a CAGR of 19.0% from 2017 to 2025. The positive outlook for manufacturing and construction sectors in the major markets including China and India owing to regulatory support for promoting investments on a domestic level is expected to be major driving factors.

Central & South America is projected to account for 2.5% of the global revenue share by the end of 2025. The firm foothold of mineral processing units of silver and copper in Peru and Chile on account of the abundance of mineral reserves is expected to expand the market size of power distribution systems over the next eight years.

In November 2016, ABB Ltd. and IIT Madras formed a strategic partnership for improving the performance of microgrid and its utilization for increasing electricity supply to remote areas. This initiative is projected to play a significant role in increasing the usage of the product in remote locations of India over the next eight years. The establishment of strategic partnerships with research institutes is expected to remain a key critical success factor over the next eight years.

This report forecasts revenue growth at global, regional & country levels and provides an analysis of the industry trends in each of the sub-segments from 2014 to 2025. For the purpose of this study, Grand View Research has segmented the microgrid market on the basis of power source, product, application, and region: