The global military personal protective equipment market size was valued at USD 13.47 billion in 2020 and is anticipated to grow at a compound annual growth rate (CAGR) of 7.8% from 2019 to 2028. Body armor, eye protection, tactical vests, advanced combat helmets, breathing devices, gloves, and footwear are examples of military PPE worn by soldiers during battle or training. Personal Protective Equipment (PPE) is designed to protect soldiers from biological, chemical, physical, and radioactive threats. The rising focus of defense agencies on troop safety and security, as well as higher military budgets, are expected to fuel market growth over the forecast period. Despite the COVID-19 pandemic, global military spending has increased significantly as compared to 2019. This can be attributed to the growing geopolitical instability, internal conflicts, border disputes, rising terrorism, and increased spending on NATO. Thus, increased military spending is likely to boost the product demand in the coming years. 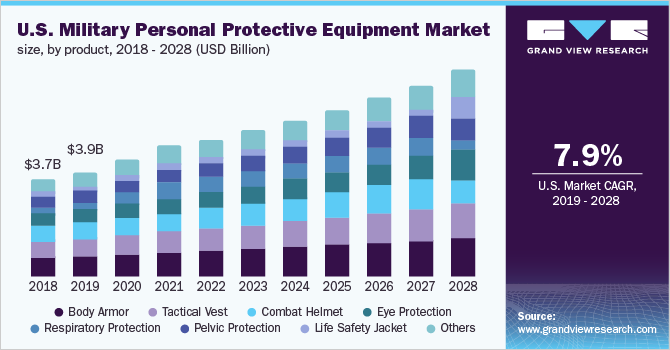 The COVID-19 pandemic has resulted in the increased adoption of Respiratory Protective Equipment (RPE) and PPE for eyes in the military to safeguard soldiers from coming in contact with the virus. RPE includes gas masks, filters, powered air respirators, and self-contained breathing equipment, among others. The growing demand for masks and eyewear is expected to boost market growth over the forecast period.

The U.S. is a major market for military PPE. In 2020, the U.S. was the world’s top country that spent around USD 778 billion on the military. The high spending in the U.S. is attributed to strong investments in R&D and modernization of equipment and nuclear arsenals The U.S Armed Forces are the world’s third-largest military force, and the country’s rising defense spending is expected to propel the product demand.

China’s increased military spending is attributed to the country’s economic prosperity and strong presence in the Indian Ocean region to execute its String of Pearls policy. The rising tensions between China and India along the Sino-India disputed border have resulted in a significant rise in military spending in both nations, thereby complementing the market growth.

The body armor product segment accounted for the largest share of 19.8% of the global market in 2020 as a result of the increased demand for ballistic protection equipment that offers protection in various hostile environments. The growth in asymmetric warfare in several countries, including the U.S, India, and China is expected to boost segment growth further.

The demand for PPE for eyes is estimated to witness growth at a CAGR of 7.5% over the forecast period. Eyewear offers protection to soldiers from potential injuries during training and combat. Military-grade eyewear also offers visibility enhancement, UV reduction, and ballistic protection from fragments & projectiles in a tactile environment.

A combat helmet is an essential piece, which is used to improve the impact and ballistic protection of soldiers. Combat helmets are being widely adopted by defense agencies to protect personnel from machine-gun bullets, IED blasts, and shrapnel that may cause severe head injuries. The segment is expected to be driven by the rising demand for lightweight helmets that reduce fatigue and tactical helmets.

The respiratory protection segment is estimated to register the fastest CAGR due to the high demand for RPE, which is attributed to the increasing threat of chemical, biological, and radiological warfare across the globe. Furthermore, the rising prevalence of COVID-19 resulted in boosting the demand for RPE, thereby driving the segment growth.

The army end-use segment led the market and accounted for 54.9% of the global revenue share in 2020. Various defense agencies in developed countries, such as the U.S., U.K., France, and Germany, prioritize the safety of ground troops and armed forces to upgrade conventional protective equipment, which is expected to drive market growth over the forecast period.

The increased importance of ground troops in operations in Iraq, Afghanistan, Syria, and Yemen has also fueled the market growth. The expansion of guerrilla tactics and Improvised Explosive Devices (IEDs) has increased the risk to ground forces in their operations, causing a significant need for army protective equipment. Furthermore, rising demand for lightweight and improved PPE by defense personals in both hostile and non-hostile circumstances is expected to drive the segment. 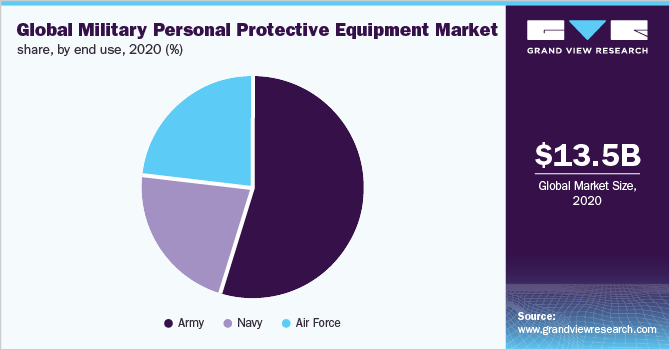 The navy end-use segment is estimated to register the second-fastest CAGR over the forecast period. The U.S. is spending heavily on Naval warships to assert its presence in the Persian Gulf and Indian Ocean region to counter Iran and China. China has increased its naval presence in the Indian Ocean region to arrest its presence and look after its commercial interests in the region. Many governments are investing heavily to improve their naval strength. These factors are likely to boost the product demand in the navy end-use segment over the forecast period.

The air force segment is likely to have a significant growth at a CAGR of 7.4% over the forecast period. Air force personnel are required to work in physically challenging conditions. The ongoing military operations in Afghanistan and other conflict areas have increased the importance of air support for evacuation and transporting soldiers, in turn, boosting the product demand in the air force end-use segment.

The market in Europe is expected to witness substantial growth over the forecast period due to the increased spending, which is attributed to the military upgradation in terms of aircraft procurement and weapons upgrades. European countries, such as Germany, France, and Italy, contribute a part of their defense spending on NATO, which is likely to boost the product demand over the forecast period.

The Middle East & Africa has witnessed significant terrorist activity in the past few years. The ongoing Yemen conflict and rise of far-right terrorism have posed security challenges in the region. This has led to increased government spending on the military in the region, in turn, boosting the demand for military PPE.

The market is highly competitive with the presence of both global and regional companies. To meet the increasing demand from end-users, key manufacturers are involved in constant research and development and the implementation of new designs to create products using innovative and high-quality materials. The industry is focusing on activities that will lead to the development of new technologies, such as the use of nanotechnology materials to create flexible and lightweight armors, which is one of the trends that will help in market expansion. Some prominent players in the global military personal protective equipment market include:

This report forecasts revenue growth at the global, regional, and country levels and provides an analysis of the latest industry trends in each of the sub-segments from 2017 to 2028. For the purpose of this study, Grand View Research has segmented the global military personal protective equipment market report on the basis of product, end-use, and region:

How big is the military personal protective equipment market?

b. The global military personal protective equipment market size was estimated at USD 13.47 billion in 2020 and is expected to reach USD 15.03 billion in 2021.

What is the military personal protective equipment market growth?

b. North America is the largest military personal protective equipment market and accounted for 36% of the total demand in 2020 owing to higher military spending in countries including U.S. and Canada in the region.

Who are the key players in the military personal protective equipment market?

What are the factors driving the military personal protective equipment market?

b. The key factors that are driving the military personal protective equipment market rising focus of defense agencies to ensure soldier survivability; and increased spending on military activities.