The global narrowband-IoT (NB-IoT) market size was valued at USD 578.0 million in 2018 and is expected to register a CAGR of 34.9% from 2019 to 2025. Narrowband-IoT (NBâ€‘IoT) is an emerging wireless IoT communication technology that can connect IoT devices over a wider area and in places that are difficult to access manually using limited bandwidth. The power-efficient NB-IoT modules help in ensuring a long battery life of approximately ten years as they consume minimal power for signal processing operations.

Encouraged by the rapidly-growing applications of NB-IoT technology, more and more technology companies and telecommunications service providers are expected to design and develop NB-IoT devices and roll out services, thereby driving the market growth over the forecast period. Advances in Artificial Intelligence (AI), Machine Learning (ML), and big data analytics would particularly enable companies to analyze the large volumes of data obtained from tracking and monitoring activities using IoT networks. As such, the rising adoption of IoT and connected devices as well as AI, ML, and big data analytics across industrial and commercial applications are also expected to contribute toward the growth of the market. 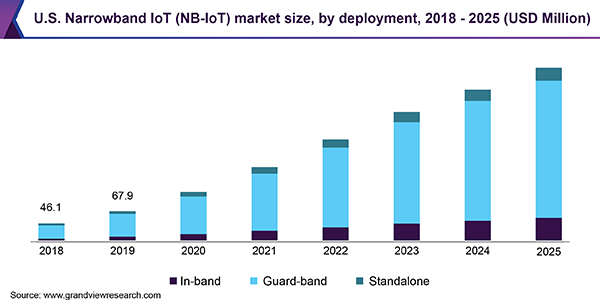 3rd Generation Partnership Project (3GPP), a standards organization developing communication protocols for mobile telephony, standardized the NB-IoT technology in 2016. Since then, it has emerged as one of the major 3GPP IoT technologies and is poised to become a dominant LPWA technology. Although the technology is suitable primarily for static assets, it is anticipated to play a vital role in tracking roaming assets as well owing to rapid growth in NB-IoT network coverage. Moreover, the capability of the NB-IoT network to penetrate deep underground and enclosed spaces would also enable underground and indoor deployment of IoT devices.

Telecom service providers happen to be an integral component of the NB-IoT ecosystem as they are responsible for providing network connectivity required for the IoT devices installed, either in standalone, in-band, or guard-band modes, as part of the networks. According to the Global Mobile Suppliers Association, as of April 2019, there were approximately 124 deployed NB-IoT/LTE-M networks operated by 104 operators worldwide.

However, the looming lack of standardized and cost-effective network pricing models and adequate network coverage to support the massive widespread IoT deployments is restraining the market growth. Although the overall module and service costs of NB-IoT solutions have been plummeting over the past two years in line with the aggressive investments in research and development activities and production of modules, the prices remain a major concern for high-volume IoT deployments.

Based on the component, the market has been further segmented into network and module. The network segment dominated the market in 2018 owing to the high service costs and increasing number of IoT deployments. However, the module segment is anticipated to emerge as the fastest-growing segment over the forecast period owing to the growing demand for NB-IoT modules for consumer-oriented applications as well as industrial applications. The increasing demand for consumer wearables, smart parking solutions, smart security and surveillance solutions, smart metering solutions, and smart agriculture solutions is particularly anticipated to increase the demand for NB-IoT modules over the forecast period.

NB-IoT can co-exist with the existing 2G, 3G, and 4G mobile networks and is hence supported by all major chipset, module, and mobile equipment manufacturers. Moreover, government agencies and public safety organizations are deploying NB-IoT networks for smart city infrastructure projects to ensure the safety and security of people and public assets.

Based on deployment, the market has been further segmented into in-band, guard-band, and standalone modes. The guard-band segment dominated the market in 2018 and is also anticipated to emerge as the fastest-growing segment over the forecast period. The capability to use the existing cellular infrastructure, including antenna and Radio Frequency (RF) modules, without having to add any additional spectrum cost would serve as the major factor driving the growth of the guard-band segment.

Mobile Network Operators (MNOs) can utilize the unused resource blocks of guard bands in the LTE carrier signal itself and occupy a dedicated frequency of 180 kHz bandwidth specifically designated for IoT applications rather than having to share the spectrum with smartphone traffic. Hence, the majority of the MNOs are preferring the guard-band mode for commercial deployment of NB-IoT networks. For instance, in 2018, T-Mobile US, Inc. used the guard-band deployment model to launch nation-wide NB-IoT services in the U.S. Similarly, AT&T and Verizon Wireless have also deployed the commercial NB-IoT networks using the guard-band deployment mode. The use of guard-band mode is also expected to help in ensuring that the services remain unaffected during any potential spectrum re-farming when MNOs upgrade their conventional 3G and 4G networks to the 5G standards.

Based on device type, the market has been further segmented into alarm & detector, smart parking, smart meter, smart lighting, tracker, wearables, and others. The wearables segment dominated the market in 2018 owing to the rapidly increasing demand for sports, fitness, and healthcare devices for personal care and diagnostics. While the rising levels of disposable income coupled with the rising awareness regarding physical fitness are encouraging the younger population to use sports and fitness bands, the adoption of healthcare bands is increasing in developed economies, such as Germany, Japan, the U.K., and the U.S., in line with the growing aging population in these economies. The demand for wearables is expected to increase over the forecast period as a result.

The tracker segment is anticipated to emerge as the fastest-growing segment over the forecast period due to the increasing number of industrial and consumer applications involving tracking and monitoring of assets and people. For instance, the increasing demand for telematics, navigation, and in-car infotainment services from the automotive industry is anticipated to contribute to the growth of the tracker segment over the forecast period.

Based on end-use, the market has been further segmented into automotive, agriculture, infrastructure, healthcare, energy & utilities, manufacturing, consumer electronics, and others. The infrastructure segment dominated the market in 2018 owing to the large-scale adoption of the NB-IoT technology in applications related to smart lighting, smart security and surveillance systems, smart building, environmental monitoring, and disaster management applications as well as smart infrastructure and smart city projects. NB-IoT devices supported by sophisticated analytical tools have provided government agencies and public safety departments with near real-time monitoring capabilities as part of complex smart city systems. 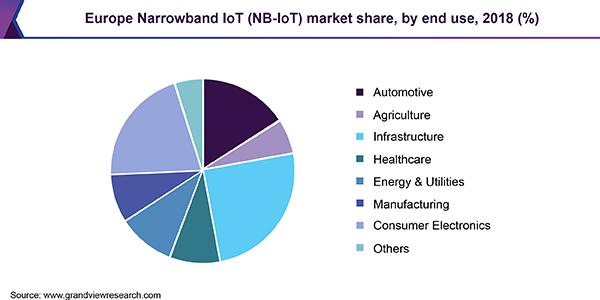 The consumer electronics segment is anticipated to emerge as the fastest-growing segment over the forecast period owing to the continued integration of NB-IoT modules in wearables, smartphones, and other electronic devices to enable users to store data related to all electronic devices on the cloud. For instance, in Germany, Vodafone and Panasonic Corporation collaborated on a pilot project aimed at realizing the value of the technology for home-based appliances.

The North American regional market dominated the global market in 2018. North America is home to several leading device manufacturers and network service providers focusing on testing and commercial deployment of solutions for consumer and industrial applications. Some of these device manufacturers and network operators include Qualcomm Inc., AT&T, Cellco Partnership (Verizon Wireless), T-Mobile US, Inc., and Intel Corporation. The rising levels of disposable income, growing tech-savvy population, and continued adoption of emerging technologies for personal and business applications are some of the other major factors driving the growth of the North American regional market.

The Asia Pacific regional market is projected to emerge as the fastest-growing regional market owing to the increasing internet penetration, the continued rollout of high-speed internet infrastructure network, rising number of smart city initiatives, and increasing levels of disposable income, particularly in economies including China, India, and Japan as well as other countries in the region. Besides, Asia Pacific is also home to some of the major module manufacturers such as MediaTek Inc. and Huawei Technologies Co., Ltd.

This report forecasts revenue growth at global, regional, and country levels and provides an analysis of the latest industry trends in each of the sub-segments from 2018 to 2025. For the purpose of this study, Grand View Research has segmented the global narrowband-IoT (NB-IoT) market report based on component, deployment, device type, end-use, and region: