The global organoids and spheroids market size was valued at USD 405.3 million in 2019 and is expected to grow at a compound annual growth rate (CAGR) of 22.5% from 2020 to 2027. Usage of the organoid models to reveal, how the COVID-19 virus affects several intestinal cells is expected to drive the adoption of organoids in research. Scientists have been using these systems for the testing and identification of promising medications. Companies are engaged in the development and launch of products well before the COVID-19 pandemic. For instance, Agilent Technologies has developed a spheroid microplate that facilitates cellular energy metabolism measurement in 3D cell culture spheroids with the help of a Seahorse XF analyzer. The Seahorse XFe96 Spheroid Microplates developed by the company measures glycolysis and respiration within the 3D cell cultures. Similarly, Corning Incorporated launched HTS Transwell tissue culture systems and spheroid microplates for high-throughput culturing. 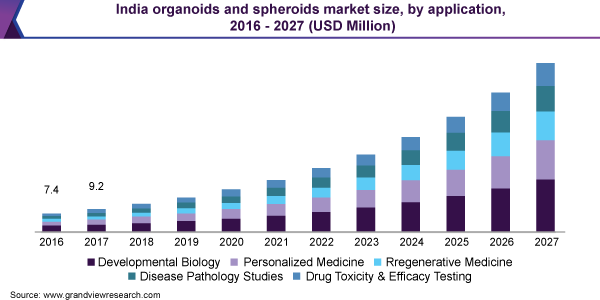 Technological developments in the 3D spheroid technology are expected to drive the market at a significant rate. For instance, the Cultrex Organoid Progenitor Cells introduced by AMS Biotechnology (AMSBIO) can be optimized by the use of different sets of extracellular matrices. Such developments facilitate the researchers to direct the activities of cells by controlling the culture microenvironment. Cultrex spheroid proliferation/viability and invasion assays offered by the company stimulate the development of cohesive spheroids even in low adhesion environments.

The spheroids produced by this technique have been embedded in an invasion matrix and are used for the modeling of cell invasion from tumor spheroids. Researchers have further developed a 3D tri-culture model by adding vascular cells and human mesenchymal stem cells (hMSCs) to these spheroids. These efforts have led to the development of a predictive in-vitro model as the tri-cultures exhibit drug response and tumor morphology similar to xenografts. Such studies have propelled the adoption of spheroids and organoids.

Similarly, the Nano Culture Plate (NCP) and Nano Culture Dish (NCD) developed by SCIVAX Corporation are applicable for high throughput screening (HTS). Moreover, spheroids grown on NCP can be used for live imaging under both fluorescence and bright-field microscopes. Therefore, these plates are now utilized for the development of several assays that were previously difficult to develop by using other 3D and monolayer cell culture systems.

The spheroids segment dominated the market and accounted for a revenue share of 52.1% in 2019. The segment accounted for revenue of USD 211.2 million in 2019. In the past few years, spheroid cultures are in high demand in drug discovery, toxicology, and cancer research. This is because spheroids have a similar development pattern as that of tumors, they can be cultured to produce a large number of cells of a consistent shape and size, can be analyzed, morphologically measured, and counted by the use of a variety of instruments and techniques.

Multicellular Tumor Spheroids (MCTS) model dominated the spheroid type segment in 2019 as it is the most commonly adopted spheroid model for 3D cell culture. An April 2020 study conducted by researchers of the University of Pittsburgh mapped the utilization of MCTS in preclinical cancer drug studies. The study concluded that the utilization of MCTS in oncology drug screening can lead to a better assessment of drug response.

The organoids segment is expected to grow with a lucrative rate as organoids can potentially be used as in-vitro models for drug discovery. MatTek Corporation has cultured 3D organotypic structures for the production and commercialization of in vitro human tissue models. The company has commercialized bronchial airway (EpiAirway), skin (EpiDerm, EpiDermFT), vaginal (EpiVaginal), and ocular (EpiOcular) epithelium.

Intestinal organoids accounted for the largest organoid type segment in 2019. This is attributive to an increase in the availability of commercial model systems and tools to analyze intestinal epithelium. Moreover, intestinal organoids find applications in the area of cell biology, disease modeling, and drug development & screening. This leads to higher adoption of intestinal organoids, and thereby, a higher segment share.

Organoids derived from Induced Pluripotent Stem Cells (iPSCs) and Embryonic Stem Cells (ESCs) have been proved to be beneficial in the study of the process of tissue homeostasis, lineage specification, and embryonic development. This is because organoids retain the features of the developmental stages that they go through. Therefore, these models have been used for the study of the developmental biology of the stomach, pancreas, and brain through induction of sequential differentiation using Fibroblast Growth Factor (FGF), Bone Morphogenetic Protein (BMP), and Wnt signaling pathways.

The regenerative medicine segment is expected to witness the fastest CAGR from 2020 to 2027. Transplantation of organoids and spheroids that are derived from adult stem cells help in the replacement of diseased tissue or organs. For instance, XanoMATRIX surfaces are used for the growth and culturing of mesenchymal stem cells and are also used for regenerative medicine.

The biotechnology and pharmaceutical companies segment accounted for the largest revenue share of 45.2% in 2019. Potential clinical applications of organoids and spheroids have encouraged pharmaceutical startups to venture into this arena. Moreover, the high utilization rate of organoids and spheroids in pre-clinical drug discovery by pharma entities is expected to propel segment growth.

An increase in collaborations and strategic alliances between major players is expected to boost segment revenue generation. For instance, in October 2019, Hubrecht Organoid Technology (HUB) collaborated with MIMETAS to commercialize Organoids-on-a-Chip technology. The agreement provided MIMETAS a license to market HUB Organoids in the format of a ready assay. The companies also joined forces to manufacture disease-specific models. 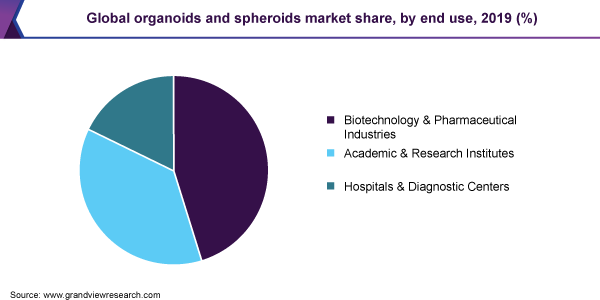 Accelerated uptake of spheroid and organoid culture in government-based research bodies and university projects is expected to drive the academic and research institutes segment with the fastest growth rate. For instance, in June 2019, researchers from the Stanley Center for Psychiatric Research (Broad Institute), and Harvard University developed enhanced human brain organoids to enhance research for neurological disorders.

North America dominated the market and accounted for a revenue share of 41.2% in 2019. This is because of a rise in the implementation of organoid based research models of organoid and spheroid in the U.S. and Canada biotechnology sector. These novel technologies have helped the researchers to overcome limitations faced by 2D cell culture platforms as 3D spheroids offer a microenvironment that can mimic the properties of human tissue structures. This yields predictive results for in vivo tests.

In addition, the local presence of key players, such as Corning, PerkinElmer, and Thermo Fisher Scientific is expected to enhance the growth significantly. Moreover, the existence of international funding organizations in this region is also anticipated to drive the demand for organoids and spheroids culture systems.

In Asia Pacific, the market is expected to witness the fastest growth over the forecast period owing to constant developments in the field of stem cell research. Rise in partnerships among key market entities is expected to enhance the market growth. For instance, in March 2020 Nichirei Biosciences and UPM Biomedicals partnered together to provide UPM culture products in Japan. This enhanced the availability of natural hydrogels for spheroid and organoid culture.

Competition among the existing players has increased owing to developments in technology and its potential applications in the arena of drug discovery. Therefore, key players are continuously involved in the launch of new improved products. For instance, Perkin Elmer offers a wide portfolio of platforms for detection, handling, and analysis of spheroids. Researchers have developed mini lungs to study the mechanism of the entry of SARS-CoV-2 and its spread in tissues. Organoids have also been employed to study the defense mechanism of tissues against SARS-CoV-2. This can potentially help in the development of a vaccine for treatment. Some of the prominent players in the organoids and spheroids market include:

This report forecasts revenue growth at global, regional, and country levels and provides an analysis of the latest industry trends in each of the sub-segments from 2016 to 2027. For the purpose of this study, Grand View Research has segmented the global organoids and spheroids market report on the basis of type, application, end-use, and region:

How big is the organoids and spheroids market?

What is the organoids and spheroids market growth?

Which segment accounted for the largest organoids and spheroids market share?

b. North America region dominated the organoids and spheroids market with a share of 41.24% in 2019. This is because of a rise in the adoption of organoid and spheroid culture systems in the U.S. and Canada.

Who are the key players in the organoids and spheroids market?

What are the factors driving the organoids and spheroids market?