The global pet wearable market size was estimated at USD 1.4 billion in 2018. Growing awareness regarding animal health among owners has been a crucial factor driving the market. Rising disposable income and increasing demand for injectable devices in developing countries such as China is also anticipated to significantly boost the market. IoT is also expected to have a profound effect on medical diagnosis and treatments of pets.

Wearable devices help humans track the daily activities of their pets. They also enable monitoring heart and respiratory rates, along with tracking rest patterns and calories burnt. These devices generate data regarding food intake of companion animals, which may be useful for owners to analyze their health and well-being.

Types of technologies included in wearable devices are GPS trackers, RFID sensors, motion sensors, accelerometer sensors, Bluetooth, cameras, antennas, and transmitters. Wearable devices allow continuous monitoring of body movement, along with measurement of biomechanical and physiological systems of the body. They also allow users to capture their behavior and enhance their engagement with the external environment. 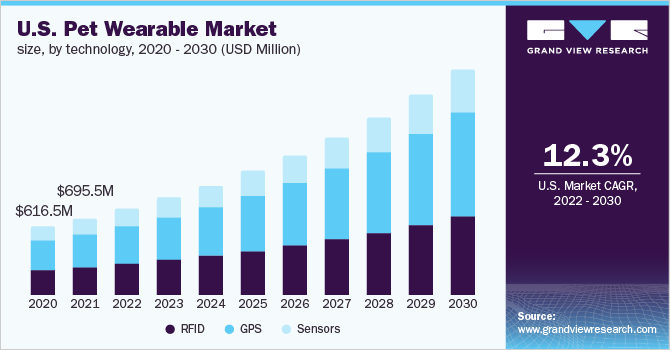 IoT technology is also likely to play a vital role in transmitting key information about animal health metrics to veterinarians and owners. In the coming years, the combination of wearable devices, mobile application, and data analytics technology can be a mainstream option for value-based care. Some wearable device companies are also providing cloud-based data analytics services along with their products, which can be used to help veterinarians diagnose and treat pets by providing valuable clinical information for real-time decision making.

A major challenge for the adoption of pet wearable devices is high power consumption and short battery life. Most wearable devices use innovative technologies such as GPS and wireless networks, which consume a lot of power. Generally, the battery power of these devices lasts for a few days and in case of intense usage, the battery lasts for less than a day. High cost of these devices is another major challenge that is presumed to hamper market growth in the near future.

The medical diagnosis and treatment application segment is expected to exhibit a CAGR of 16.7% over the forecast period and accounted for the second largest share in the pet wearable market. There has been increasing demand for wearable devices that provide quantified information about the physical activity and health of companion animals among owners.

The segment is further boosted by rising concern about obesity in animals such as dogs and cats – a condition that can reduce their life expectancy by two to three years and also lead to other serious diseases.According to a study released by the Association for Pet Obesity Prevention (APOP) in April 2018, around 56% dogs and 60% cats in U.S. were either overweight or obese in 2017, which amounted to roughly 50.2 million dogs and 56.5 million cats.Smart health monitoring devices can play a vital role in improving pet life. These products help in setting and tracking activity and calories goal of the animals, while monitoring important health metrics as well as sending alerts if there is any abnormality in health attributes.

Demand for GPS-based wearables is expected to register the highest CAGR of 14.9% from 2019 to 2025 owing to increasing popularity of GPS tracking devices for pets. Demand for two-way communication for pet tracking devices, which emphasizes on integrated devices and software platforms offered by key industry participants, is expected to attract customer attention. These devices can play a vital role in finding stolen or lost pets and provide owners updates about their whereabouts on their smartphones. Nowadays, various companies are offering a wide variety of trackers with an array of colors, shapes, sizes, and features. 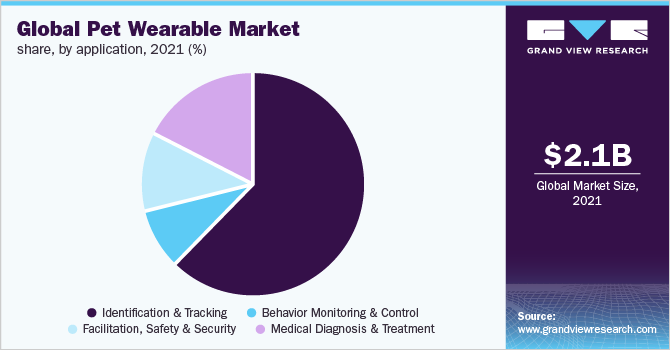 The RFID technology segment accounted for the majority share in the market in 2018. Usage of RFID leads to higher productivity, transparency, reliability, and accuracy. RFID-based pet wearable devices are utilized along with sensors to continuously and accurately track health-related parameters such as pulse, temperature, HRV, positions, respiration, and calorie-intake throughout the day.

The North America market was valued at USD 567.2 million in 2018, enjoying the dominant share in the overall market. Regional growth can be attributed to surging expenditure on companion animals and rising demand for sophisticated technology among tech savvy owners. According to the American Pet Products Association, the U.S. pet industry was worth USD 69.51 billion in 2017.

The Asia Pacific market is anticipated to exhibit the highest CAGR over the forecast period. This market growth can be attributed to rise in adoption of companion animals in countries such as China, Australia, and India as well as growing awareness regarding pet health and fitness.

The global market is still in its nascent stage; however, there is intense competition among existing players and new entrants. Key industry competitors includeWhistle Labs, Inc.; PetPace LLC; FitBark; Tractive;i4C Innovations; and Garmin International, Inc. Players have been resorting to strategies such as new product development and launches, acquisitions, and collaborations to strengthen their position in the market.

Manufactures have been focused on developing innovative products that can collect health metrics of pets, which can be extremely beneficial to veterinarians in many ways. Moreover, animal care and insurance giants are investing in the wearable industry to provide collaborative services to pet owners. For instance, in 2017, RSA, a multinational insurance company, invested in a company called PitPatPet, which provides dog activity monitors with an intelligence data platform. The move was aimed at encouraging and educating owners of companion animals and enabling them to make smart decisions regarding their health.

This report forecasts revenue growth at global, regional, and country levels and provides an analysis on latest industry trends in each of the sub-segments from 2015 to 2025. For the purpose of this study, Grand View Research has segmented the global pet wearable market report on the basis of technology, application, and region: