The global pharmaceutical filtration market size was estimated at USD 13.7 billion in 2016 and is expected to witness lucrative growth during the forecast period. Increasing emphasis on biologics and their development for the treatment of various diseases is a major attribute expected to trigger growth.

The increase in the number of chronic diseases globally is one of the prime reasons for the growth of pharmaceutical industry. There is a high demand for advanced therapeutic drugs for the treatment of chronic diseases such as cancer, diabetes, asthma, COPD, and arthritis. Moreover, production of novel biologics requires utmost sterility and zero risk of contamination which further necessitates the application of advanced filtration products for manufacturing of drugs and biologics.

Increasing investment in research and development of biologics is another prime factor attributing to the growth. Rapid adoption of innovative treatment therapies such as therapeutic proteins, monoclonal antibodies, and vaccines have resulted in increased number of various biotechnology and biopharmaceutical companies that utilize filtration systems including membranes, cartridges, capsules, and other products. In addition, a large number of companies are investing heavily in the manufacturing facilities worldwide. For instance, in October 2016, AbbVie Inc. has invested around USD 320 million to construct a new facility in Singapore for small-molecule and biologic APIs production. Thus, the growth in the biopharmaceutical companies is projected to boost the demand for advanced products.

The technological progression by pharmaceutical filtration manufacturers has also resulted in increasing adoption of these systems in the industry. Majority of the market players are constantly engaged in R&D to improve existing product portfolios and introduce novel technologies to aid in sterilization of the media and the constituents. For instance, AstraZeneca, a leading healthcare company invested around USD 5,890 million in R&D in 2016.

The membrane filters segment is projected to witness growth at fastest CAGR during the study period because of rapid development of drugs and biologics companies. These companies are undergoing collaborations and partnerships to gain maximum share in the market. For instance, in June 2016, Novartis and Xencor Inc., entered into a strategic collaboration where Novartis received rights to develop T-cell-engaging bispecific antibodies intended for acute myeloid leukemia and B-cell malignancies treatment.

The membrane filters are widely used in the development and manufacturing processes including sterile filtration and end-stage processes. Thus, with the increase in incidence of viral and chronic diseases such as anthrax, measles, influenza, tuberculosis, and chickenpox, the demand for advanced drugs and vaccines is expected to accelerate rapidly in the near future. According to CDC, around 5 to 20 percent of the population in the U.S. get infected with flu annually.

Single-use systems segment is expected to grow at significant CAGR during the forecast period. These systems provide several advantages including reduced risk of contamination, minimizes operation time, and provide ease of convenience. Thus the demand for single-use systems is expected to rise in near future. They are also compact in nature and take up less amount of space in the factory settings. For instance, Allegro MVP Single-Use System developed by Pall Corporation can be used across various applications like sterile filtration, bioburden testing, depth filtration, virus inactivation, media and buffer preparation.

Microfiltration technique was the highest revenue generating segment in the year 2016. Product advancement is one of the key driving factor for the segment. For instance, in 2016, Merck KGaA launched a novel Viresolve Pro Shield H that is intended specially for the elimination of parvoviruses from therapeutic protein feed streams. This technique is extensively used by manufacturers for the separation of large particles including proteins and yeast from a liquid feed stream.

Ultrafiltration segment is estimated to grow at lucrative growth due to varied applications of this technique in protein purification, vaccines, and antibody processes. The manufacturers are highly focused on delivering the exact needs of filtration processes in the healthcare industry. For instance, in January 2013, Merck Millipore launched a new Mobius FlexReady Solution, a fully-automated system that ready to set up, which makes it ideal for CMOs and pilot plants that have rapidly changing demands.

The nanofiltration technique segment is projected to showcase significant growth rate during the forecast period owing to innovations in nanofiber technology. The nanofibers are the innovative and next generation of nonwoven filter media, which deliver several unique properties such as good interconnectivity of pores along with high potential to incorporate on a nanoscale.

Cross flow filtration is another technique that is gaining significant share owing to its increasing usage and added advantages such as filter cakeflush away ability, long lifespan, and its deployment for continuous separation process.In September 2016, Sartorius Stedim Biotech launched a novel ultrafilter Sartocon Slice 50, a new crossflow filter system, which is designed for various applications in biotech industry including small-volume process development and membrane screening.

The advancement in technology such ascross flow filtration, nanofiber, and ultrafiltration technology boosts the adoption of innovative filters for final product processing, which is estimated to drive the growth. In addition, the rising adoption of biologics and other therapeutic proteins has led to high usage of protein purification processes in the pharmaceutical and biopharmaceutical industry, which propels the market growth. 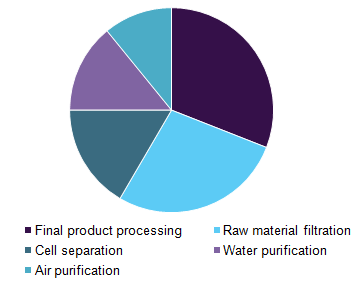 Cell separation is vital in various applications such as in production of monoclonal antibody, vaccine, therapeutic protein to name a few. Microfiltration and depth filtration are used frequently for cell separation applications. The U.S., Germany, U.K., Japan, India, and China are projected to account for large application of these products. The presence of leading healthcare companies, availability of advanced products along with a well-developed healthcare infrastructure in these regions contribute toward market growth.

Air filtration market is anticipated to witness significant growth rate during the study period. It is a vital process in all pharmaceutical and biopharmaceutical companies. The FDA have issued regulations and standards with respect to the manufacturing of drugs and biologics. According to 21 CFR 211.46(c) regulation, air filtration systems shall be used in production areas to control recirculation of dust from manufacturing. Various advanced products such as cartridges and capsules are being used by manufacturers for air purification. For instance, Steridyne PVDF Membrane filter provides broad chemical compatibility, which is ideal for filtration of aggressive process gases such as fermentation air, sterile tank venting, and compressed air & gases.

The pharmaceutical filtration processes are divided on the basis of scale of operations into manufacturing scale, pilot scale, and R&D scale. The manufacturing scale of operations held the largest market share owing to the increase in the production of biopharmaceuticals, generic drugs, and vaccines which are being used for the treatment of various diseases.

The manufacturing scale of operations is expected to continue to flourish during the forecast period as well on the account of increased demand for novel biologics and therapeutic proteins for the treatment of chronic diseases. The rising prevalence of chronic diseases like cancer, arthritis, and diabetes is expected to boost the segment growth. According to the data provided by CDC, around 54 million individuals in the U.S. are suffering from arthritis. Thus, there is high demand for efficient and productive downstream processing products, which is projected to boost the growth.

Dominant pharmaceutical companies are largely investing in the production of biologics and therapeutic proteins generating an added demand for filtration products and accessories. Developing healthcare infrastructure in emerging countries like Brazil, Mexico, South Africa, China, and India along with rising demand for innovative therapeutics have spurred the demand for these products. The focus on development of novel drugs and biological products by manufacturers along with availability advanced technologies are expected to drive the application of filtration in pharmaceuticals manufacturing procedure.

The research and development scale segment is estimated to witness significant CAGR over the forecast period due to the rising investment in R&D for new technology and product development. For instance, the Pharmaceutical Research and Manufacturers of America (PhRMA)member companies have invested around USD 58.8 billion in 2015 for the R&D.

The North American region contributed to the largest share by virtue of large dominant pharmaceutical and biopharmaceutical companies including Hoffmann-La Roche Ltd, Pfizer Inc., Merck KGaA, and Amgen Inc. in this region. Well-developed healthcare infrastructure and accessibility to advanced products in this region have fueled the growth of regional market.

The European region is another dominant region in the market as a result of advanced healthcare infrastructure and the availability of technologically advanced products in the region. Increasing demand for biopharmaceuticals is also expected to drive growth in this region.  European based leading market players like Merck KGaA and Sartorius Stedim Biotech S.A. have a wide distribution network in the region. This enables the European region to capture considerable share owing to development of new systems and devices.

The Asia Pacific pharmaceutical filtration market is expected to witness the highest CAGR during the forecast period owing to untapped market potential in the region. Proliferation of pharmaceutical and biopharmaceutical companies in this region has resulted in immense growth. Heavy investments by CMOs (Contract Manufacturing Organizations) and CROs (Contract Research Organizations) for the production of drugs and biologics as well as less stringent government regulations act in the favor of these companies fueling the growth of the market. Developing healthcare infrastructure and availability of large genome pools are major attributes causing the growth of the market.

The dominant players provide an extensive product range and are constantly engaged in the expansion of their existing portfolios. Majority of these players have an intensified distribution network across a wide geographical region. The strong distribution channels, large product portfolio, and new product launch has led to an intense competition amongst vendors. This has resulted in high pressure on pricing strategies that is expected to affect the profit margin of the vendors.

The leading players are involved in collaborations, new product development, mergers & acquisitions, and regional expansions to gain larger share in the industry. Mergers & acquisitions help the companies to increase their existing product portfolio and geographical grasp. For instance, in August 2015, Danaher Corporation completed the acquisition of Pall Corporation and entered in the filtration, separation, and purification solutions sector.

This report forecasts revenue growth at global, regional & country levels and provides an analysis on the industry trends in each of the sub-segments from 2014 to 2025. For the purpose of this study, Grand View Research has segmented the global pharmaceutical filtration market on the basis of product, technique, application, scale of operation, and region: