The global podcasting market size was valued at USD 9.28 billion in 2019 and is expected to grow at a compound annual growth rate (CAGR) of 27.5% from 2020 to 2027. Podcasts are a series of spoken word audio files that can be downloaded via the internet on playback devices. The easy accessibility of podcasts during transit times and multitasking such as walking, gardening, exercising, or cleaning, drives the market growth. The popularity of this audio broadcasting content was a gradual process since its inception in the early 2000s. This audio content was accessible only on iPods, media players, computers, and laptops, with only radio shows being converted in podcasts. The slow internet speed and low storage space issues hindered this industry's growth back then as users struggled to stream podcasts on their mobile devices. However, the advent of smartphones, high bandwidth, and lately, personal digital assistants has paved the way for this industry and has transformed from niche media to mainstream music mediums. 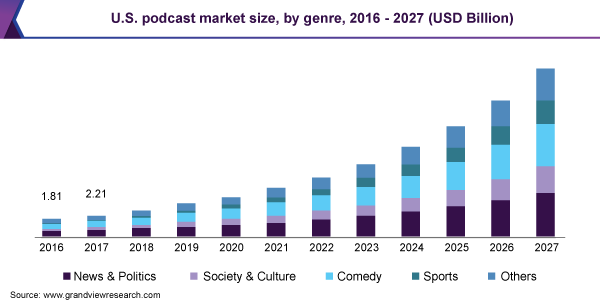 While the market is still in its nascent stage, it has seen tremendous growth in both production volume and consumption over the past decade. According to a report published by the New York City legal body, New York, known as the epicenter of this industry, recorded 42.0 million weekly listeners in 2017. Since the market for podcasts is adapted to follow modern consumption patterns, it is expected to grow exponentially over the forecast period owing to the high demand for readily available entertainment content.

An unviable economic model is one of the major concerns for the market participants offering content on media streaming channels. Since the introduction of podcasts, advertisements were the only revenue-generating stream but failed to secure traction since the listeners did not favor the idea of listening to promotional messages between the ongoing content. However, companies are developing strategies to emerge as a financially attractive medium. Podcasters are coming up with per month subscription services and crowdfunding that enable the users to pay per episode or on a monthly basis.

With the COVID-19 outbreak, listeners worldwide are observed to be spending more time at home due to the work from home policies and stringent norms restricting public gatherings. This has changed the entire dynamics of the market for podcasts where the target audience prior to the pandemic were people listening to broadcasts during their commutes. However, the industry is still expected to witness growth since the listeners are engaged in the content while stuck indoors and while working from home. In addition, several podcasts are now being launched that are dedicatedly offering timely updates on the coronavirus outbreak.

The news and politics segment accounted for the highest revenue share of over 30.0% in 2019, owing to the majority of users observed to be listening to these podcast genres on a daily basis. Since its inception, news and politics have paved the way for hosts and producers to come with new styles for delivering to the audience with exclusive content on current affairs. The genre is famous across all the formats, be it a conversation, solo news announcements, or a panel discussion over any ongoing subject. The podcasting market is categorized by genre into news and politics, society and culture, comedy, sports, and others.

The majority of listeners now prefer micro bulletins and news roundups that summarize the daily happenings in the duration of 1 to 5 minutes and 5 to 10 minutes, respectively. As a result, the print journalists and radio broadcasters are now embracing the audio streaming channel to distribute their content. Over a couple of months, the news genre has attained prominence as more audiences are joining in daily to receive updated information on the ongoing unprecedented COVID-19 pandemic.

The sports segment is expected to expand at the highest CAGR over the forecast period. With the more significant number of avid sports fans worldwide, sports podcasts are gaining popularity. Sportscasters are coming up with daily topics and are offering conversational content by inviting famous personalities from the sports industry to engage the listeners. Barstool Sports, Inc., a provider of blogs on the latest highlights surfacing the sports industry, revealed that the sports genre is growing by nearly 30.0% year over year.

The interview format accounted for a revenue share of over 30.0% in 2019 and is expected to continue dominating the market for podcasts over the forecast period. This podcast format is referred to as a facilitator wherein the host is consistent, and new guests are invited in each episode. The dominant share of the interview format is attributed to the originality and rawness of the podcasts where each guest or invitees in every episode brings with him fresh thoughts, experiences, content, and learnings which turn out to be engaging as well as inspiring for the listeners. Besides, the interview format also invokes various opinions and viewpoints stimulating the discussion, thereby increasing listeners’ interest and engagement. By format, the market is classified into interviews, panels, solo, repurposed content, and conversational.

The solo format is anticipated to expand at the highest CAGR of close to 30.0% over the next seven years. The solo content is recorded by a single person who may have expertise in a specific field or share their experience on particular content. Since the industry is in the midst of its boom, independent publishers are entering into the business with this format, which is simple and requires basic free editing software and a microphone. 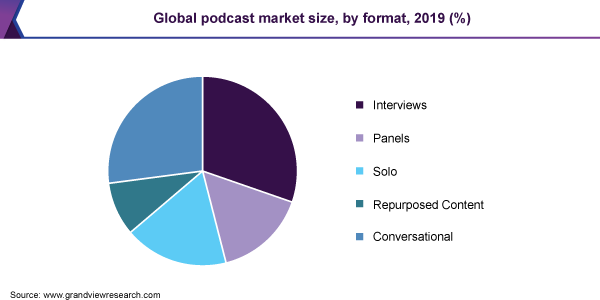 Furthermore, the repurposed content segment is also forecasted to witness significant growth from 2020 to 2027. Repurposing any content involves editing, reworking, and reformatting the content with an aim to reach a broader audience and communicate the same message in other creative ways. Furthermore, these audiocasts intrigue the audience to re-watch the shows/movies available on various Over-The-Top platforms. For instance, ‘Office Ladies’ hosted by the main characters of ‘The Office’ show and ‘Friends Like These,’ a podcast on F.R.I.E.N.D.S. show in the U.S. have been captivating the audience.

North America accounted for the highest revenue share of close to 40.0% in 2019 and is anticipated to retain its dominance over the forecast period. The U.S. alone captured a revenue share of over 35.0% in the overall market for podcasts in 2019. This is attributed to the early adoption of the latest technologies and the presence of a diversified listener base of all age groups in the region.

The Latin American market for the podcast is expected to witness the fastest CAGR of close to 35.0% over the forecast period. The penetration of digital devices coupled with the availability and popularity of podcast contents offered in the Spanish language are the key factors driving the regional market growth. It is presumed that there are almost 500.0 million Spanish speaking people worldwide, particularly in the Hispanic community in the U.S., Latin America, and Spain, which is projected to boost the growth prospects for both Spanish podcast producers and listeners.

Although the subscription services and audio-on-demand are still in their nascent stages in this region, the industry is expected to gain lucrative opportunities as the Spanish audio streaming community holds the highest share of the overall content. While in Latin America, the industry initially began focusing on the English language, the content providers are now emphasizing offering topical content to reach its untapped potential in the non-native English-speaking countries.

The market involves many participants, such as audiovisual groups producing original content and independent studios creating native podcasts. The players analyzed in this report are signified as the virtual distribution platforms offering content to the end-customers. The market is still in its infancy stage and is expected to exponentially grow due to which a more significant number of media companies are trying to capture a considerable share in this market. Since there are low entry barriers, the players from other media industries are collaborating with independent content providers and stressing over offering unique content to capture a more substantial audience share, thereby offering a competitive edge to the industry-leading participants. YouTube, Inc., the U.S. based video-streaming platform, allows the channel admins to upload their audio webcasts with simple static images to expand their digital footprint into this industry as well.

The key players are also collaborating with podcast publishing companies and independent publishers so as to offer fresh and unique content to attract more audience. For instance, in February 2020, Spotify AB acquired The Ringer, which creates podcasts for the sports, society & culture genres, to expand Spotify AB’s current catalog and extend their audience engagement. Similarly, in June 2020, Pandora Media, Inc. announced its strategic partnership with FOX News Network, LLC, a U.S. based audio streaming service platform. All the content created by FOX News Podcasts including the FOX Business Hourly Report and FOX News Radio Newscast will be available to Pandora Media, Inc.’s audience. Some of the prominent players in the podcasting market include:

This report forecasts revenue growth at the global, regional, and country levels and provides an analysis of the latest industry trends in each of the sub-segments from 2016 to 2027. For the purpose of this study, Grand View Research has segmented the global podcasting market report on the basis of genre, formats, and region:

How big is the podcast market?

What is the podcast market growth?

Which segment accounted for the largest podcast market share?

b. North America dominated the podcast market with a share of 40.0% in 2019. This may be attributed to the region's fast adoption of the latest technologies and major podcasting platform providers belonging to the U.S.

Who are the key players in the podcast market?

What are the factors driving the podcast market?

b. Key factors that are driving the market growth include the emergence of podcasts as a preferred and interminable source of entertainment with its easy accessibility on smartphones, smart speakers, and other gadgets at any given point of time during commutes or multitasking.