The global primary cell culture market size was valued at USD 2.4 billion in 2017 and is expected to register a CAGR of 10.6 % during the forecast period. The market currently has low barriers to entry. As a result, an increasing number of small players have been providing good quality tissue samples for research purposes. At the same time, their variety and availability has boomed commercially.

Customization options are now available to end users while selecting the cultures. For instance, choosing between diseased or healthy tissue samples. This customization is constantly growing and attracting large biotech and pharmaceutical companies, which is expected to bridge the gap between demand and supply. 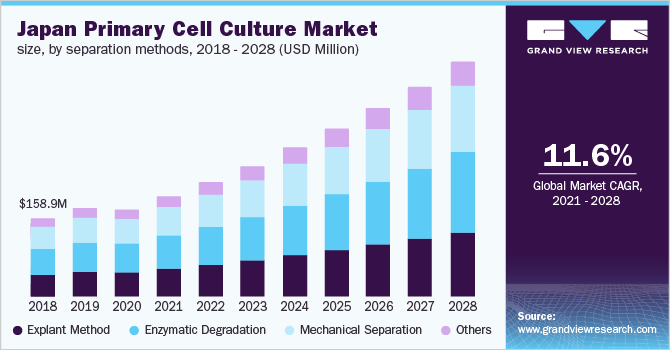 Primary cells imitate the physiological state of other cells in vivo and generate more admissible data for researchers. Depending on type used, these are utilized in several researches and medical applications, such as drug screening, organogenesis, disease diagnosis, biological product manufacturing, cancer research, and stem cell research.

In addition, there are components available in the market that can differentiate between other cell types. They have captured the imagination of scientists across many disciplines because of their multiple applications in the field of healthcare, molecular biological research, and drug development. This is anticipated to lend the market a tremendous boost in the coming years.

Primary cultures require optimum levels of reagents, supplements, and media to support their proliferation. Apart from that, they have a finite lifespan and require careful handling. As they do not have genetic and chemical modifications, they are in high demand for various research purposes.

Demand for and growth of these cellular components and their media is witnessing a surge in the market. With introduction of highly automated instruments, cutting-edge technologies, highly efficient laboratory equipment, and stringent quality control standards, these segments are expected to witness rapid growth over the coming years.

Gene therapy, regenerative medicine, and cancer research exhibit lucrative growth opportunities and this trend is fuelled by rising geriatric population, increase in prevalence of chronic illnesses, and highly advantageous and upcoming uses of stem cell therapies. Another important factor contributing to the growth of these segments is the fact that a mass primary culture, especially mammalian, is an elementary step for production of biotechnological products, primarily viral vaccines.

Owing to innovations in genetic engineering, there has been a significant increase in use of biopharmaceutical products such as monoclonal antibodies and recombinant proteins. Their production is greatly dependent on protein expression systems derived from mammalian primary cultures. In cancer research, these cultures are being used to study cancer mechanisms and develop treatment therapies.

Once primary cells are extracted from the source tissue/organ, they are washed and cleaned to ensure the culture process is not contaminated. Low speed centrifugation, gravity sedimentation, and nylon mesh sieving are some of the easier techniques used for this purpose.

Currently, North America holds the dominant share in the market. This is due to introduction and development of automated culture techniques and increasing usage of advanced therapies in U.S. and Canada. These cultures are commonly used for assays, drug screenings, research, vaccine development, and culturing of monoclonal antibodies. 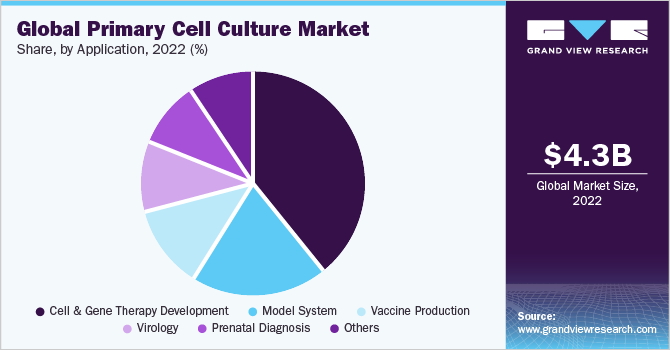 Asia Pacific is anticipated to exhibit the fastest growth rate during the forecast period. This can be attributed to growing healthcare affordability, rising per capita incomes, and improving economic status of countries such as India and China. Japan also presents immense scope for growth thanks to advanced research in stem cell therapies. This trend is expected to benefit the overall APAC market in future.

The utility of primary cultures is being explored further due to widening scope of application. Since the concept of their usage is relatively new, aggressive research by producers, suppliers, and researchers has been an ongoing trend.

The vendor landscape is currently a mix of new and existing commercial players. Companies are involved in introduction of new culture techniques, which are a step up from conventional methods. Leading commercial players in this market include Thermo Fisher Scientific, Inc.; Merck; GE Healthcare; Lonza; Corning; Promocell GmbH; MatTek Ltd.; and Irvine Scientific.

This report forecasts revenue growth at global, regional, and country levels and provides an analysis on latest industry trends in each of the sub-segments from 2014 to 2025. For this study, Grand View Research has segmented the global primary cell culture market report based on product, application, separation and culture technique, and region: