The global protein engineering market size was valued at 823.0 million in 2016 and is anticipated to grow at a CAGR of 15.9% throughout the forecast period. The market is predominantly driven by increasing preference for protein therapeutics over non-protein drugs. The high preference is presumed to be a consequence of positive clinical outcomes associated with these drugs.

Protein engineering is broadly used to circumvent weaknesses associated with drugs, and it possesses the potential to enhance affinity & efficacy of molecules for wide range applications, such as cardiac repair. This has led to unprecedented demand and, consequentially, a significant increase in the adoption of these tools for the development of advanced therapeutics, thereby resulting in rapid market progression.

For instance, advent of recombinant Monoclonal Antibodies (mAbs) is a result of extensive use of protein engineering tools. The humanization and chimerization of mAbs and additional approaches to improve them in vivo activity led to increase in the number of alternatives for the treatment of various cancers, transplant rejections, autoimmune diseases, and other conditions.

The engineered molecules exhibit enhanced efficacy, reduced immunogenicity, greater safety, and improved delivery. Humulin (human insulin), the first protein therapeutic developed through recombinant DNA technology, was approved by U.S.FDA in 1982. The ability to significantly modify the functioning of a particular drug molecule through protein engineering, such as modification of substrate-specificity of human butyrylcholinesterase, exemplifies the high potential of protein engineering on drug metabolism and medicine.

Rising urgency to curb high R&D costs in clinical trials is the high impact-rendering driver of the market. Elevated costs are consequences of a high failure rate in the preclinical development. The marketing and commercialization of new drug molecules is a complex process and demands a longer duration. Approximately 50% of the compounds fail in the early clinical trials, thus significantly contributing to the overall cost.

In addition, according to the Journal of Health Economics, the average expenditure during drug discovery and development process was found to be USD 800 million. Moreover, according to a survey by the Tufts Centre for the Study of Drug Development, one in 1,000 drug compounds reach later phases of clinical trials. The aforementioned factors exemplify the need for platforms such as protein engineering, which can help reduce research costs.

Incorporation of advanced software during preclinical development is believed to surpass a few stages of drug discovery and development of potential drug candidates later on. Furthermore, regulatory authorities are consistently striving to reduce the time and cost involved in the process of drug discovery. For instance, the U.S. FDA launched the Critical Path Initiative in an attempt to incorporate advanced technologies in the drug discovery processes.

Rational design dominated the technology segment with a share of over 39.0% in 2016. The dominant share can be attributed to the extensive usage of this technology in antibody and enzyme engineering. The unprecedented expansion in commercial applications and enzyme engineering resulted in enhanced and modified enzymes possessing desired catalytic properties.

Site-directed mutagenesis is one of the frequently used rational design methods that aids in obtaining greater insights on enzyme binding and catalytic mechanisms, which thereby broadens the scope of functional prediction of new genome sequences. The consistent use of rational design has been exemplified in the development of a faster superoxide dismutase, one of the fastest known enzymes in nature.

In addition, it is anticipated that rational design can further be implemented as a consequence of the development of modeling tools and a rapidly growing number of 3Dstructures in databases. Protein remodeling is one of the major applications of rational design, serving as a major contributing factor to the dominant share of rational design.

Hybrid approach is presumed to attain the fastest CAGR of over 16.0% during the forecast period. Hybrid approaches that use a combination of directed evolution and rational design are increasingly used in various applications, such as for enhancement of redox proteins and enzymes. These enzymes hold high importance in the development of nanodevices for biosensing and other major nanotechnology applications, thus engendering future growth prospects.

Instrument accounted for the largest share in the product segment in 2016. The largest share captured by this segment is believed to be a consequence of high preference for automated technology by the researchers in order to facilitate a faster molecule development process. For instance, instrumentation of real-time PCR in quantitation of nucleic acids is highly preferred in academic research, as it facilitates a greater understanding of the chemical structure of mutated nucleic acids

Extensive usage of new technologies and process advancements in proteomic research are high-impact rendering drivers of the market. These technologies include mass spectrometry, gel electrophoresis, and computational prediction programs. These facilitate efficient identification, characterization of proteomes, and determination of function, which are critical aspects of protein engineering, thereby encouraging high adoption of instruments. These factors cumulatively are believed to be responsible for the substantial share in the product segment.

Software & services are expected to witness lucrative CAGR as a consequence of increasing usage in a wide array of applications that suit the interests and needs of researchers. In addition, majority of processes are dependent on software, which is the key factor presumed to be responsible for the high growth potential attained by the segment. The anticipated fast growth is also believed to be a result of complex, multilayered drug development system in which, these services may prove imperative.

The market players are involved in the development of an array of services that simplify the overall process. The services provided by these key players result in reduction of the overall expenditure and, thus, promote the use of these technologies by researchers and scientists.

mAbs accounted for a dominant share of the protein type segment in 2016 and are anticipated to grow at a lucrative rate during the forecast period. Growing R&D expenditure in the development of therapeutically advanced mAbs is presumed to be one of the significant factors responsible for increased adoption of these tools.

High demand for personalized medicine is also considered as a high-impact rendering driver for the growth attained by this segment over the years. Moreover, protein engineering provides various benefits, such as fewer adverse effects and higher homogeneity & specificity of mAbs, which thereby drive the preference by researchers in the modeling of mAbs to yield therapeutically superior versions.

In addition, government initiatives to enable cost-effective production of mAbs are predicted to impel the usage over the coming years. For instance, the National Institute of Standards and Technology in the U.S. has issued biomanufacturing initiative and stringent regulatory guidelines to ensure the effective and safe manufacturing of low-cost, high-quality drugs globally.

The incorporation of technologically advanced genetic platforms that include protein engineering and next-generation sequencing is anticipated to increase the growth potential. In addition, the cost-effective nature of the aforementioned technologies is presumed to support research studies to develop new generation of mAbs, which is anticipated to present a billion-dollar opportunity to major pharmaceutical companies in the future.

Pharmaceutical & biotechnology companies held a dominant share in the end-use segment in 2016. The substantial share can be attributed to the increasing adoption of in silico models to develop new protein-based drugs in the following applications: cancer, diabetes, and central nervous system diseases.

These companies are consistently striving to sustain the market by developing drug variants of a patent expiring drugs by incorporating the computer modeling approach. The increasing inclination of public & private healthcare organizations toward promoting advanced engineering to yield better patient outcomes serves as one of the key factors responsible for the substantial share of the segment. 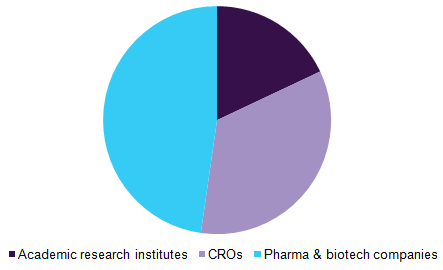 Furthermore, supportive organizations allot funds to major pharmaceutical and biotechnology companies to develop new- and advanced generation therapeutics, thereby leading to greater adoption of engineering tools by these companies. The aforementioned factors are anticipated to be responsible for the dominant share registered by the segment.

Contract research organizations are expected to grow at a lucrative rate throughout the forecast period. This highest growth can be attributed to the growing inclination of companies to reduce overall expenditure along with utilization of benefits involved. It primarily includes cost advantages, increased efficiency of services, enhanced productivity, and higher focus on the core areas of development-all of which are critical to a company’s growth.

In 2016, North America captured a dominant share of the market. A consistent number of collaborations encouraged by key market players for increasing their R&D capabilities are presumed to be responsible for the greater share captured by this region.

Moreover, the established pharmaceutical companies in this region are extensively involved in the commercialization of advanced engineering tools and the promotion of their usage in the research community.

The Asia Pacific market is expected to witness the fastest CAGR during the forecast period owing to the growing presence of contract research organizations, rising healthcare IT spending, and unprecedented evolution of the healthcare infrastructure & standards across this region.

Favorable government initiatives that support research activities and the increasing trend of outsourcing by developed economies also serve as key growth impelling factors for this region. The companies are consistently striving to develop better medication options at a faster and cheaper rate through molecular modeling techniques.

The market is marked by the extensive implementation of sustainability strategies by the key players such as Agilent Technologies, Thermo Fisher Scientific, Waters Corporation, which accounts for their dominant market share. These players are highly focused on strategies such as mergers & acquisitions, new product development initiatives, and geographical expansion.

For instance, in March 2017, Agilent Technologies launched a research-grade triple quadrupole LC/MS system. This product was launched for expanding research capabilities to provide greater accuracy and sensitivity in various applications, such as environmental, clinical research, peptide quantitation, and forensic toxicology.

This report forecasts revenue growth at global, regional & country levels and provides an analysis of the industry trends in each of the sub-segments from 2014 to 2025. For the purpose of this study, Grand View Research has segmented the global protein engineering market on the basis of technology, product, protein type, end use, and region: