The global rat model market size was valued at USD 412.3 million in 2016 and is expected to grow at a CAGR of 8.3% over the forecast period. The growing development of new medical devices and biotechnological products is anticipated to support the growth of the market. The rising number of new players coming up with innovative healthcare solutions is anticipated to promote the growth of the preclinical testing market, which is expected to boost demand for rat models. Mice and rats are the most commonly used rodents for laboratory testing of new molecules.

According to data published by the Human Genome Project, the rat genome is similar in size to that of human i.e., about 2.75 billion bases. Of these, about 25,000 genes are comparable to those present in humans, which makes it a suitable experimental animal. As of 2016, the laboratory rat has contributed significantly to the field of research for indications such as neural regeneration, diabetes, cardiovascular medication, gastrointestinal disorders, and transplantation.

This market is expected to witness direct competition by the mice-based models, which are preferred over rats. Research is conducted across the entire life span of these mice depending on the type and need of study. The C57BL/6 is the most commonly used mice strain in the R&D market and the cost for 21-day old male and female is USD 21 and USD 22.65, respectively.

A variety of rat models are available for the purpose of research and are inclusive of immunodeficient i.e., genetically modified or conditioned rats. As of 2016, the outbred type held the majority of the share owing to the presence of genetic variation among the strain that is evident for at least four generations. Such models allow in-depth research and further help in predicting variations in reactions for the same drug by individual animals.

This type of model is mostly supplied by commercial breeding firms and is not developed in-house by pharmaceutical companies, thereby withholding the majority of the shares. However, there are few types of models that are gaining popularity over the outbred ones. These include knockout, hybrid, and conditioned rats.

Based on technology, the rat model market is segmented into nuclear transferase, microinjection, embryonic stem cell, and other. As of 2016, the other technology dominates owing to the higher use of Clustered Regularly Interspaced Short Palindromic Repeats (CRISPR).

Owing to the rising demand for conditioned and genetically modified animals, CRISPR technology is finding higher application within the rat-based research activity. Furthermore, the other segment is inclusive of additional technologies such as vector-mediated gene transfer, biolistic, and Zinc Finger Nuclease (ZFN).

Market players for the rat model industry offer numerous services such as genetic testing, cryopreservation, quarantine facility, breeding, rederivation, and others. As of 2016, breeding was the largest and most commonly opted service contributing over 30.0% of the total revenue. Breeding is anticipated to sustain its dominance over the forecast period. However, coupling up of multiple services along with breeding such as quarantine facility is expected to promote the growth of other segments. For instance, Charles River Laboratories International, Inc. offers its clients with options of only breeding or:

The models find vast applications across the width and breadth of the healthcare domain. For instance, research of autoimmune conditions in rodent species is well-established in the mature regions of the industry. The Jackson Laboratory offers various rat species to perform toxicology and study the efficacy of therapeutic compounds for a variety of autoimmune conditions. Similarly, the presence of various Contract Research Organizations (CROs) catering to services for toxicology testing and safety evaluation is expected to drive the market over the forecast period, thereby making it the largest segment. 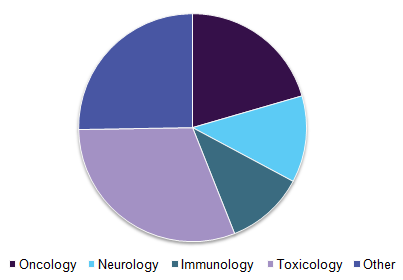 Neurological diseases are expected to be a lucrative segment for pharmaceutical players due to the rising incidence of diseases such as Alzheimer’s, stroke, and Parkinson’s disease. According to the National Institutes of Health (NIH), these diseases cause an economic burden of over two trillion in North America and Europe. It also states that the pharmaceutical industry gains about USD 80.0 billion annually by producing medications for these conditions. This makes the segment highly lucrative for research activities.

Based on end-use, segmentation comprises of CROs, academic and research institutes, and healthcare companies (pharmaceutical, medical device & biotechnology). As of 2016, healthcare companies are predicted to hold the majority of the share. However, the rising establishment of new CROs and increasing frequency of outsourcing research activities is expected to support the growth of CROs. Hence, this segment is anticipated to witness the fastest growth over the forecast period.

The rising incidence of chronic conditions, introduction of new infectious strains, and growing healthcare economic burden over matured regions such as North America are expected to boost the research activities within the area. On the contrary, the possibility of research at a reduced cost in countries such as Japan, India, Thailand, and Singapore is anticipated to promote the growth of the rat model industry within the Asia Pacific region. The region is expected to hold over 10.0% of the share by 2025.

The industry is flooded with providers of animal testing services and is inclusive of players such as genOway, Charles River Laboratories International, Inc., Envigo, Covance Inc., Horizon Discovery Group plc, Janvier Labs, Taconic Biosciences, Inc., and Biomedical Research Models (Biomere). Furthermore, the industry is expected to witness aggressive competition with the rising number of entries by midsized and small-scale companies. The number of CROs and animal testing providers in the U.S. are expected to double over the next 3 to 4 years.

This report forecasts revenue growth and provides an analysis of the latest trends in each of the sub-segments from 2014 to 2025. For the purpose of this study, Grand View Research has segmented the rat model market on the basis of type, technology, service, application, end use, and region: