The global roll-your-own-tobacco products market size was valued at USD 7.14 billion in 2019 and is expected to grow at a compound annual growth rate (CAGR) of 4.2% from 2020 to 2027. Demand for roll-your-own (RYO) tobacco products is primarily driven by their relatively lower cost as compared to factory-made (FM) cigarettes. In several countries, the taxation regime has a limitation in terms of the production and consumption of RYO tobacco. Therefore, it has gained traction among the financially stressed consumers over the world. Some studies have reported that the use of roll your own tobacco products has increased in developed economies, such as the U.S. and U.K, due to the Global Financial Crisis (GFC). 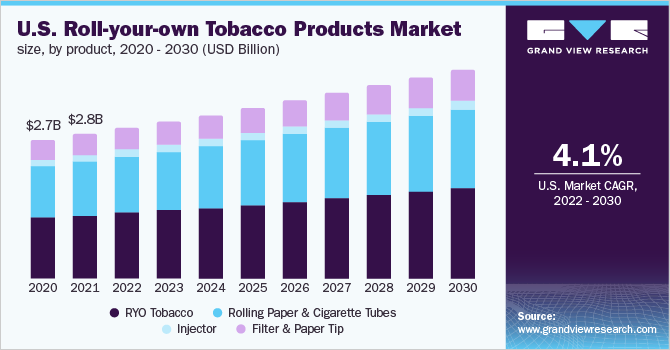 A large number of roll-your-own-tobacco product smokers assume that RYO tobacco is not as harmful as factory-made (FM). This tendency has also contributed to the growth of the market. In several Asian countries, hand-rolled cigarettes are also known as “poor man’s cigarette”. Use of this product is often associated with low income and socioeconomic status. In developing nations such as Thailand and Malaysia, RYO smoking was related to low income, unemployment, and low education.

In addition, increasing concerns about the environment among the consumers have been encouraging manufacturers to introduce eco-friendly and innovative products, including treeless filter tips and rolling papers. Over the past few years, producers have been offering organic rolling paper made with cultivated cotton and fruit and vegetable pulp. Increasing environmental awareness has opened up new avenues for manufacturers. Several companies have shifted to sustainable or “green” packaging, which is expected to appeal to the concerned consumers.

Growing acceptance of electronic cigarettes, particularly among younger consumers, may hamper the growth of the market in the upcoming years. However, manufacturers of the industry are expanding their portfolio with innovative and appealing flavors in order to gain traction among the consumers. As a result, a variety of flavors are made available in the roll-your-own-tobacco products industry, including mint, watermelon, choc-chip cookie dough, and bubblegum.

The offline distribution channel held the largest share of over 85.0% in 2019. This distribution channel is a well-established route for the manufacturers. Furthermore, a large number of consumers prefer to buy roll-your-own-tobacco products from brick and mortar stores as they can touch, test, and feel the product before buying it. These factors have been attracting consumers to purchase from offline retail outlets. Furthermore, the increasing number of supermarket and hypermarket chains in developing countries, including India, China, and Brazil, is expected to boost the sales of the roll-your-own-tobacco products through this distribution channel.

Online channel is projected to witness the fastest growth in the upcoming years. Increasing number of smartphone and internet users is expected to boost the segment growth across the globe. In addition, the convenience of shopping through online retails plays an essential role in influencing consumer preferences. Furthermore, growth of the segment can be attributed to the increasing number of online retailers offering competitively priced products.

The RYO tobacco segment dominated the market for roll-your-own-tobacco products with more than 40.0% share of the total revenue in 2019. The cost-efficiency of the product has made it popular among young consumers. Furthermore, in several countries including the U.K. and Australia, the products have been marketed as “natural” and “cool” options. This changing campaign has been portraying the product as more natural and safer to the consumers. In addition, numerous smokers incorrectly trust that RYO cigarettes are less injurious than factory-made cigarettes. This assumed health advantage of the product has been driving its demand among consumers across the globe. 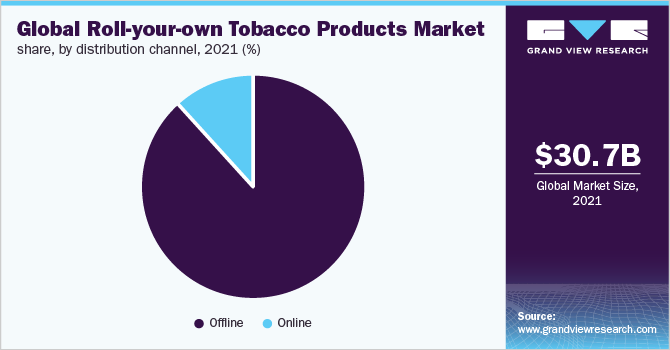 The filter and paper tip segment is expected to expand at the fastest CAGR of 4.7% from 2020 to 2027. Consumers have been using filter increasingly in order to reduce the consumption of tur and other harmful elements. In addition, over the past few years, demand for natural and as well as flavored filters and paper tips has been rising significantly. As a result, roll-your-own-tobacco manufacturers have been introducing such products to capture the growing demand. For instance, in July 2018, Imperial Brands introduced its Gold Leaf Ice Pack RYO cigarettes under its Rizla brand. These products are redeveloped from ultra-slim menthol-flavored tips.

Europe dominated the market for roll-your-own-tobacco products in 2019 with more than 55.0% share of the global revenue. U.K., Germany, France, Netherlands, Belgium, and Luxembourg are the prominent markets of the region. Over the past few years, the use of RYO cigarettes has increased significantly in the U.K. The tax difference between RYO and factory-made cigarettes is the major factor driving the market in this nation. Moreover, lack of restrictions and easy accessibility of the product has fueled the market growth across the region.

North America is anticipated to expand at the fastest CAGR of 4.8% from 2020 to 2027. Though the U.S. has less proportion of consumers using roll your own tobacco products, predominant RYO users have been increasing in the nation over the years. In addition, major RYO consumers in Canada are inclined to be heavier smokers.

The established players dominate the market owing to their high investment capacity and economy of scale. Manufacturers have been introducing innovative and environment friendly products, including rolling papers and filters, to expand consumer base and gain a competitive advantage over others. For instance, in December 2017, Karma Filter Tips introduced its 100% biodegradable filter tip. These tips are featured with plant seeds, which breed plants once they are disposed of into the ground and also enhance the smoking experience. Some of the prominent players in the roll-your-own-tobacco products market include:

This report forecasts revenue growth at the global, regional, and country levels and provides an analysis on the latest industry trends and opportunities in each of the sub-segments from 2016 to 2027. For the purpose of this study, Grand View Research has segmented the global roll-your-own-tobacco products market report based on product, distribution channel, and region:

How big is the roll-your-own-tobacco products market?

What is the roll-your-own-tobacco products market growth?

Which segment accounted for the largest roll-your-own-tobacco products market share?

b. Europe dominated the roll-your-own-tobacco products market with a share of 58.1% in 2019. This is attributed to predominant consumption in countries U.K., Germany, France, the Netherlands, Belgium, and Luxembourg.

Who are the key players in roll-your-own-tobacco products market?

What are the factors driving the roll-your-own-tobacco products market?

b. Key factors that are driving the roll-your-own-tobacco products market growth include low cost as compared to factory-made (FM) cigarettes and supportive taxation regime for RYO tobacco in some countries.