The global shared mobility market size was valued at USD 104.95 billion in 2017. It is anticipated to expand at a CAGR of over 25% from 2018 to 2025. Growing penetration of connected vehicles and smartphones is one of the key trends escalating market growth. Increasing on-road vehicle traffic and fuel costs, coupled with reduced parking spaces, especially in developed countries across the globe are estimated to further stimulate the growth of the market over the coming years.

Shared mobility services offer options to cancel or modify bookings instantly. Moreover, they are less expensive as compared to other transportation modes and eliminate issues of limited parking space. Various governments worldwide are introducing initiatives to encourage the growth of such solutions in an attempt to reduce traffic congestion on roads. 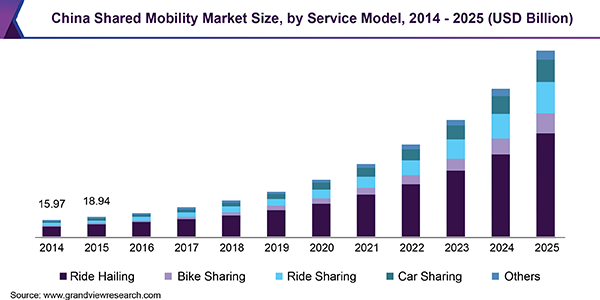 Increasing costs of vehicle ownership are encouraging individuals to opt for solutions offering sharing of a wide range of transportation modes. Moreover, solutions enable users to book, modify, and cancel bookings instantly. The adoption of ride-hailing services is high, especially in emerging economies such as India and Mexico. This is expected to positively influence the growth of the market through 2025.

Lack of awareness regarding benefits of such service models can inhibit the growth of the market over the forecast period. Moreover, in case of ride-sharing, individuals are reluctant to share their vehicles with strangers, resulting in reduction in the number of vehicles participating in the segment. Substandard connectivity and excessive costs associated with development of internet infrastructure in some of the low-income countries in the Middle East & Africa are also restricting the market from realizing its utmost potential.

Various government initiatives encouraging promotion of shared services are acting as catalysts for consolidation of the industry. For instance, EU commission and government agencies, such as the Center on Regulation in Europe (CERRE), have started providing incentives to vehicle owners in order to encourage adoption of these services. In September 2016, the EU commission commenced implementation of incentives for adoption of low-emission shared mobility alternatives, including car-sharing, car-pooling, and bike-sharing.

Prominent global players are constantly focusing on entering into collaborations with automobile manufacturers to enhance their electric car sharing service portfolio in Asian countries. For instance, the EVCard collaborated with BMW to launch ReachNow in China for offering innovative transportation solutions. The adoption of such strategies is likely to work in favor of the market over the forecast period.

The ride-hailing segment dominated the market in 2017. It is poised to maintain its position throughout the forecast horizon. The growth of the segment can be attributed to rising internet penetration in emerging and densely populated countries across the globe. Emergence of new models of services for ensuring customer satisfaction is further projected to contribute to the growth of the segment. For instance, Uber has introduced business variations such as UberBlack, UberSUV, UberLUX, and UberTax, which involve the use of dedicated Uber vehicles and drivers on a for-hire business.

The bike sharing segment is anticipated to register the highest CAGR over the forecast period. Bike sharing is a cost-effective and quick-to-implement option as compared to other models. Several industry players are making considerable investments to expand their operations. In October 2017, LimeBike raised USD 50 million to carry out its operations in the U.S. In March 2017, the company had raised USD 12 million to expand the portfolio of its bike sharing services. This model is also gaining popularity owing to less space required by bikes while parking.

Car sharing is estimated to witness substantial rise in the demand over the forecast period. It is significantly contributing to reduction in car ownership levels. Growing prominence of free-floating model in developed countries, owing to benefits such as flexibility and spontaneity, is further expected to supplement the growth of the car sharing segment over the forecast period.

The revenue generated by services availed through cars accounted for a larger share in 2017. The cars segment is likely to continue to dominate the shared mobility market through 2025. The growth of the segment can be attributed to increasing demand for ride-hailing, ride-sharing, and car-sharing services. As per the estimates by the Center of Automotive Research, in Europe, the number of vehicles used for car sharing crossed 60,000 in 2014, followed by North America, wherein over 25,000 cars were used in 2017.

Industry participants are focusing on expanding these services in emerging economies as well. For instance, in September 2016, Uber India planned to lease around 200,000 passenger cars by 2018 for drivers willing to join the ride hailing platform. Such initiatives are poised to create high potential for the growth of the market. 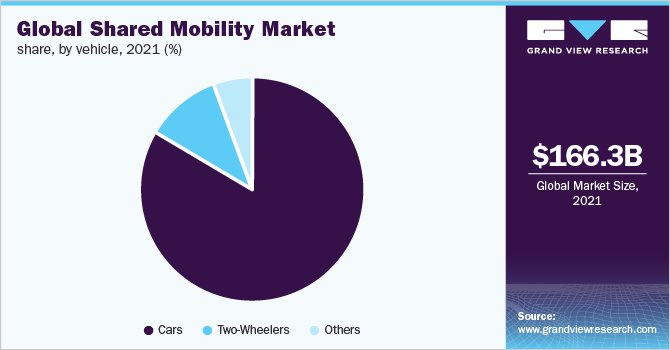 Services availed through two-wheelers are projected to gain prominence in the next few years as bikes are perceived to be economic as well as a faster mode of transport in congested city roads. Countries registering high adoption of these services include the U.S., China, Spain, and Italy.

According to the Center of Automotive Research, in October 2015, the U.S. witnessed the use of 30,700 shared bikes across 3,300 stations. Moreover, several city councils across Europe have awarded tenders for implementation of a few Bike-Sharing Schemes (BSS) over the coming years. Such government initiatives are anticipated to further boost the demand for two-wheeler sharing.

The market in Asia Pacific is estimated to account for the largest revenue share through 2025. On-road vehicle traffic and costs of vehicle ownership are constantly increasing in countries such as China and India. Moreover, countries such as India, wherein urban population is on a rise and transportation infrastructure is developing, exhibit high growth potential for these services.

The Middle Eastern & African market is expected to post a noteworthy CAGR of over 26.0% from 2018 to 2025. Surging demand for shared transportation solutions owing to increasing number of corporate travelers in various countries such as the U.A.E. and South Africa is stoking the growth of the market. Moreover, increasing focus of the U.A.E. government on creating alternative mobility forms for reducing traffic congestion issues and greenhouse gas (GHG) emissions is likely to augment the regional market during the forecast period.

Incumbents of the market, including DiDi Chuxing, Uber, and Lyft, are focusing on introducing new services to expand their customer base and increase their visibility. In April 2018, Lyft planned on providing its ride-hailing services in Japan to cater to increasing demand for this service and strengthening its foothold in Asia Pacific.

In January 2018, DiDi Chuxing announced the launch of a comprehensive bike-sharing platform that is able to integrate its own bike-sharing service with other potential bike-sharing partners such as Bluegogo and Ofo. In March 2017, DriveNow introduced a new rental process in its mobile app and vehicles that considerably decrease reservation and driving away time. Besides this, service providers are also focusing on collaborating with a wide range of participants across the value chain to enhance their service portfolio. In February 2018, DiDi announced the launch of its car-sharing platform, in partnership with automobile manufacturers, after-sales service providers, and new-energy mobility infrastructure operators.

Shared mobility service providers are focusing on forming partnerships with automobile leaders and various value chain participants to increase their customer base. Additionally, they are focused on introducing new services to expand their portfolio and enhance their footprint in the market. Few of the companies are increasingly focusing on building small, electric, and autonomous cars. The industry is poised to witness high rivalry owing to growing number of players and services provided by them.

This report forecasts revenue growth at the global, regional, and country levels and provides an analysis of the industry trends in each of the sub segments from 2014 to 2025. For the purpose of this study, Grand View Research has segmented the global shared mobility market report on the basis of service model, vehicle, and region: