The global smart finance hardware market size was valued at USD 14.07 million in 2021 and is anticipated to register a compound annual growth rate (CAGR) of 2.4% from 2022 to 2028. Smart finance hardware includes IoT components such as a communication module, a processing module, data acquisition, and sensors for ATMs. The rising adoption of smart ATMs across smart cities is one of the major factors propelling the market growth during the forecast period. 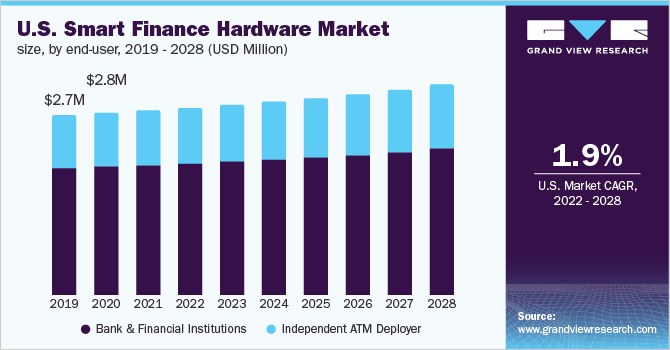 Smart ATMs are increasingly being deployed in bank locations for providing customers the ease of cash withdrawals, deposits, and transfers. Moreover, the rising technical development in IoT technologies, such as the integration of data analysis tools, is further projected to contribute to the growth of the market during the forecast period. However, the growing data breaches and rising concerns related to data security are anticipated to hinder the market growth.

The growing integration of next-generation smart ATMs that can be remotely maintained further encourages the demand for smart devices among end-users, which is projected to contribute to the growth of the smart finance hardware industry. For instance, a bank in Russia is using facial recognition through Intel RealSense camera technology to avoid fraud in ATMs.

Moreover, the growing number of ATMs is further projected to provide ample opportunity to the market for growth. As per World Bank data, in 2019, there were 42.6 ATMs per 100,000 people across the globe, which further increased to 51.6 ATMs per 100,000 in 2020. Therefore, the growing number of ATMs coupled with the rising integration of IoT devices in ATMs further enhance the growth of the market during the forecast period.

The COVID-19 outbreak negatively impacted the smart finance hardware market, as many of the bank ATMs were closed during the lockdown. This measure by the governments globally restricted the new installation of ATMs. The restriction of outbreak further decreased the transactions through ATMs, as people chose UPI and other wireless transactions during the pandemic that affected the market growth.

Moreover, the shutdown of manufacturing units of hardware across the globe during the pandemic further impacted the market advancement. However, the adoption of contactless ATMs is projected to rise after the pandemic is over, owing to the high demand for less contact-based transactions in the BFSI sector.

The bank & financial institutions segment contributed to a larger market share of over 70% in 2021. The growth of the market is attributed to the rising trend toward the deployment of smart ATMs on bank premises across the globe. Bank & financial institutions are increasingly deploying smart and contactless ATMs to provide a better experience of banking to their customers.

Additionally, the high expenditure of banks towards the integration of IoT-based devices in ATMs further contributed to the higher market share of the segment in 2021. Moreover, significant growth in the BFSI industry coupled with the adoption of advanced ATMs in emerging economies further contributed to the growth of the market. Based on end-user, the global market for smart finance hardware is classified into bank & financial institutions, and independent ATM deployers. 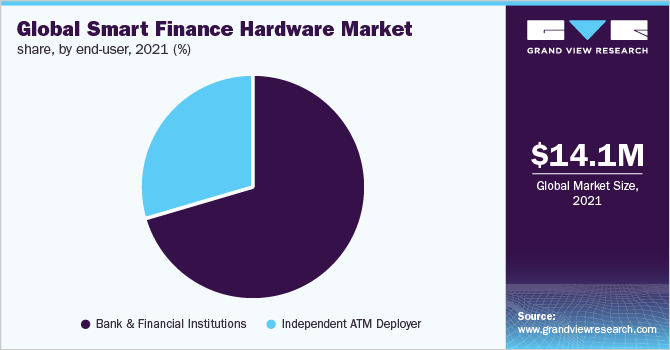 As per an extensive survey, the number of autonomously deployed ATMs in the U.K. rose by 2.6% over the past few years. Additionally, the independent ATM deployers are increasingly adopting the transaction monitoring and analytics platform that is further expected to accelerate the market growth during the forecast period.

Asia Pacific is forecast to advance with the highest CAGR of 3.2% from 2022 to 2028. China and India are positively contributing to the growth of the market owing to the growing demand for smart ATMs in the BFSI sector, coupled with the rising smart city initiatives across the region. Moreover, the growing number of secured internet servers in China, Japan, and India further augment the number of connected devices in the region, thus encouraging the regional demand for smart ATMs.

Along with that, the significant increase in the number of ATM installations in the region is further projected to provide ample opportunity for the market to advance. For instance, as per World Bank data, in China, India, and Japan, there were around 87.8, 21.5, and 124.1 ATMs respectively for every 100,000 people in the countries.

North America held a significant market share of around 23% in 2021. The U.S. is positively contributing to the growth of the market revenue. The presence of well-established market players such as Intel Corp., Diebold Nixdorf, Microchip Technology Inc., and others is one of the driving factors for market growth. Moreover, the developed IT infrastructure in the BFSI sector increases the easy deployment of IoT-based devices such as smart ATMs in the region, thus further contributing to the significant share in the global smart finance hardware market.

Moreover, the significant expenditure on smart infrastructure, coupled with the availability of a high number of secured internet servers, further contributes to the substantial market share. Additionally, innovations in IoT applications and the introduction of various smart devices can be attributed to the market growth in the region.

Major players are targeting new regions and geographies to increase the revenue from the industry, by either entering the new market solely or by collaborating with local companies across the globe. Some of the prominent players in the global smart finance hardware market include:

This report forecasts revenue growth at global, regional, and country levels and provides an analysis of the latest industry trends in each of the sub-segments from 2017 to 2028. For this study, Grand View Research has segmented the global smart finance hardware market report based on end-user and region:

How big is the smart finance hardware market?

What is the smart finance hardware market growth?

b. Asia Pacific dominated the smart finance hardware market with a share of 35.8% in 2021. This is attributable to the growing demand for smart ATMs in BFSI coupled with the rising smart city initiatives across the region.

Who are the key players in the smart finance hardware market?

What are the factors driving the smart finance hardware market?

b. Key factors that are driving the smart finance hardware market growth include the rising adoption of smart ATMs across smart cities, and the rising technical development in IoT technologies, such as the integration of data analysis tools across the world.