The global sports technology market size was valued at USD 11.70 billion in 2020 and is expected to register a compound annual growth rate (CAGR) of 16.8% from 2021 to 2028. The rising adoption of emerging technologies, such as the internet of things (IoT) and data analytics, along with social media integration, across various sports, is expected to drive the market over the forecast period. A strong emphasis on audience engagement and entertainment activities coupled with the digital transformation of stadiums is anticipated to drive the demand for technology-driven services in the sports arena. The industry is experiencing a paradigm shift due to increasing investments by various organizations in adopting the latest technologies for monitoring players’ performance and engaging fans, among other activities. 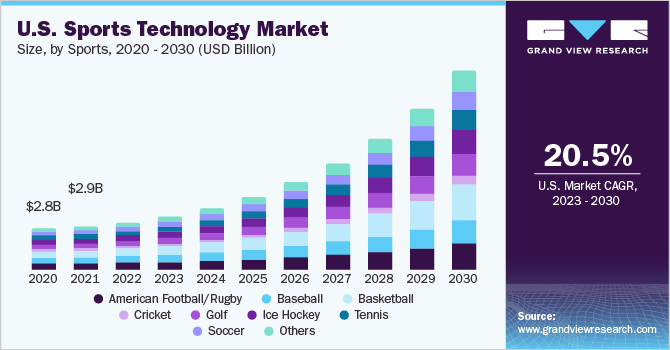 Moreover, investments in marketing, sales, and operations to increase the revenues of companies are also projected to support market growth. In addition, digitalization and artificial intelligence (AI) paves the way for developing the advanced sports arena. The growing number of sports leagues across the globe is creating substantial business opportunities in infrastructure development and advanced technical services. Professional sports associations and franchise leagues are increasingly adopting new and innovative technologies, such as smart stadium, data analytics, wearables, and digital signage. For instance, in 2018, FIFA approved the use of wearables during the live game to track players’ performance. The International Cricket Council (ICC) has also embraced various technologies, such as Spidercam, DRS, Snickometer, and Hawkeye.

Franchise owners are investing in new technologies and tools to improve players’ performance and expand business opportunities. The franchise model has particularly transformed the industry by providing several benefits, such as financial viability and profitability, to players, organizers, and investors. The franchise model typically envisages investors buying teams with territorial rights. The franchise can establish revenue sharing models for games, events, merchandising, and players. The league franchise model helps create longevity and enhance professionalism, which drives the demand for advanced technologies during the game.

The Covid-19 pandemic has taken its toll on several industries including sports and related industries, such as technology, broadcasting, transportation, and hospitality. Many tournaments and game events, including the Olympics, have either been postponed or their format has been altered. As a result, stakeholders in the market are trying to assess the downstream impact arising from disrupted cash flows, insecurities, and the potential declines in long-term attendance and engagement.

The lockdowns imposed by the governments of China and other Asian countries in Q1/2020 and Q2/2020 adversely affected the production of wearables and digital signage. The limited staff and reduced working hours particularly restricted the development, manufacturing, and sales of wearables and digital signage. The distribution network was shut temporarily in several locations due to the restrictions imposed by various governments, thereby limiting the growth of the devices segment in H1/2020. The cancellation of some of the Esports events led to a fall in merchandise revenue and ticket sales. The revenue growth plummeted in 2020 as a result of the aforementioned factors.

The smart stadium segment accounted for the highest revenue share of over 57% in 2020. Smart stadium technology helps in enhancing the audience experience, increasing profitability, and strengthening stadium security. The technology comprises several sensors, cameras, and digital signage to provide real-time information on parking slots, ticketing lines, and food concessions, and other related information. The adoption of innovative solutions based on IoT can particularly help in designing stadiums with interactive seats, secured wireless connections, and high-definition video screens for the live game.

The smart stadium segment has been bifurcated into software and services. The software segment accounted for the highest revenue share in 2020 owing to the rising demand for building automation software for energy-efficient and secured stadiums. Factors, such as the growing need for environmental monitoring, assets management, and cleanliness and hygiene management within stadiums are expected to drive the software segment. Office automation, ticket management, and crowd management are some of the major components of a building automation system. In August 2019, FK Austria Wien, a football club based in Austria, appointed ABB to provide smart building technology and an effective power distribution network for the Generali Arena football stadium.

The increasing viewership of Esports bodes well for the growth of the market. Esports audience grew by almost half a billion in 2020, thereby directly contributing to the revenue growth. People preferred spending more time watching their favorite Esports tournaments, such as the League of Legends European Championship and PUBG Mobile World League 2020, during the lockdown. These Esports tournaments engaged millions of fans the same way conventional sports can do. As a result, many sponsors and investors are finding these tournaments highly lucrative.

The Esports segment has been further divided into tickets & merchandise, sponsorship & advertisement, and others. The sponsorship & advertisement segment dominated the market in 2020 and is expected to retain the leading position over the forecast period. Esports offers a direct opportunity to reach the target audience during online and offline events leveraging video displays, posters, interactive advertising, and freebies. As a result, many non-endemic brands, such as McDonald's Corporation, Daimler AG (Mercedes Benz), Tinder, and Vivo Communication Technology Co. Ltd., have endorsed themselves as key sponsors for Esports teams and tournaments. Non-endemic brands including AT&T Inc.; Nike, Inc.; The Coca-Cola Company; and Nissan Motor Co., Ltd. signed almost 76 deals in Q1/2019.

The soccer segment led the market in 2020 with a revenue share of more than 15%. The International Football Association Board approved the use of electronic tracking systems in 2015. In March 2018, FIFA allowed team analysts to share the players’ performance data with the coaches in real-time during live matches. Video Assistant Referee (VAR) was first used in the 2018 FIFA World Cup to help on-field referees in making decisions. In soccer, the technology can be used to gain actionable insights into a players’ fitness and make informed decisions. At the same time, digitalization also allows fans to interact with football clubs way beyond the 90 minutes of the actual playtime. As a result, despite the initial slow momentum, the adoption of technology has been gaining traction in soccer in recent years. In November 2019, Australia’s national soccer team announced a long-term partnership with STATSports Group for implementing a GPS player-tracking system. 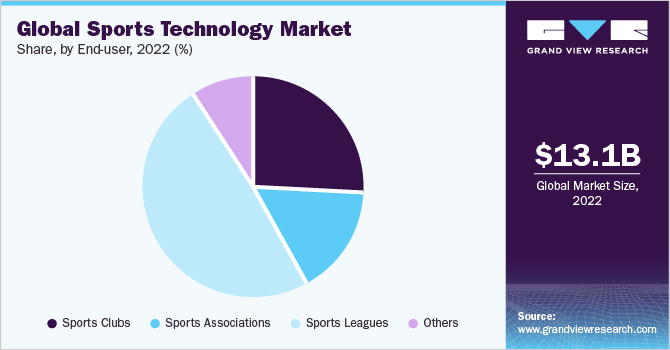 The basketball segment is expected to register the fastest CAGR of over 18.0% from 2021 to 2028. The National Basketball Association (NBA) has realized several benefits due to the adoption of data analytics, mobile apps, wearables, and heart rate sensors. All the 30 NBA teams established their analytical department in 2020 to optimize the training sessions and improve the game-day performance. The association is also incorporating the latest technologies, such as Virtual Reality (VR) and Augmented Reality (AR), for audience engagement. Given the ongoing pandemic, NBA has provided smart rings to all the players. The smart ring can measure body temperature, respiratory functions, and heart rate, and potentially notify about any sudden changes in these parameters.

Europe led the global sports technology market in 2020 with a revenue share of over 30% and is expected to continue dominating the market over the forecast period. Europe is home to several football leagues and most of these leagues have adopted technology in different forms. Europe is also home to several tier-2 and tier-3 football clubs. Smart stadium technology is gaining significant traction in Europe. The stringent public safety regulations enforced by the governing bodies to ensure the security of the spectators and the stadiums are expected to drive the regional market. Esports is also gaining traction in this region due to many partnerships and collaborations taking place in the market.

Asia Pacific is expected to emerge as the fastest-growing regional market from 2021 to 2028. China, due to the presence of a large number of market participants, led the APAC regional market in 2020. As a host of the Tokyo 2020 Olympics games, Japan is also set to contribute significantly to the region’s growth. India has also made significant strides in sports technology over the past couple of years owing to the growing popularity of sports and subsequently the rising number of sports leagues. Other countries, including Australia and Singapore, are also renovating the existing stadiums and constructing new ones featuring smart technologies, which will support market growth.

Major companies are focused on striking strategic partnerships and collaborations to gain a competitive advantage in the market. For instance, in October 2019, Modern Times Group (MTG) formed a strategic alliance with the Dutch football league Eredivisie to scale and improve FIFA 20 e-league. In April 2019, SAP SE collaborated with Team Liquid, an Esports team owned by Disney, to co-innovate and offer in-game data analysis-based feedback to improve player performance.

The market witnessed several M&A activities over the past few years. Companies also adopted inorganic growth strategies to gain a competitive edge. For instance, in July 2019, Telefonaktiebolaget LM Ericsson collaborated with AT&T to offer a 5G network infrastructure for MGM Resorts NBA Summer League. The collaboration envisages allowing the audience to participate in the games in a new way by streaming live video via the Samsung Galaxy S10 5G device. In August 2018, Tech Mahindra Ltd. made a 4-year deal with the U.S. football team Jacksonville Jaguars to provide modern tools based on AI and data analytics, among other latest technologies, to enhance the audience experience. Some of the prominent players in the global sports technology market include:

This report forecasts revenue growth at the global, regional, and country levels and provides an analysis of the latest industry trends in each of the sub-segments from 2017 to 2028. For the purpose of this study, Grand View Research has segmented the global sports technology market report on the basis of technology, sports, and region:

How big is the sports technology market?

What is the sports technology market growth?

Which segment accounted for the largest sports technology market share?

b. Europe dominated the sports technology market with a share of 30.1% in 2020. The growth of the region can be accredited to the wide-scale adoption of advanced technologies in stadiums, coupled with an increasing number of sports leagues/events.

Who are the key players in the sports technology market?

What are the factors driving the sports technology market?

b. Key factors that are driving the sports technology market the significant improvements in audience engagement and upcoming sports events and growth include the growing number of sports leagues across the globe.