The global steam turbine market size was valued at USD 16.0 billion in 2021 and is expected to expand at a compound annual growth rate (CAGR) of 2.4% from 2022 to 2030. An increase in the number of power plants is likely to be commissioned to compensate for the energy deficit and this is expected to propel the demand for steam turbines in the coming years. 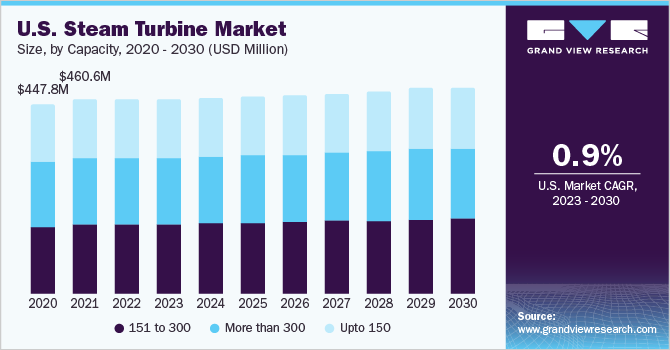 The U.S. emerged as the largest market in North America in 2021. An increase in the number of combined-cycle natural gas plants in the country as they are reliable sources of energy is one of the prominent reasons for the rising demand for steam turbines in the U.S. Policymakers in the country are focusing on developing sustainable energy generation plants. This is anticipated to surge the number of steam turbine installations in the U.S. in the coming years.

The increasing focus of the Government of the U.S. on establishing energy-efficient and clean power generation plants is also contributing to the surge in the number of CHP installations in the country. The rising demand for combined heat and power across North America is expected to fuel the growth of the market in the region during the forecast period.

Policymakers in the U.K. are focusing on reducing carbon emissions and carrying out energy-efficient power generation. This has resulted in the formulation and stringent implementation of various environmental and emission norms in the country. Steam turbines are employed in industrial applications for use in CHP units.

In terms of revenue, more than 300 MW accounted for the largest share of over 60.0% in 2021. Up to 150 MW capacity steam turbines are expected to witness significant growth during the forecast period on account of the increasing demand for industrial CHP units. CHP units are getting popular across various process industries on account of their superior efficiencies over single units. CHP also serves as a source of direct power, electricity, and heat, and it has observed a surge in demand in the recent past. Based on capacity, the market has been segmented into up to 150 MW, 151 to 300 MW, and more than 300 MW.

Due to the high demand for small steam turbines in small- and mid-sized combined cycle power plants (CCPP), combined heat and power (CHP), petrochemicals, biomass, and concentrated solar power (CSP) solutions, the 151 to 300 MW segment is expected to witness the highest growth during the forecast period. In addition, vendors manufacturing steam turbines are more focused on the small steam turbines category due to the high demand from steel, cement, chemical, and other industries.

The demand for large-capacity steam turbines is expected to observe a decline due to the transition to renewable and clean energy technologies from coal-based power technologies in countries across the globe. However, increasing demand for uninterrupted power supply from developing countries such as China and India is expected to add to the market value of large-capacity steam turbines during the forecast period.

In terms of revenue, the power and utility segment led the market in 2021 by accounting for a share of over 85.0%. This segment is expected to maintain its dominance in the market during the forecast period. Steam turbines have been traditionally employed in electrical power generation applications. Based on end-use, the market has been segmented into power and utility, and industrial.

Steam turbine units can be paired with any combustion fuel, however; coal has been the preferred fuel in the past. Increasing environmental concerns have restricted the usage of coal-fired power plants and clean energy sources such as natural gas. Moreover, the usage of renewable energy resources has become the need of the hour. 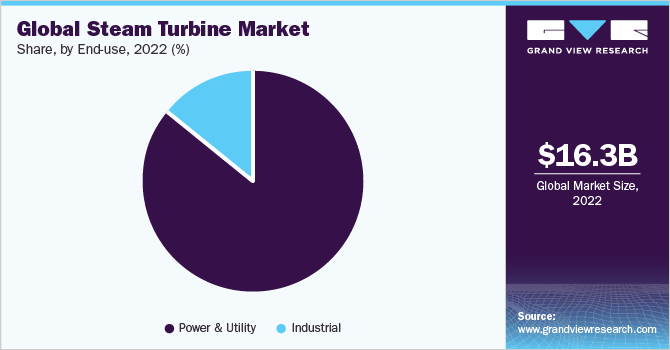 The Asia Pacific region held the largest revenue share of over 70.0% in 2021. The region is expected to register the highest growth rate during the forecast period. The Asia Pacific is expected to maintain its dominance in terms of both volume and value as the construction of a number of fossil and biomass power plants is underway in countries such as Indonesia, South Korea, Thailand, Bangladesh, and Japan, which will support the growth of the market during the forecast period. The demand for electricity is intensifying in the region on account of the growing population and rapid industrialization. This, in turn, is driving the need for the development of clean coal technology, thus boosting the demand for steam turbines.

Steam turbines are widely used in CHP applications in the U.S. Unlike gas turbines and reciprocating engine CHP systems wherein heat is a byproduct of the power generation process, steam turbine-based generators normally generate electricity as a byproduct of heat (steam) generation. Steam turbines use separate heat sources and as such, fuel is not converted to electric energy by them. The energy is transferred from boilers to turbines through high-pressure steam that powers turbines and generators.

Steam turbines are widely used for CHP applications in Europe. Extraction-condensing type steam turbines are used in large industrial CHP applications. These turbines are deployed in combined-cycle plants wherein they extract a portion of the steam for the process. There are a large number of independent power producers (IPP) in Europe using combined-cycle power plants, which operate on natural gas to provide power to electric grids and steam to one or more industrial customers.

In Russia, the demand for power and heat is rapidly increasing in the country, thereby pushing the limits of current production throughout the country. Moreover, high-energy industrial users in the country take into account the value of onsite power generation and self-generation in wake of rising electricity prices and concerns related to the uninterrupted and secure power supply.

Ongoing globalization is the key to market competition with international trade forming an important aspect of sustainable growth. Most of the players have established joint ventures with several customers and suppliers in various countries globally that help increase their market shares, decrease their costs, and enable them to gain access to new markets.

Well-known industry players across the market are mainly focusing on various key premeditated assets that include product customization, development of innovative product ranges, and inorganic growth ventures as part of their plan. Additionally, for up-gradation and maintenance, market players are also providing services to gain competitive benefits over other market players. Some prominent players in the global steam turbine market include:

This report forecasts revenue and volume growth at the global, regional, and country levels and provides an analysis of the latest industry trends and opportunities in each of the sub-segments from 2019 to 2030. For the purpose of this study, Grand View Research has segmented the global steam turbine market report based on capacity, end-use, and region:

Who are the key players in steam turbine market?

How big is the steam turbine market?

What is the steam turbine market growth?

What are the factors driving the steam turbine market?

b. Key factors driving the growth of the steam turbine market include the development of large-scale fossil-fuel-based power plants to fulfill growing power demand in various countries.

Which segment accounted for the largest steam turbine market share?

b. Power & Utility was the largest end-use segment accounting for 89.68% of the total volume in 2019 owing to the deployment of a number of large-scale power projects.