The global stethoscope market size was valued at USD 400.8 million in 2019 and is expected to grow at a compound annual growth rate (CAGR) of 4.9% from 2020 to 2027. Increasing cardiovascular and stethoscope market pulmonary diseases, as well as a surge in the aging population, are the major factors expected to drive the market. In addition, the adoption of technologically advanced medical devices such as Bluetooth integrated stethoscopes and various government initiatives are few more factors contributing to the growth of the market. 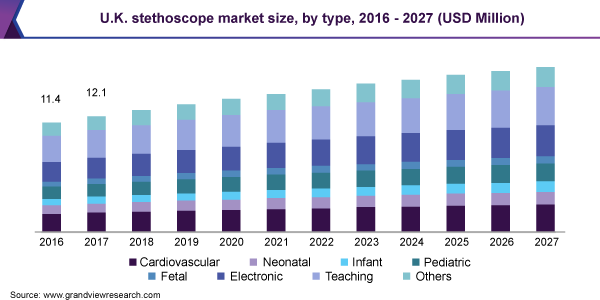 Increase in geriatric population has increased the demand for advanced stethoscopes for the primary diagnosis of numerous chronic health ailments. As per the CDC, it has been recognized that people aged above 65 years are at a higher risk of developing severe health problems such as heart disease, common cold and flu, asthma, chronic obstructive pulmonary disease, and other conditions. According to the World Ageing 2019 report, it is estimated that there were about 703.0 million population aged 65 years or over globally in 2019. This number is estimated to double to 1.5 billion in 2050. This factor is anticipated to be one of the high growth rendering factors for the market.

Rising prevalence of heart-related diseases and various respiratory diseases such as asthma, acute bronchitis, emphysema, cystic fibrosis is propelling market growth. As per the World Health Organization (WHO) 2018, most chronic disease deaths are occurring due to cardiovascular diseases which account for 17.9 million people annually. More than 75.0% of deaths occur in low- and middle-income countries. According to the same source, in 2019, around 235.0 million people are living with asthma around the world. For the primary diagnosis of cardiac dysfunction and phlegm in the respiratory tract, a stethoscope is widely used to primarily examine such conditions. Thus, an increasing number of patients suffering from cardiovascular and numerous types of respiratory diseases are majorly driving the market.

Furthermore, increasing number of initiatives and programs being undertaken by governments of various countries to improve public awareness and treatment related to chronic disorders is expected to fuel market growth. For instance, in 2016 the WHO had launched an initiative called “Global Hearts” to fight against heart attacks. Similarly, a national initiative called “Million Hearts 2022” is taken to prevent 1.0 million heart attacks within 5 years. It is a combined initiative led by the Centers for Medicare and Medicaid Services (CMS), and the Centers for Disease Control and Prevention (CDC). Moreover, the British Lung Foundation (BLF) in the U.K. has introduced “Listen to your lungs” campaign. This plan increases awareness that breathlessness can be a symptom of Chronic Obstructive Pulmonary Disease (COPD) as well as encourage people to ask healthcare professionals about their breathlessness. This growing awareness among people regarding the treatment and initiatives taken by the government to prevent the rate of associated disorders is likely to boost market growth.

Countries such as the U.S. and Canada have witnessed a high prevalence of chronic disorders in recent years. As per the American Heart Association's "Heart Disease and Stroke Statistics 2019, 121.5 million adults in the U.S. are living with cardiovascular disease and every year 805,000 Americans suffer from a heart attack. Furthermore, according to the Institute for Health Metrics and Evaluation (IHME) data published in 2017, ischemic heart disease was the leading cause of deaths and disabilities in Canada, and this number is expected to double in next 20 years. Therefore, such a high prevalence rate of chronic disorders particularly cardiovascular disorders is anticipated to boost market growth over the forecast period. Additionally, an increasing number of hospitals, healthcare institutions, and research centers are also contributing to market growth.

Additionally, increasing incidence of chronic disorders in developed and developing countries has driven the launch of technologically advanced products in the market. For instance, in 2019, Eko Devices Inc. has launched an all-in-one Core digital stethoscope. It is a fully assembled stethoscope or act as an attachment for most existing stethoscopes, which means it is compatible with any analog stethoscope models. It attaches to the physician’s own stethoscope and improves auscultation. Additionally, it supports wireless auscultation to maintain a safe distance from patients with infectious diseases. Market players are making constant efforts for introducing technologically advanced products in the market. 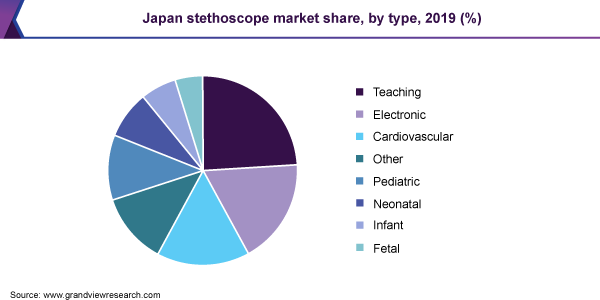 North America dominated the market with a revenue share of 33.1% in 2019. This is attributable to the awareness campaigns regarding chronic disorders and greater incidence of heart and lung disease in the continent, the presence of well-established healthcare facilities in the region, and increasing government initiatives. For instance, according to the American Heart Association 2016, almost 121.5 million adults had some form of cardiovascular disease from 2013 to 2016. Furthermore, the availability of technologically advanced products and the presence of major key players such as 3M, Eko Device, Inc, and Medline Industries are also contributing towards market growth in the region.

Latin America is expected to witness a CAGR of 5.3% from 2020 to 2027 due to factors such as, increasing incidence of chronic disorders, improving quality of diagnosis, and rapidly growing economy. In addition, increasing number of players interested in exploring market opportunities is also one of the major factors boosting the demand for stethoscope in this region. Moreover, increasing healthcare expenditure along with rising penetration of health insurance in most of the countries in the region are providing ample growth opportunities to the players operating in the market. For instance, according to the WHO, in 2016, Brazil’s healthcare expenditure as a proportion of GDP was 8.5%, Argentina’s accounted for 4.2%, Mexico accounted for 6.5%, and Chile’s spending was 8.3%.

The key market players are focusing on the launch of innovative types of medical devices, technological advancements, and growth strategies. For instance, in May 2018, 3M has launched a ‘Single-Patient Stethoscope’ to overcome the issues using disposable stethoscopes such as inadequate audibility, lack of durability, and discomfort faced by healthcare professionals. The device is intended to provide excellent sound quality, comfort, and to boost patient care while helping minimize the risk of cross-contamination in an isolated environment. These advancements in the area of stethoscopes are anticipated to boost market growth over the forecast period. Some of the prominent players in the stethoscope market include:

This report forecasts revenue growth at global, regional, and country levels and provides an analysis of the latest industry trends in each of the sub-segments from 2016 to 2027. For the purpose of this study, Grand View Research has segmented the global stethoscope market report based on type and region:

How big is the stethoscope market?

What is the stethoscope market growth?

Which segment accounted for the largest stethoscope market share?

b. North America dominated the stethoscope market with a share of 33.1% in 2019. This is attributable to the rise in chronic diseases such as cardiovascular and respiratory disorders, owing to the unhealthy lifestyle coupled with the presence of the sophisticated healthcare infrastructure.

Who are the key players in stethoscope market?

What are the factors driving the stethoscope market?

b. Key factors that are driving the market growth include increasing prevalence of cardiovascular and respiratory diseases, increasing application of digital stethoscope in the diagnosis of chronic conditions, and rapid technological advancements in the stethoscope.